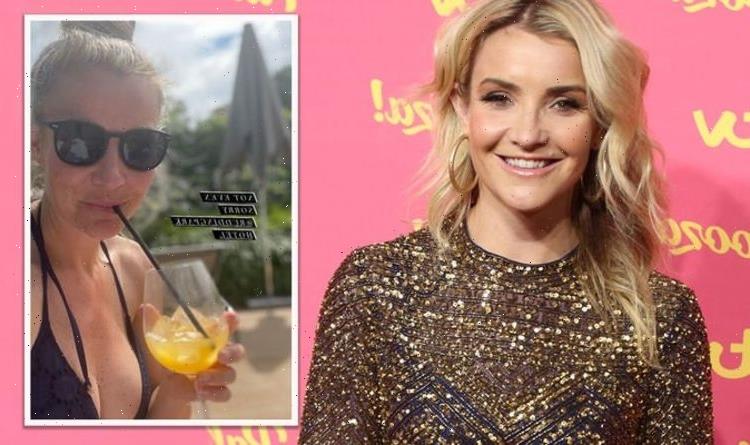 Helen Skelton stuns in denim on Summer On The Farm

Helen Skelton took to social media yesterday as she soaked up the sun at a luxury spa hotel, before heading home to watch the England game with her family. The This Week On The Farm star could be seen sipping a cocktail as she made the most of the warm weather and sunshine in a bikini.

The 37-year-old TV star put on a busty display as she posed for the camera in her black swimwear.

The mum-of-two swept her hair away from her face and styled it in a high bun, as she enjoyed some down time.

Helen completed her summery look with a pair of stylish dark sunglasses.

“Not even sorry @ruddingparkhotel,” she captioned the snap, which she shared with her 244,000 followers.

The Countryfile star admitted that she doesn’t get too “hung up” on the negative comments she receives.

It comes after the TV presenter faced backlash for her outfit choices while presenting the Olympic Games coverage in Rio de Janeiro in 2016.

She came under-fire for wearing a short skirt while fronting the swimming events.

However, Helen doesn’t let the comments affect what she wears and what she shares online.

In a new interview, she said: “Maybe I’m too needy but no I don’t [worry], I know it sounds stupid but I don’t have time for that.”

“It doesn’t bother me what some random person I’m never going to meet thinks about my skirt!” Helen continued.

Following her relaxing day at the spa, Helen headed home to watch the football with her rugby star husband Richie Myler and their children Ernie, six, and Louis, four.

She posted a throwback picture of her eldest son at his first match and told fans that he was now “analysing the England game”.

“Every age has a stage,” she went on to reflect amid the match.

In an update this morning, she explained that her boys had got caught up in the sporting drama, as England made history by securing a place in the final of Euro 2020.

“Still can’t decide if I am elated or concerned that my boys are showing early signs they will be fully signed up members of the ‘sport rules my life and emotions club’.”

“Spent half the night saying ‘if England don’t win it doesn’t matter.’

“But we all knew I didn’t mean it.

“Thank you @england for lifting the nation…” she signed off with several blowing a kiss emojis.