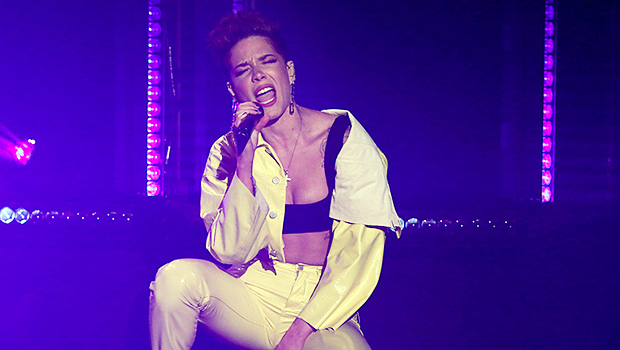 Hello, sunshine! Halsey brightened up the stage during her performance on ‘Ellen’ with a pair of yellow leather pants and a matching jacket, and we’re obsessed. Watch her performance here!

We’re in the presence of a goddess! Halsey, 24, slayed her performance of her new song “Without Me” on Ellen, strutting her stuff on set in a sexy, leather and denim outfit. This wasn’t just your typical black motorcycle jacket. Instead, Halsey rocked a stylish, cropped jacket and matching high-waisted, leather pants in a sunny yellow color. She was the perfect mix of classic cool and totally on trend, especially when paired with a black sports bra, chain earrings, and zebra sock booties. We’re obsessed!

This is actually an outfit repeat for Halsey. That’s how much she loves this look! She rocked it on Instagram on November 29, and revealed that it was inspired by David Bowie. As you can see in her post, Bowie once did a photoshoot in which he wore a bright yellow suit with a matching striped shirt and checkered socks. He’s the epitome of cool. With her hair currently tinted red, Halsey’s even paying homage to Bowie’s haircut!

The performance, of course, was perfection. Halsey sang her heart out for the song that fans believe is about her breakup with ex-boyfriend G-Eazy. It’s all about building up a love that later lets her down. She sings about giving love “about a hundred tries,” but the “demons in your mind” screwed it up. She looked anything but upset when she performed on Ellen, though! Her song is a ballad of empowerment, and she was totally grooving up there. She got a standing ovation from the audience, too!

Halsey also performed “Without Me” at the Victoria’s Secret Fashion Show, which aired on December 2. She looked stunning in a white crop top and feathers, but she wasn’t happy with the event. After she filmed the show in November, before the brand’s Chief Marketing Officer of L Brands, Ed Razek, made some offensive comments about trans and plus-sized models. Halsey released a statement condemning the company and asking fans to support LGBTQ organizations like GLSEN instead!

Laila Ali accidentally backs into pedestrian with her car

The nationwide YHA Australia chain of hostels has been accused of systematically underpaying backpackers by classifying them as volunteers but...

The nationwide YHA Australia chain of hostels has been accused of systematically underpaying backpackers by classifying them as volunteers but...