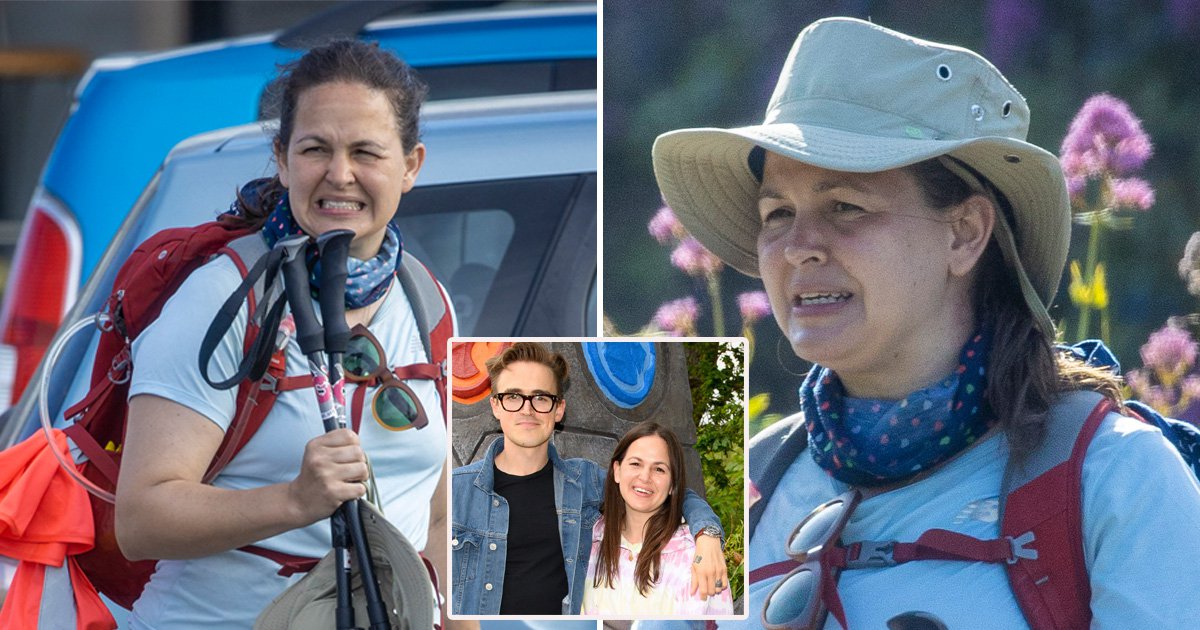 Giovanna Fletcher got back to business and joined a charity walk this week after it emerged she and husband Tom Fletcher claimed furlough money.

The I’m A Celebrity… Get Me Out Of Here star headed to Cornwall to take part in a charity event with CoppaFeel, raising money for Breast Cancer Awareness Week.

It had been rescheduled from last year where it was due to take place in the Sahara. Giovanna was active on her socials and kept fans up to date on her journey around the seaside town, sharing group photos with the other trekkers.

In one post, the 36-year-old wrote: ‘This week I’ve walked alongside the most incredible bunch of women, many of which have had to overcome physical hurdles, including breast cancer. To see them boshing the coastal path with confidence and determination has been such a wonderful sight…

‘Crossing the finish line united as one group after walking 100km of the coastal path (which was tougher and more brutal that we expected) – all to raise funds and awareness for @coppafeelpeople, the breast cancer awareness charity.’

Giovanna went on to list the concerning statistics that 55,000 women are diagnosed with breast cancer in the UK every year, as well as 400 men. She encouraged her followers to regularly check their bodies and go to their GPs straight away if they notice any changes.

The reality star continued: ‘This week I have been blown away by the love, strength, courage and unity of this glorious bunch. They’ve conquered fears, been there for each other and laughed and cried while doing so. So proud of everyone who took part, and the £200,000 that’s been raised to help spread the CoppaFeel! Message.

‘Thanks to everyone we met on the coastal path who cheered us on and heard us spread our boob love, to captains @mattjwillis @candicebrown and @samiramighty for encouraging your teams with such love and good humour, to the @coppafeelpeople team for allowing me the honour of continuing to head up these treks – especially @emmaacarroll1 who is one of the strongest and most organised people I know, to all at @charity.challenge who get us as a charity and help us all get the best out of ourselves and mostly thanks to the trekkers – you’re all flipping ace. Thank you a million times. I adore you. Xxxx

However, it wasn’t without its obstacles as Giovanna revealed she ‘decided to do a double forward roll almost off a cliff after getting my foot caught under a rock’.

It comes after the Happy Mum, Happy Baby podcaster and her McFly rocker husband Tom, 35, released a joint statement apologising after reports that they ‘claimed £30,000 from the Government’s furlough scheme’.

They explained: ‘While parts of the article were inaccurate (including all of the figures mentioned), it is true that we did follow financial advice to furlough someone we employ.

‘This was for a member of our team who couldn’t carry out their role due to the pandemic, and the scheme was suggested to us as the most effective way to give them job stability and security.

‘Although it was a time of great uncertainty, we clearly should have thought more about the situation and funded it ourselves.’

They concluded the post: ‘It was a huge error of judgement and a mistake we wholeheartedly take responsibility for and we have paid the full amount back. Gi and Tom x.’

Nets are reminder nothing is a sure thing
World News