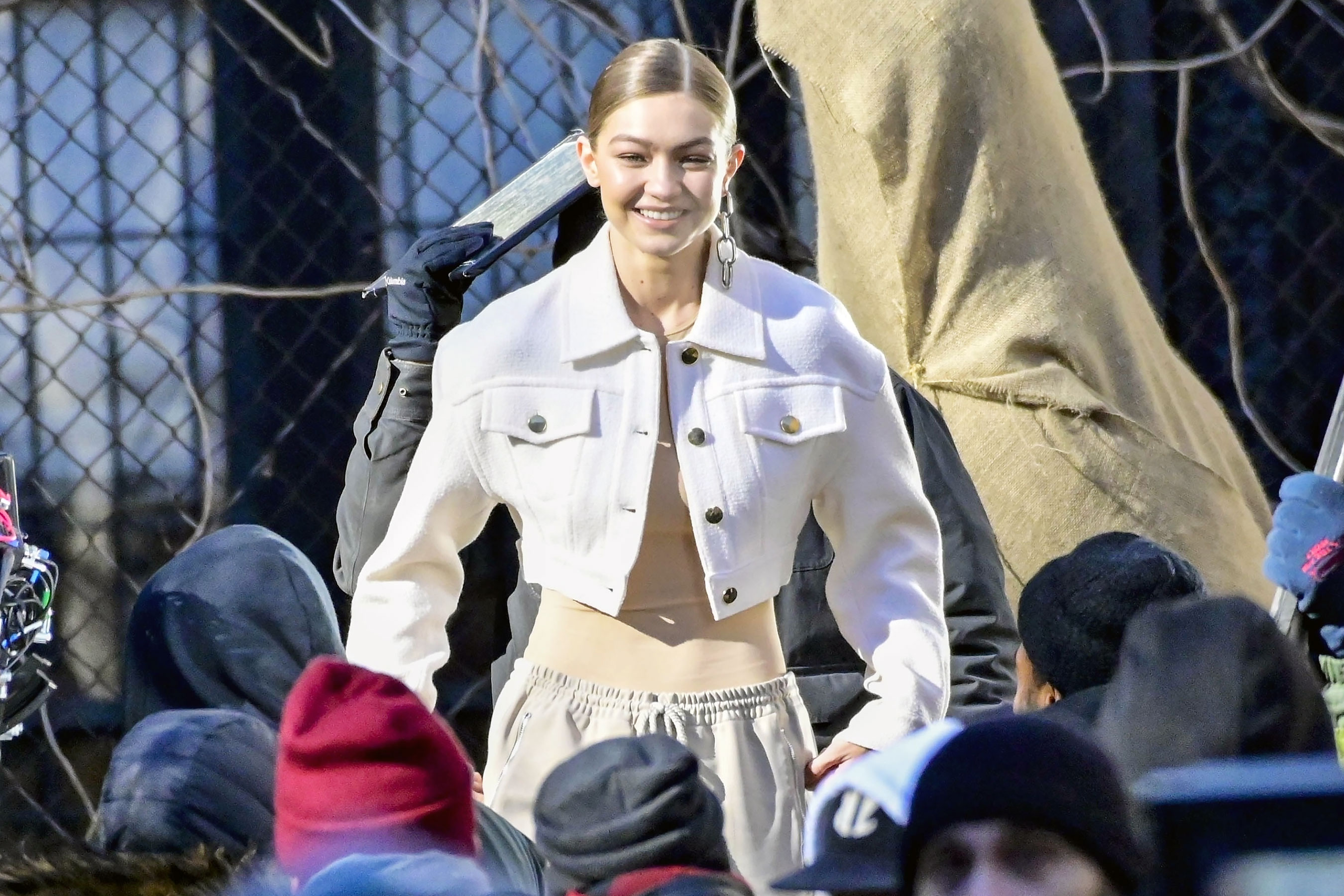 Gigi Hadid Gets to Work in N.Y.C., Plus Matthew McConaughey, Justin Timberlake & More

Gigi Hadid puts her best face forward during a photo shoot in N.Y.C. on Friday.

Matthew McConaughey and Anne Hathaway come together for a photo call for their fim Serenity on Friday in L.A.

Justin Timberlake brings T.I. on stage on Thursday during his Atlanta Man of the Woods tour stop.

Lamorne Morris heads into Build Studio in N.Y.C. on Friday.

Jenna Coleman stands out from the crowd during a walk through N.Y.C.’s East Village on Friday.

John Malkovich hops aboard a water taxi while shooting scenes for The New Pope in Venice, Italy, on Friday.

Lupita Nyong’o and Michael B. Jordan stick together at a Variety screening of Black Panther in N.Y.C. on Thursday.

Blake Lively and Ryan Reynolds make it a date with Emily Blunt at a New York City screening of Mary Poppins Returns on Thursday.

Real life … or reel life? Gerard Butler runs from the paparazzi while filming a commercial on Thursday in London.

Jamie Chung is anything but sour on Thursday at the Shopbop x Rhode Resort dinner at Chateau Marmont in L.A.

Brendon Urie belts it out as Panic! At The Disco kicks off the second leg of their Pray for the Wicked tour at KeyBank Center in Buffalo, New York, on Thursday.

Ashlee Simpson and Evan Ross put their heads together on Thursday night during their Atlanta tour stop.

A smiling Lana Condor arrives to The Tonight Show Starring Jimmy Fallon in N.Y.C. on Thursday.

Nick Offerman kicks back on Thursday at the Oxford Union in London.

Timothée Chalamet scores some swag on Thursday on the Los Angeles set of The Ellen DeGeneres Show.

Taylor Hill looks like the quintessential California girl during a Victoria’s Secret photo shoot in Venice Beach on Thursday.

Matthew McConaughey and Mahershala Ali hit their marks on Thursday at the True Detective premiere in L.A.

Sofia Richie looks chic on Thursday while waiting for her car in Los Angeles.

Keira Knightley signs autographs for fans during the Paris Premiere of Colette on Thursday.

Ryan Gosling is seen wearing a baseball cap and walking with a thick manuscript in L.A. on Thursday.

Meg Ryan bundles up for a walk in chilly N.Y.C. on Wednesday.

Kristen Stewart and rumored new girlfriend Sara Dinkin take their dogs for a walk in L.A. on Thursday.

Miss Universe 2018 Catriona Gray shows off her tiara at SiriusXM Studios on Thursday in N.Y.C.

Snoop hits the stage at The Grand in Boston, performing some of his tracks including “Next Episode,” “Still a G Thang” and “Drop It Like It’s Hot.”

Green Book star Mahershala Ali is all smiles as he arrives at Jimmy Kimmel Live on Wednesday in L.A.

On Wednesday, Joey Fatone chows down at the Home & Family studios in Universal City.

Gwyneth Paltrow lends a helping hand to host Jimmy Fallon during Wednesday’s episode of The Tonight Show in N.Y.C.

Blake Shelton performs at the C’Ya on The Flipside benefit concert, benefitting The Troy Gentry Foundation, at The Grand Ole Opry on Wednesday in Nashville.

Edie Falco, Jamie-Lynn Sigler and Robert Iler pose together at The Sopranos’ 20th Anniversary Panel Discussion at SVA Theater on Wednesday in N.Y.C.

Wednesday in N.Y.C., Whoopi Goldberg smiles with Jeff Daniels backstage after his performance in To Kill a Mockingbird on Broadway.

Ashley Graham leaves the N.Y.C. Today studios in a neon look after a Wednesday appearance.

Steve Harvey speaks at the Variety Entertainment Summit on Wednesday in Las Vegas.

Kevin Hart chats with host Stephen Colbert on Wednesday’s episode of The Late Show in N.Y.C.

Michael B. Jordan heads out in Los Angeles on Wednesday.

Emilia Clarke works on the London set of an upcoming movie on Wednesday.

Wednesday in N.Y.C., Bella Hadid serves up some looks at a Louis Vuitton dinner.

Gwyneth Paltrow shows off her winter whites as she hits the streets of N.Y.C. on Wednesday.

Kelly Rowland and Fabletics celebrate the launch of Rowland’s capsule collection for the brand at Casita Hollywood on Wednesday.

Lana Condor mixes and matches on Wednesday while leaving an interview with AM to DM by BuzzFeed News in N.Y.C.

A smiling Cobie Smulders greets fans outside the Good Morning America studios in N.Y.C. on Wednesday.

Tom Holland putts on the first green on Wednesday during the pro-am round of the Sony Open golf event at the Waialae Country Club in Honolulu.

Brie Larson hits the gym in Los Angeles on Wednesday.

Fresh off the Golden Globe Awards, Isla Fisher and her pooch pound the pavement on Wednesday in Los Angeles.

Lady Gaga holds hands with her mom Cynthia Germanotta at The National Board of Review Annual Awards Gala on Tuesday in N.Y.C.

Bradley Cooper and girlfriend Irina Shayk step out for another high-profile date night in coordinated plaid looks at The National Board of Review Annual Awards Gala on Tuesday in N.Y.C.

Vanessa Hudgens holds up a pint-sized fan at the press junket for FOX Television’s Rent: Live in L.A. on Tuesday.

Rami Malek and girlfriend Lucy Boynton go for a stroll in L.A. on Tuesday.

Terry Crews stops by Build Studio to discuss his shows American’s Got Talent: The Champions and Brooklyn Nine-Nine on Tuesday in N.Y.C.

Gina Rodriguez energizes the crowd while hosting Carmen Sandiego Day at the Adrienne Arsht Center in Miami on Tuesday.

Keegan-Michael Key busts a move in front of host Stephen Colbert on Tuesday’s episode of The Late Show in N.Y.C.

Rachel Weisz laughs onstage after the Museum of Modern Art’s Contenders screening of The Favourite on Tuesday in N.Y.C.

Gabrielle Union attends a tastemaker screening for If Beale Street Could Talk, hosted by Tracee Ellis Ross and presented by Gucci and RAD, in L.A. on Tuesday.

Tuesday in L.A., Noah Centineo poses at the premiere of Freeform’s Good Trouble at Palace Theatre.

The Bachelor’s Colton Underwood delights a fan by stopping for a selfie at Extra at Universal Studios Hollywood on Wednesday.

Ben Schwartz beams at a basketball game as the L.A. Clippers take on the Charlotte Hornets on Tuesday in L.A.

Kate Beckinsale dons a crop top for a Tuesday outing in L.A.

Andy Samberg gets into his character the Heckler during the “Peter and His Heckler” sketch on Tuesday’s episode of The Tonight Show Starring Jimmy Fallon in N.Y.C.

Cardi B opts for an all-purple ensemble — with hair to match! — in N.Y.C. on Tuesday.

Also taking N.Y.C. by monochromatic storm, Alice Eve, who brightens up a gray day at Build Studio on Tuesday.

Steve Coogan attends a special screening of Stan & Ollie at The Soho Hotel in London on Tuesday.

Pharrell addresses the crowd during a Sony press event for CES 2019 at the Mandalay Bay Convention Center in Las Vegas on Monday.

They’ve got moves! John David Washington and Kiki Layne give it their all on Monday night during a visit to The Late Late Show with James Corden in L.A.

Josh Hutcherson comes in peace on Monday’s episode of Live with Kelly and Ryan in N.Y.C.

Naomi Watts and Alfonso Cuarón put their heads together on Monday at the New York Film Critics Circle Awards in N.Y.C.

Mahershala Ali celebrates his Golden Globe win with a visit to The Ellen DeGeneres Show in L.A. on Monday.

Ashlee Simpson and Evan Ross hit the stage for a joint concert at The Bowery Ballroom in N.Y.C. on Monday night.

Zara and Mike Tindall take a break from their Australian vacation for a photo op on the beach on Tuesday.

Michelle Yeoh attends “An Evening with Michelle Yeoh” at the Museum of the Moving Image on Monday night in N.Y.C.

Jimmy Fallon and Lindsay Lohan get down with Tariq “Black Thought” Trotter and Steve Higgins on The Tonight Show in N.Y.C. on Monday.