Home » Celebrities » George H.W. Bush Laid To Rest Next To Wife Barbara & Daughter Robin In TX After Another Beautiful Funeral 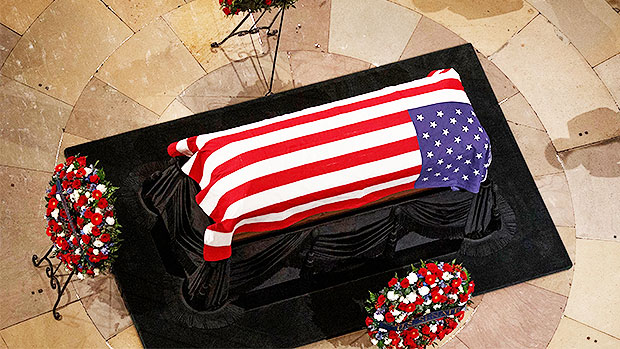 George H.W. Bush Laid To Rest Next To Wife Barbara & Daughter Robin In TX After Another Beautiful Funeral

After one last funeral, George H.W. Bush was laid to rest at his presidential library in Texas. Find out more about the emotional tribute to the late, former president.

After an emotional state funeral in Washington, DC, surrounded by friends and politicians, former president George H.W. Bush was laid to rest in a final ceremony of his home state of Texas on December 6. The Bush family, along with nearly 12,000 mourners, gave one last final tribute to Bush 41 at St. Martin’s Episcopal Church in Houston, where he and late wife Barbara Bush had attended services since the 1950s. In a heartbreaking touch, this was the same church where Barbara’s funeral was held just eight months ago.

After the funeral service, president Bush’s casket will be taken by a train, aptly named 4141, on a two-hour ride to College Station, where he will be be buried at his presidential library at Texas A&M University. Barbara and their daughter, Robin Bush, are both buried at the library. In a gut-wrenching eulogy at the DC funeral, former president George W. Bush said, through tears, that his father was “holding mom’s hand and hugging Robin now” in heaven. The 4141 train was painted for the president’s casket’s final trip to look like Air Force One, with the presidential seal and “George Bush 41” on the side of the front car.

Bush is actually only the second president to take their final journey on a train; Dwight D. Eisenhower did so in 1969. “I think it was because he knows that this route, and traveling by train, allows him to travel through the countryside that he loved so much between Houston and College Station and allow all those people who live along the route to pay their own tribute,” said Brenda Mainwaring, assistant vice president of public affairs at Union Pacific.

Our thoughts go out to the entire Bush family and the rest of President Bush’s loved ones. May he rest in peace.