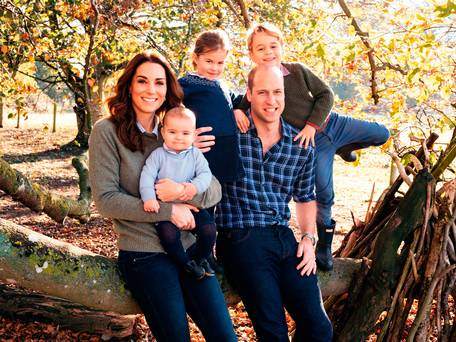 Kate Middleton and Prince William have issued a surprise – and adorable – Christmas card.

Prince Louis, who has only been pictured a handful of times since his birth in April, takes centre stage in his mother’s arms, while Princess Charlotte (three) and Prince George (five) pose playfully behind their parents on the grounds of their country home Amner Hall in Norfolk.

The picture, taken by Matt Porteous in the autumn, was released by Kensington Palace this morning and is markedly less formal than their choice last year. In comparison to the 2017 version, in which a then-pregnant Kate was clad in a Jackie-O style baby blue peplum dress and William in a suit, this time around, the happy family look relaxed all in jeans.

Prince Harry and Meghan Markle also released their own Christmas card this year, choosing a never-before-seen picture from their May wedding in which their arms are wrapped around one another as they watch a fireworks display at Frogmore House, a 17th century royal residence in Windsor near Frogmore Cottage, where they will live from early next year. They were photographed by Chris Allerton.

Both cards were released today, along with one from Prince Charles and Camilla in which the couple are pictured on a bench in their Clarence House garden gazing at each other.

In the Christmas photograph, the heir to the British throne is wearing an Anderson and Sheppard suit, shoes by Crockett and Jones and a Turnbull and Asser shirt. The message in the card reads: “Wishing you a very Happy Christmas and New Year.”

The photograph was taken by Hugo Burnand, who is used to working with members of the Royal Family as he took the wedding pictures of the Duke and Duchess of Cambridge’s nuptials in 2011 and Charles and Camilla’s big day in 2005.

Charles also asked the photographer to take the birthday image which marked his 60th year in 2008, and he has taken a portrait picture of the duchess.