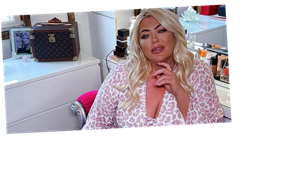 Gemma Collins has apologised to James 'Arg' Argent for sharing screenshots of their private conversation on social media.

In the now-deleted posts, 32 year old Arg cruelly branded Gemma, 39, a "hippo", after she suggested that he bought another woman dinner, instead of her.

Arg reportedly told the TV star that he wanted an open relationship like actor Will Smith and his wife Jada Pinkett Smith, who recently opened up on being intimate with other people during their marriage, but the pair allegedly split over the question.

However, Gemma has now apologised to Arg for sharing the explosive screenshots for her 1.9million Instagram followers to see.

In a new text message screenshot obtained by MailOnline, Gemma told him: "I'm sorry I put the messages up I was so hurt you suggested an open relationship it didn't look like a joke when you typed it I was so upset but I shouldn't have put the messages up that was anger on my part which was wrong I am sorry about that x."

OK! Online has reached out to both Gemma and Arg's representatives for comment.

In the original texts, which were shared on social media on Tuesday 14 July, Gemma began the conversation by saying: “What man pays for another woman!!!”, to which Arg responded: “Insensitive.”

Gemma, who was recently pictured having breakfast with a friend before sharing the texts, then replied with: “And the woman that saved your life has to pay for herself!!!”

The star’s next reply to Arg was not visible, and he wrote back: “You are supposed to be treating me you hippo.”

Writing over a screen grab of another WhatsApp conversation, in which an unknown sender sent her two pig emojis, Gemma told her followers that she is “heartbroken.”

She wrote: “Hey guys as you can imagine I am absolutely heartbroken right now shocked totally in pain and can’t ne pretending I’m all smiles over the gram. [sic]

"I am so upset and devastated and hurt, I need some time off the gram to heal x.” [sic]

Sources close to the couple told The Sun Online that Gemma is devastated, especially given she's recently lost three stone on the recommendation of her doctor to get herself in the best possible shape so that she can have a baby. And she's stood by Arg while he's battled his drink and drug demons.

A source told the publication: "Arg went to Spain and he told Gemma that he wants to go back there forever and be in an open relationship like Jada and Will.

"Gemma is completely shocked and has been left absolutely heartbroken, especially after sticking by him for so long.

"He said that he wants to stay in Spain for good which is worrying as he is known to have suffered relapses there in the past.

"Gemma was devastated by the conversation and decided to end their relationship entirely – she feels like she had no choice but to walk away."

Jennifer Lopez Has Had So Many Great Nail Art Looks, We Can't Pick a Favorite