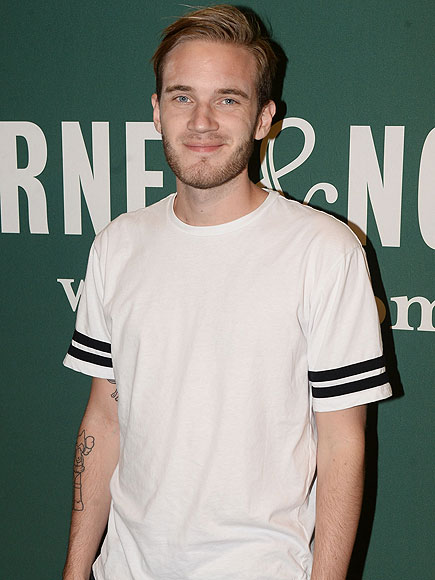 Kjellberg, better known as PewDiePie to his YouTube subscribers, came under fire in early 2017 when he posted a video that featured two men — whom he’d hired for the stunt — holding up a sign that read, “Death to all Jews.”

While many saw the act as anti-semitic, Kjellberg defended his choice to publish it, saying that he posted the video “to show how crazy the modern world is.” Not long after the video’s debut — which stayed up on his channel for over a month after its release — YouTube dropped the Swedish star, whose YouTube Red show was slated to premiere its the second season. “We’ve decided to cancel the release of Scare PewDiePie season 2 and we’re removing the PewDiePie channel from Google Preferred,” a YouTube spokesperson told Variety.

He stirred up controversey again in 2018 when he called fellow YouTuber Lilly Singh a “crybaby” and an “idiot” after she spoke out about wage and gender equality in the digital space.

Signh took the high road after Kjellberg’s rant, tweeting at him, “Hey @pewdiepie, I just followed you. Please follow me back again so I can DM you. Speak soon hopefully =) x.”

After falsely telling guests at a Walt Disney World resort in Florida that there was an active shooter on the property (and later telling police he was staging a YouTube stunt), Dillion Burch was arrested. The YouTube star was sentenced to three days in jail after pleading no contest in May 2018 to disorderly intoxication and disturbing the peace at a public lodging for the incident at Disney’s Contemporary Resort in Orlando, Florida, WKMG reported.

The 22-year-old social media star sparked severe outrage when he posted a controversial video in December 2017 that appeared to show the body of an alleged suicide victim in Japan’s ‘Suicide Forest.’

“This is not clickbait. This is the most real vlog I’ve ever posted to this channel,” Paul said in the YouTube video, New York Magazine reported. “I think this definitely marks a moment in YouTube history because I’m pretty sure this has never hopefully happened to anyone on YouTube ever. Now with that said: Buckle the f— up, because you’re never gonna see a video like this again!”

After experiencing backlash for posting the controversial video, Paul tweeted out an apology and made a pledge to take some time away from the spotlight. Three weeks later, the disgraced YouTube star posted a video on his channel, explaining his brief hiatus and addressing the social media attacks he experienced after releasing the initial vlog.

“I will never, ever forget who I am at my core and no one can make me think I’m something otherwise,” he said in his video. “And as long as I’m learning and improving and getting better as a person, then we good. … And even though I f—ed up — like, I’m an idiot — it doesn’t feel good to have millions of people telling you to go die.”

The social media star made headlines in 2017 when his neighbors began complaining about the noise and dangers  created by Paul — whose brother is Logan Paul — and his team of digital creators, all of whom shared his home in West Hollywood.

“I feel bad for them, for sure,” Paul said of his neighbors when local TV station KTLA visited his street. But he added: “There’s nothing we can do, though — the Jake Paulers are the strongest army out there,” referring to his millions of followers.

“We used to be a really nice, quiet street and now we’re just this, like, war zone,” neighbor Maytal Dahan told KTLA. “We’re families here, and we’re more than happy to have them live here if they’re respectful of their neighbors — but they’re not.”

Amid the neighbor drama, Paul was let go from his Disney Channel show, Bizaardvark.

The British social media influencer found herself in the middle of an online feud with Dublin-based hotel Charleville Lodge and its adjacent restaurant, The White Moose Café, following a request she made to stay at the property for free on Valentine’s Day 2018 in exchange for promotion on her site.

Café owner Paul Stenson responded to the influencer’s proposition — and his reaction was negative, to say the least. “It takes a lot of b***s to send an email like that, if not much self-respect and dignity,” he wrote in an open letter on Facebook. He continued: “If I let you stay here in return for a feature in your video, who is going to pay the staff who look after you? Who is going to pay the housekeepers who clean your room? The waiters who serve you breakfast? The receptionist who checks you in?”

Darby released a response claiming that Stenson’s black highlighter did not disguise her name well enough (although he said he did not realize this fact), and as a result, she dealt with “death threats and cancer wishes.”

“My issue was not with the idea that he had refused my stay. My issue was how he reacted,” she said in a video posted to her YouTube page. “A very simple way to have gone about it would have been a ‘no’ or for the email to be ignored instead of me having death threats and cancer wishes.”

A then-19-year-old Monalisa Perez said she accidentally killed her boyfriend and father of her two children, 22-year-old Pedro Ruiz III, in June 2017 when she shot him in the chest, according to the criminal complaint against her, which was obtained by PEOPLE. The two began posting videos to YouTube in May and hoped to grow their slowly-swelling popularity by filming a stunt in which Perez — who was pregnant at the time — shot directly at an encyclopedia that Ruiz was holding in front of his chest, the complaint stated.

In December 2017, Perez entered her plea in Norman County District Court to second-degree manslaughter. She was sentenced to six months in jail in March 2018.

The Maryland couple who ran a controversial YouTube channel, DaddyOFive — where they posted prank videos involving their blended family of five kids, specifically 11-year-old daughter Emma and 9-year-old son Cody — pleaded guilty in September 2017 to child neglect charges and were sentenced to five years probation each.

As part of their probation, the Martins will have no contact with Cody and Emma unless approved by a court, according to prosecutor Lindell Angel. They are also not allowed to film the kids for posting on social media.

The couple’s controversial videos — which featured Heather and Michael destroying the children’s belongings and berating and swearing at them until they cried — have since been taken off YouTube. The Martins have since resumed posting YouTube videos only of themselves, under the name “MommyOFive.”

Despite being cast opposite Amandla Stenberg in the feature film The Hate U Give — about a black teenage girl who becomes a social activist after witnessing a white police officer shoot her unarmed friend — the star was dropped from the project when a video of him making racist remarks surfaced on YouTube.

Lawley addressed his actions, calling them “mistakes,” on Twitter. “If u don’t learn from ur mistakes, u can never grow as a person,” he wrote. “I’ve learned a lot & i am grateful to have the power to change. i never want to be who i was yesterday. we’re in a constant battle to become a better version of ourselves, use ur voice as ur weapon.”

In 2015, Pepper posted a video called “Killing Best Friend Prank,” which featured a masked Pepper “kidnapping” fellow social media stars Sam Golbach and Colby Brock, and forcing Golbach to watch Pepper “shoot” Brock (who was in on the hoax the entire time), which left Golbach in distress. Although thousands of people called for the removal of the video, Golbach came to Pepper’s defense, saying the video’s message was “about living life to the full… not taking life for granted and loving it because it’s short.”

But that wasn’t the first time the Big Brother alum was embroiled in controversy. In 2014, the YouTube star posted a video titled “Fake Hand Ass Pinch Prank,” in which he pinched seemingly unsuspecting women’s behinds after asking them for directions. Since publishing the video, women came forward accusing the star of sexual harassment, which he denied. Pepper responded to the backlash by saying the video was staged and scripted. “It goes without saying you can’t go around touching people’s bums without asking,” he said in a video.

Martin and Cassel — known online as TmarTn and Syndicate, respectively — are major gamers whose videos heavily promoted Counter Strike: Global Offensive, which they regularly recorded themselves playing and gambling on. It seemed harmless enough until viewers learned Martin and Cassel weren’t being transparent and actually owned CS:GO Lotto, a gambling site affiliated with the game that allowed users as young as 13 years old to participate.

While Cassel apologized on Twitter, Martin showed no remorse for his actions. “I created the site. I wanted to build something awesome for other people to enjoy and I played on it,” Martin said in a 2016 YouTube video following the backlash, which began after the release of their now-deleted video, “How To Win $13,000 In 5 Minutes!”

He added: “Obviously, on my end, me playing on Lotto rather than other sites gives me an advantage because it promotes my own site, but it is not immoral, there is nothing wrong with it. I am 100 percent honest.”

How old is Liz McDonald actress Beverley Callard, when did she join Coronation Street and else has she starred in?

Ariana Grande Came Up With The Best Lines From The "Thank U, Next" Video
World News