Home » Celebrities » ‘Floribama Shore’ Preview: Nilsa Refuses To Let Gus Go After He Turns Her Down 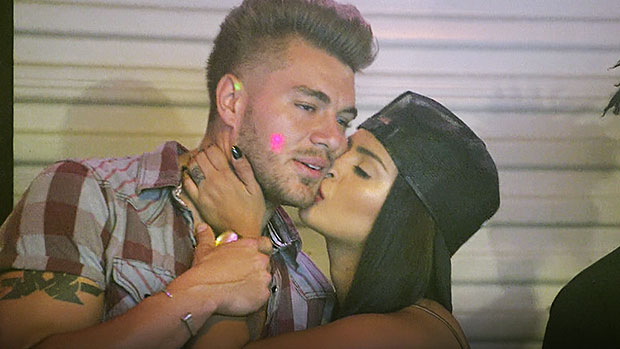 ‘Floribama Shore’ Preview: Nilsa Refuses To Let Gus Go After He Turns Her Down

In this EXCLUSIVE sneak peek of the Dec. 6 episode of ‘Floribama Shore,’ Gus realizes Nilsa isn’t on the same page as him about their relationship — so he pulls her aside for a chat about it. Watch here!

Gus Smyrnios and Nilsa Prowant have agreed to a friends with benefits relationship on Floribama Shore, and last week’s episode ended with them finally getting in bed together and hooking up. Unfortunately, it looks like they have their wires crossed about what that means for the rest of their summer vacation! HollywoodLife has an EXCLUSIVE sneak peek at this week’s episode, which shows Gus getting flirty with some girls at the bar…and Nilsa totally cock blocking him. “We know what this is,” he insists, when she tries to kiss him. “We can’t be hip and hip all the time. I don’t want to lead you on. I don’t want you to think when I go out, I’m not gonna flirt — because I am. That’s how I am.”

Nilsa tells Gus to “do you,” but it’s clear she’s still upset. “I’m a little pissed off at the whole situation,” Gus admits. “I’ve told Nilsa we’re not anything. I’m out talking to someone else, flirting, and she comes over and completely ruins my chances with her! So I pull [Nilsa] outside. She needs to learn that it’s probably time to move on from me.” Gus asks Nilsa what’s on her mind, and she admits she didn’t give him the “time [he] deserved” when he wanted to be with her last summer. Gus lets her know that being rejected by Nilsa “hurt” him, which is why he’s so hesitant now.

“You think you’re the first girl who’s done me like that? No,” he explains. “Nice guys get run over in this life. They do. I hate it, but they do. I’m not as much of a nice guy now and I have it much easier than I ever did. It’s just where I’m at, and if I could change it, I would.”

One last time, Nilsa asks for clarification about their relationship: “So we’re not going to be anything ever? Ever ever ever ever ever?” she asks. Gus lays it on straight in response. “As of now, no,” he tells her. “I’m bad news. I promise you don’t want nothing to do with me. I’m sorry, but that’s how it is.”

When Nilsa tries to insist that she just wants to have “fun,” Gus says that that’s all he wants to, but he’s come to realize that “that’s not what this is anymore.” In the end, Nilsa continues to hang onto Gus, and he desperately looks to Candace Rice to “save” him from the situation. We’ll have to wait until the episode airs on Dec. 6 at 9:00 p.m. on MTV to see what happens!

Who plays Chloe on Chicago Fire cast? Kristen Gutoskie is girlfriend of Cruz

Who voted for Gabby on Survivor? Ponderosa gets new tenant
World News