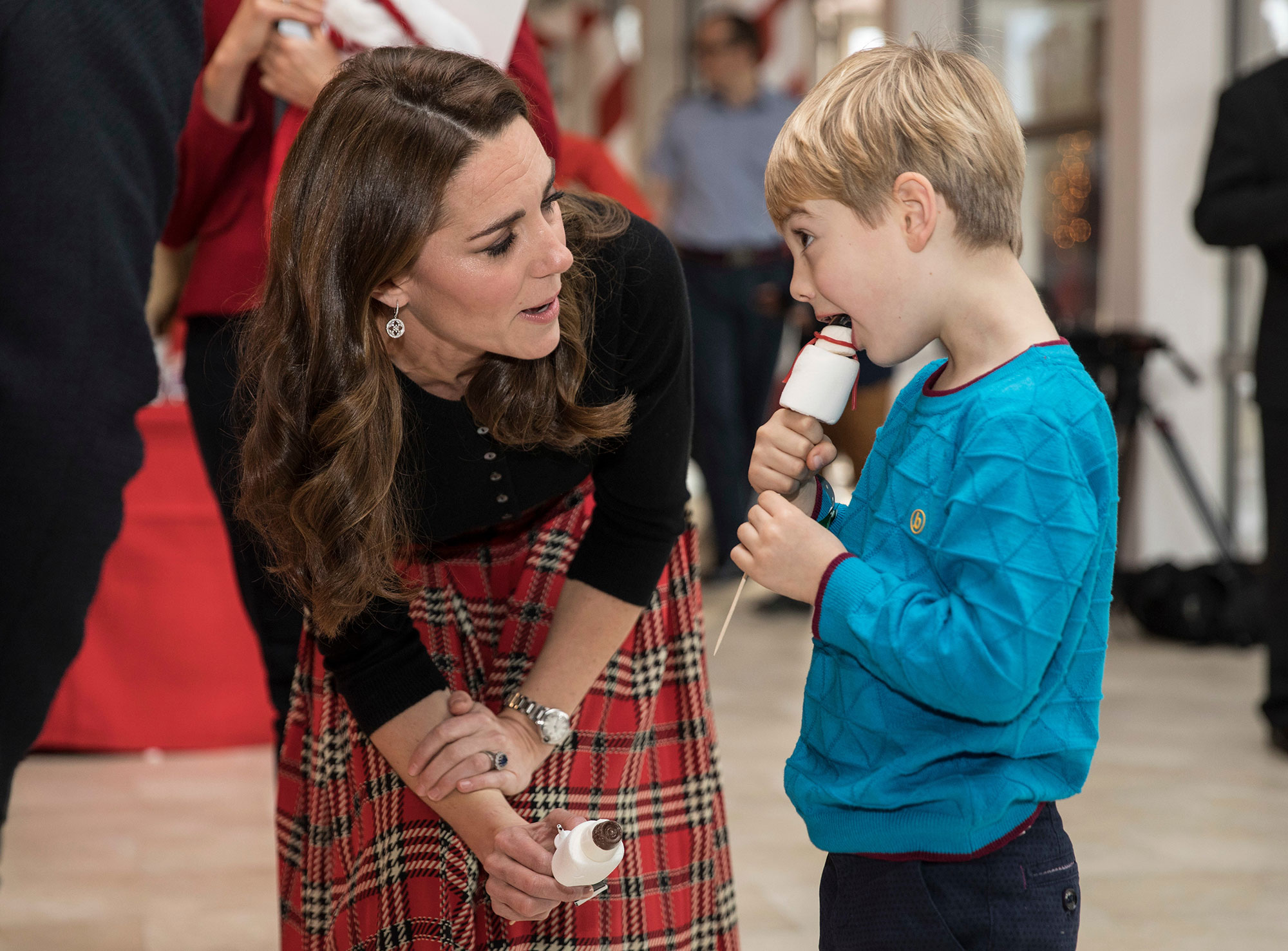 Prince William and Kate Middleton have officially kicked off their holiday celebrations!

On Tuesday in London, the couple hosted a party for military families at Kensington Palace.

The royal mom of three opted for a festive tartan skirt by Emilia Wickstead with a Brora cropped cashmere black cardigan and matching boots, while William wore a blue quarter-zip pullover for the festive occasion.

After Kate noticed a patch of “snow” on the ground, the pair were jolted by a blower dispensing the white stuff as they made their arrival to the bash. Kate and William then shared a laugh at their moment of surprise.

At the palace party, kids enjoyed an fun mix of activities, including a photo booth, Christmas stocking, snow globe decorating, cracker making and entertainment from U.K. party planners Sharky and George. Prince William, 36, even got in the holiday spirit by joining children in making crackers.

The event, in partnership with the Royal British Legion charity, was held at the palace’s Orangery, just a few hundred yards from where Prince William and Princess Kate live with their children Prince George, 5, Princess Charlotte, 3, and Prince Louis, 7 months. The area was decked out with Christmas trees and other decorations – and of course, there was an appearance from Santa Claus!

Kate gave a speech recalling when Prince William served as a helicopter pilot in the Royal Air Force.

“As someone whose husband has served, I know how hard it feels when a loved one leaves to do the job they trained for,” she said. “When William served doing search and rescue, I remember how I felt, but I can’t imagine how it feel when your loved ones are away on active service during Christmas. The absence of people you love must be especially hard at this time of year.”

The royal couple spent an hour and a quarter chatting to the families at the party as musicians from the Honourable Artillery Company played Christmas carols.

William and Kate helped make the festive treats and cards and joined in one game, Santa’s Footsteps, in which they had to pretend to be reindeer seeking sweets.

Kate also briefly joined in a snowball fight with the children before thinking better of it and handing her cotton wool snowballs over to the children.

“[Kate] appreciates what wives and families go through,” Natalie Bressani, whose husband is serving, told PEOPLE.

One woman asked William why he had not brought his own children to the party. As he crouched down making truffles with RAF children, he replied: “Because I can’t do this and look after the children.”

Kate also made sure to indugle in some sweet treats!

William suggested making sweets was his forte at this time of year. “She does the cards, and I do the chocolate,” he said, gesturing to his wife.

Even Santa Claus made an appearance to the Christmas bash!

The festivities took place a day before the royal parents fly out to the Royal Air Force base on Cyprus to visit the troops and deliver Christmas cards and gifts from their loved ones back home in the U.K.

On Wednesday, the royal couple will meet with serving personnel, those living on the base, station staff and members of the local community.

As William and Kate departed, members of their team tossed snowballs to them. William caught one before tossing it back, and Kate caught one as well, holding it as they walked away.