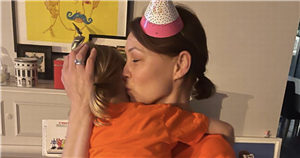 Emma Willis has marked her daughter Trixie's fifth birthday with a couple of intimate snaps.

The 45 year old, who recently trained to be a vaccine volunteer for St John Ambulance amid the pandemic, took to her Instagram feed to share the then-and-now photos for her 1.8million followers to see.

The first picture shows the mum-of-three with brunette hair as she lies on a hospital bed, holding her newborn close to her chest while looking lovingly down at her little face.

A second snap shows the star wearing a party hat as she holds her daughter, placing one hand on her head as she kisses her cheek. The pair look adorable as they wear matching orange T-shirts for the special occasion.

In the caption, Emma wrote: "Then and now… Holding her the same way, since the day she was born," followed by a heart eyes emoji.

"Happy birthday little one, we love you so very much. May the fourth be with you, always," she added with three red heart emojis.

While Paddy McGuinness added: "Beautiful," with a pink heart emoji.

Earlier in the day Emma shared a rare clip of her daughter Trixie unwrapping a pile of birthday presents in rainbow-themed wrapping paper.

"My little Trix is 5 today," the Emma captioned the sweet image alongside a red heat emoji. She chose Stevie Wonder's rendition of Happy Birthday to play in the background of the birthday post.

The pair have been happily married since 2008. However, former Busted singer Matt recently claimed that the Church of Scientology tried to break up his marriage to Emma. The 37 year old became a Scientologist and would make regular trips to the London headquarters after coming out of rehab following his drug and alcohol addiction.

However, his time within the religious movement didn't last long as he soon believed they were trying to isolate him away from friends and family and separate him from his wife Emma.

After joining, Matt, who was "lost in the world" following rehab, claimed he felt under pressure to commit after they discovered he was a celebrity.

He told The Sun: "What I was taking from it was that your environment, your friends and the people you're closest to are your problem.

"They were like, 'There's someone in your life who's actually draining you, who's a negative force, and it's normally the person closest to you'. And it's like, 'I think they're trying to split my f***ing marriage up now'." Matt quickly left Scientology after coming to the realisation.