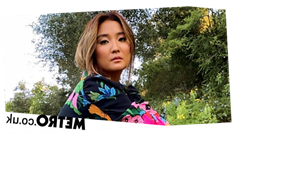 Emily In Paris star Ashley Park has got real honest about her experience of battling cancer when she was a teenager.

The actress, 29, who plays Mindy in the new Netflix series starring Lily Collins, said she believes it’s ‘important’ to talk about when she was ill and she credits it for making ’empathy’ her driving force in life.

Ashley was diagnosed with leukaemia when she was 15 and underwent chemotherapy to treat it.

In a new interview with Cosmopolitan, Ashley said: ‘Many times people bring up my cancer experience. I totally don’t mind talking about it.

‘I think it’s very important to talk about, but I also appreciate when I’m not asked to talk about the experience or about how it’s informed how I’ve lived my life.’

She said: ‘I never wanted to be just the Asian girl, just the “whatever” girl and then I got to 16 and I was the bald girl and the sick girl.’

Ashley said that she didn’t let her diagnosis define her and recalling having chemotherapy, she admitted she refused to think about the long-term effects the treatment could have on her.

‘I didn’t want to know that I might be infertile or that my heart might stop working or any of that stuff, because once you say it, you’re thinking about it,’ the star said.

‘Even though my body beat the disease, if I let it change anything, it’s won.’

Emily In Paris follows Emily, a twenty-something marketing executive (played by Collins), who’s sent to the city of romance for her dream job.

Created by Darren Star, the brains behind Sex And The City, the show landed on Netflix earlier this month and talk of a second season is already brewing.

Star has teased that there’s plenty of paths for the series to take, as he told E! News: ‘I don’t know about season two yet, but I think Emily has some surprising tough choices.

‘The show’s so much about the culture undermining her expectations of how things are and how things seem. And everything will not be as it seems.

‘It’s always about challenging her American worldview,’ he said. ‘We certainly have a lot of forks in the road and a lot of places to go.’