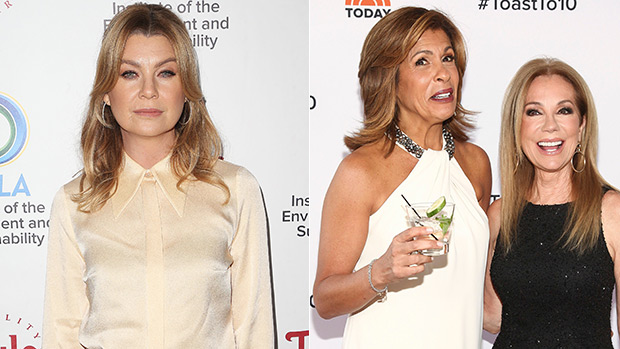 Count Ellen Pompeo out for Winesday Wednesday. The ‘Grey’s Anatomy’ star slammed Kathie Lee Gifford and Hoda Kotb for drinking on live TV! But, it’s part of a bigger conversation. Find out what happened.

Ellen Pompeo just hit Kathie Lee Gifford and Hoda Kotb where it hurts. The Grey’s Anatomy star playfully called out the TODAY hosts for their practice of drinking every morning on-air as part of a larger problem she has with the show. Ellen was upset that an article posted on Kathie Lee and Hoda’s official Twitter account focused on one part of an interview that she recently had, that she doesn’t speak with her former Grey‘s costar, Patrick Dempsey, anymore. While that was the juicy bit of her interview on Red Table Talk, the larger conversation was about raising biracial children with husband Chris Ivery.

“Hey here’s a suggestion!! Maybe all of you over there lay off the booze and pay attention to the real conversation that took place ? 🍷🍷🍷😜😜😜,” Ellen tweeted, linking to the TODAY article posted by @klgandhoda. She tweeted again almost immediately, clarifying that she didn’t have a problem with Kathie Lee and Hoda themselves: “@klgandhoda and whoever is in charge of this account.. the two women you work for deserve to be represented a bit more dignified.”

Ellen’s tweet coincidentally came the night before before NBC announced that Kathie Lee would be leaving TODAY after over 10 years hosting the show’s 4th hour. NBC News head Noah Oppenheim explained in a memo announcing the news that, “Kathie Lee’s plate has been overflowing lately with film, music and book projects and after giving us eleven extraordinary years, she’s decided to focus her attention full-time on those other creative endeavors.” Kathie Lee also confirmed she’s leaving during the December 11 episode.

While it’s certainly not the point of her interview, the information about Patrick Dempsey is interesting to Grey’s fans. She and her former TV husband haven’t spoken since he left the show, but it’s not because of bad blood. As Ellen puts it, after being on the show for so many years, people just have to adjust to their new lives. Nothing to see here, folks!

The 10 Best Gyms to Join Now