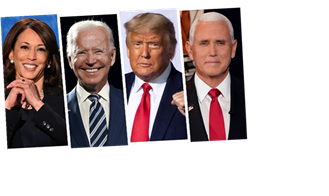 Joe Biden has been elected president of the United States. The 77-year-old has defeated President Donald Trump after a narrow race, CBS News reports. According to the outlet, Biden will win Pennsylvania, giving him the electoral votes needed to win, as ballots continued to be counted four days after Election Day.

Election Day 2020 arrived following months of political and social tensions stoked by the still-ongoing coronavirus pandemic, an economic crisis and continued racial injustice — with Trump and Biden offering very different futures for the American people and the American people awaiting the election results.

With Trump having commenced his reelection campaign the same day of his 2016 inauguration, Biden became the presumptive Democratic presidential nominee after Super Tuesday in March, although it would be made official in August when he accepted the nomination during the Democratic National Convention.

In March, the emergence of COVID-19 reached pandemic levels within the U.S. That same month, states began to implement stay-at-home orders among other quarantine and social distance measures that remain in place (to various degrees) to this day. The result has been widespread economic recession, mass cancellations and postponements across nearly every industry, and effects that will only become clear in time.

As the country grappled with the coronavirus, the police killing of George Floyd in May — as well as the murders of Ahmaud Arbery, Elijah McClain and Breonna Taylor, among too many others — sparked global protests amid a national reckoning around police brutality and in support of the ongoing Black Lives Matter movement.

In the weeks leading up to Election Day, as the national COVID-19 death toll passed more than 200,000 dead and protesting and retaliatory militia violence dominated news cycles, Biden and Trump met on the debate stage with American at home expecting answers to it all.

Viewers largely didn’t get that from the first debate on Sept. 29, which was set to touch on the Supreme Court, COVID-19, the economy, race and violence in U.S. cities and the integrity of the election. Over 90 chaotic minutes, there were countless interruptions, endless crosstalk and little to no decorum, to the point that the moderator had to implored Trump to stop cutting in.

Following the V.P. debate between Harris and Pence — infamously remembered as the one with the fly — the second presidential debate was cancelled in the wake of Trump testing positive for COVID-19. (First Lady Melania and a number of senior White House officials also test positive.)

In the final debate (held on Oct. 22 with the added ability to mute candidates’ microphones), the two nominees returned to the stage and proved polar opposites on the biggest issues affecting Americas today, issues voters thought about as the filled out their mail-in ballots or queued up to cast their vote in person. Now, Election Day is here and with it, our first inclinations of the future.