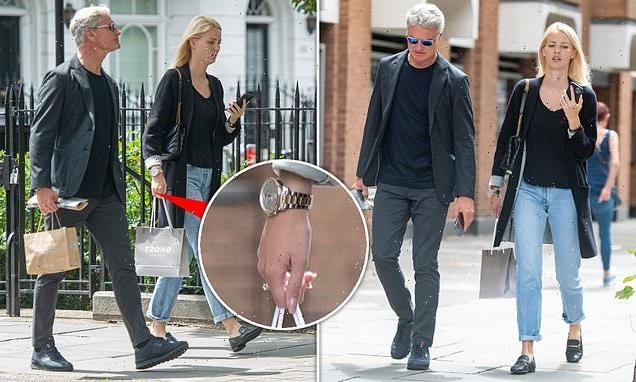 EDEN CONFIDENTIAL: Is Coulthard's new girl a 'wife' in the fast lane?

As a Formula One driver for 15 seasons, his career was built on speed. And it appears David Coulthard has applied the same talent to his love life.

The retired Scottish racing star, 51, has sparked engagement rumours after his girlfriend, Sigrid Silversand, was spotted wearing a huge sparkler on her ring finger just months after this newspaper revealed he had split from his wife, Karen Minier.

Swedish model Silversand, who’s in her mid-20s, was seen wearing the rock as the couple went shopping in London. The pair were first pictured together in January walking hand-in-hand and sharing several kisses in the capital.

In the same month, Amanda Holden also shared a picture of herself and her husband, Chris Hughes, with the pair as they enjoyed a drink in celebration of their elder daughter’s birthday. 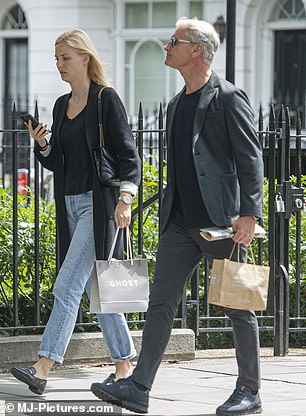 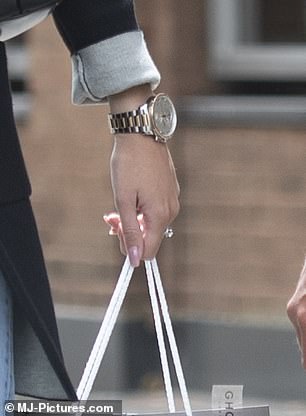 The retired Scottish racing star, 51, has sparked engagement rumours after his girlfriend, Sigrid Silversand, was spotted wearing a huge sparkler on her ring finger

‘Celebrating Lexi’s 16th birthday with her godfather, David Coulthard, and his girlfriend, Sigrid, and my lub,’ she wrote on Instagram. Coulthard was best man at Hughes’s wedding to the Britain’s Got Talent judge.

The former sportsman-turned-commentator had not been pictured wearing his wedding ring since January last year.

At the time, Coulthard described the birth as ‘the start of a fantastic period’ in his life and said ‘winning 13 races seems completely insignificant in comparison’.

He also once hailed his wife a ‘fantastic kisser’, joking: ‘I did research to confirm she’s the best’.

Silversand does not post often about her private life online, but has previously spoken openly about being single.

In 2017, she shared a snap of her modelling wedding gowns and wrote: ‘Just because you are single af [as f***] does not mean you can’t have a s*** ton of fake weddings.’

Coulthard was previously engaged to American model Heidi Wichlinski and had a relationship with Brazilian model Simone Abdelnour.

A spokesman for Coulthard was keen to play down talk of an engagement.

Once fashion’s enfant terrible, Jean Paul Gaultier is now 70, but confident that he’s improving with age — like a pair of well-worn jeans. ‘When denim gets older, it gets even better,’ he tells me at the press night of his Jean Paul Gaultier Fashion Freak Show at the Roundhouse in Camden, North London. The French designer adds: ‘So it has to be the same with us. The more wear and the older we get, the better it is.’

Ed Sheeran, who had a hit with a song called I See Fire, is desperate to avoid a blaze at his sprawling £3.7 million Suffolk estate.

I hear the pop superstar has won permission to install a hi-tech lightning conductor to protect the new chapel that’s being constructed at his home near Framlingham.

Planners at East Suffolk Council gave the mast the go-ahead after there were no objections from neighbours. The rod, protruding 7ft above the chapel’s tower, will attract any lightning bolts in the immediate area and safely dissipate the 300 million volt electrical charge.

His new boat-shaped chapel will also boast a spiral staircase and even a burial crypt where he can ‘retreat for contemplation, prayer and relaxation’.

It is being built on the eastern side of the estate — dubbed Sheeranville — because ‘the rising of the sun is relevant both in the Abrahamic and oriental traditions’.

Binky’s wedding woe as mum can’t be there

Binky Felstead has a helping hand from fellow Made In Chelsea star Rosie Fortescue as she prepares for her second wedding to businessman Max Darnton in Corfu.

But the celebrations will be tinged with sadness, as I hear the socialite’s mother, Jane, cannot attend after contracting shingles. Jane, who suffers from multiple sclerosis, reveals: ‘I’m not going to be well enough to go. For all the ups and downs life throws at us, this is one of the worst things I have had to deal with.’ 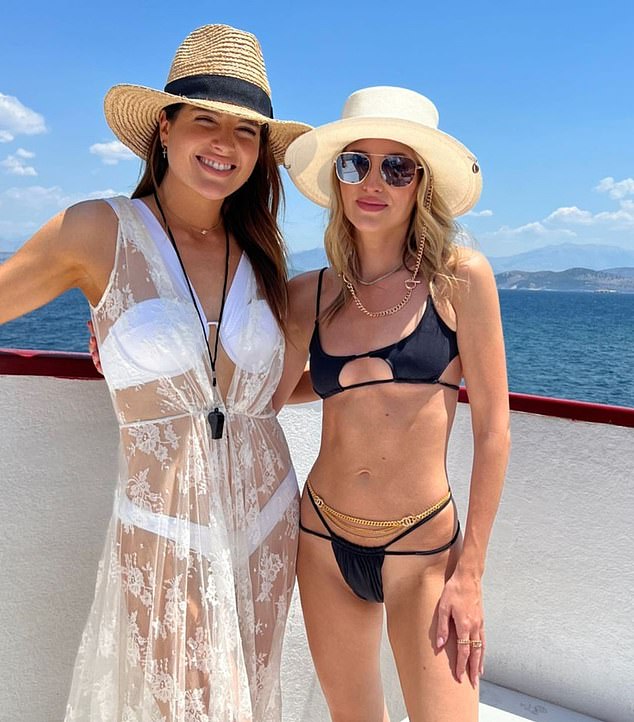 In the sun: Binky, left, and Rosie

It’s the latest blow for Binky, 32, whose one-year-old son Wolfie was rushed to hospital recently after a severe allergic reaction to hummus.

The Queen still enjoys a glass of wine with her dinner, and this week she honoured her Head Sommelier. I hear she presented Robert Large with the insignia of an honorary member of the Royal Victorian Order at Windsor Castle on Sunday. He was Yeoman of the Royal Cellars as well as her top wine waiter.

Last autumn, another royal sommelier, Demetri Walters, denied reports that the monarch had given up alcohol completely. ‘I choose for the Queen, but she’s quite exacting, as she doesn’t drink much wine at the moment,’ he told me. ‘It’s bad for her joints.’

Explorer Sir Ranulph Fiennes has revealed that Prince Charles, who is patron of his expeditions, ticked him off about the dangerous risks he takes. ‘I remember him saying: “I gather that you are so worried about beating the Norwegians to the next world record that you’re going too quick, and you might run into risks because of that.” I got back to him, saying: “Your Royal Highness, I understand from the news that you nearly fell off your horse playing polo and we suggest also that our patron doesn’t take too many risks.” ’ 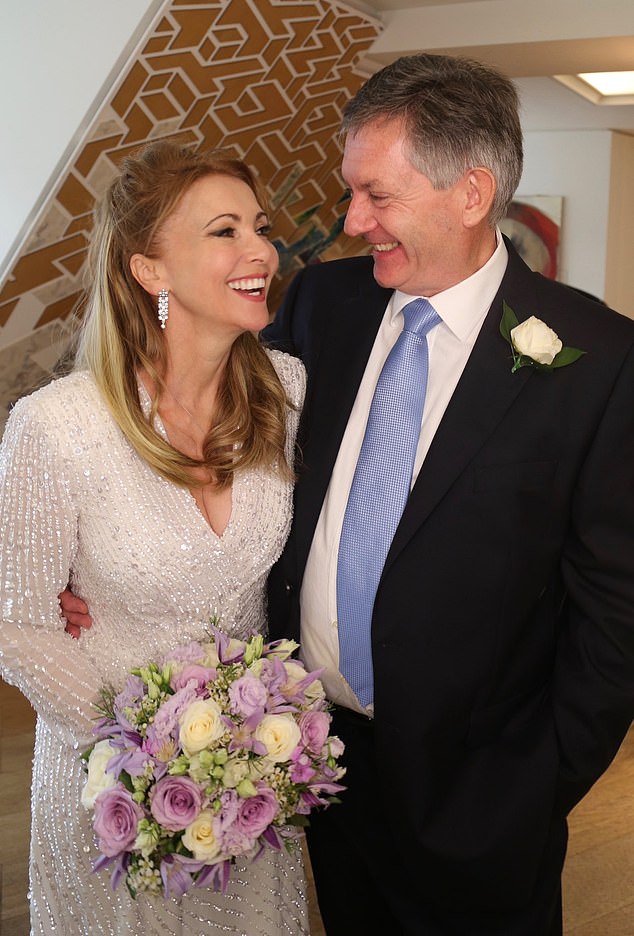 Since she married former BBC news anchor Simon McCoy last autumn, 1980s pin-up Emma Samms has discovered she’s not the only subject of his affections

Since she married former BBC news anchor Simon McCoy last autumn, 1980s pin-up Emma Samms has discovered she’s not the only subject of his affections.

McCoy, 60, best known for his waggish quips when reporting on the lives of the Royal Family, is also in love with the lawnmower he rides in the garden of their Cotswolds home — so much so he’s given it a pet name.

Samms, 61, says: ‘It not only has a name . . . but when it had to be taken in to be repaired, I noticed Simon had written “Tarquin to hospital” in our joint diary.’