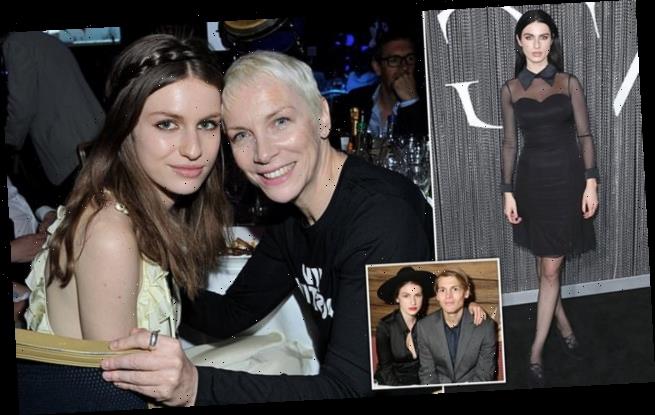 Eurythmics singer Annie Lennox’s daughter Tali spoke movingly of how her heart was ‘shattered’ after her boyfriend, Ian Jones, was killed when their kayak capsized six years ago.

Now I can reveal that Burberry model Tali has found love again at last, after moving to New York from London’s Notting Hill.

She’s fallen for well-connected property whizz Jeremy Aidan, 32, after they were introduced by mutual friends. 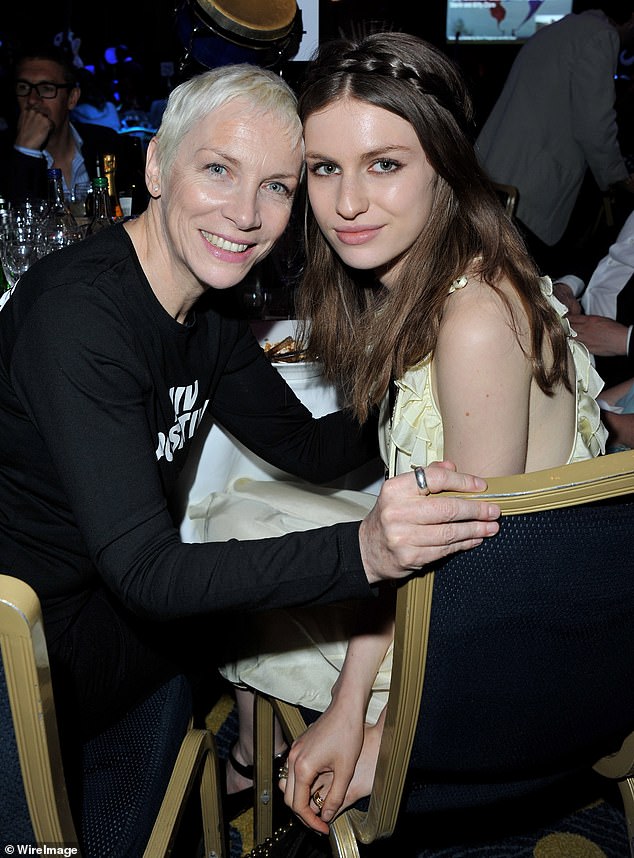 Eurythmics singer Annie Lennox’s daughter Tali said her heart was ‘shattered’ after her boyfriend, Ian Jones, was killed when their kayak capsized six years ago 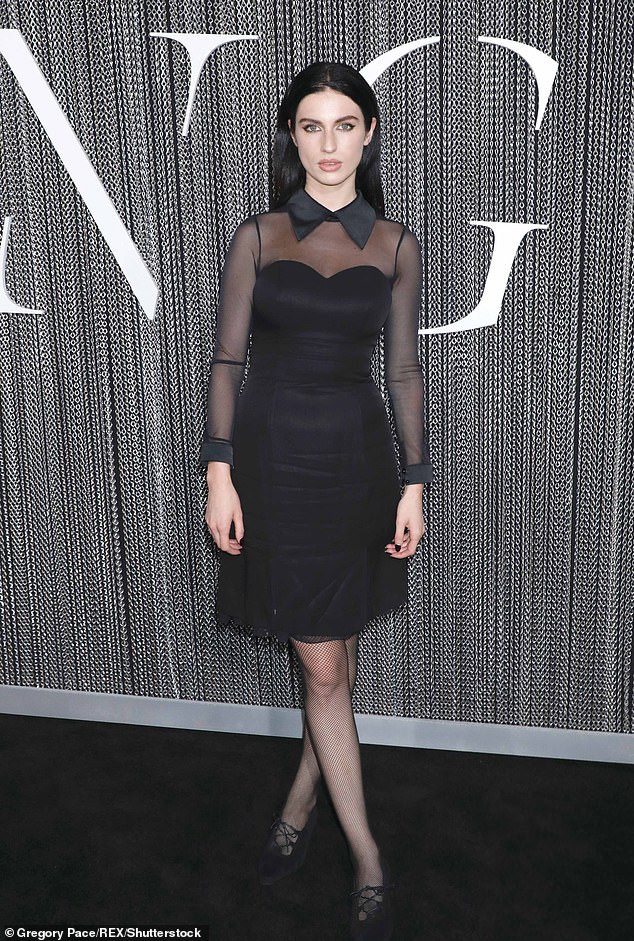 ‘They’re a really sweet couple,’ a pal tells me. ‘It’s great to see how happy he makes her.’

Aidan was born and raised in New York, where his regular appearances on the social scene are covered by society magazines.

He has been boasting to friends about ‘gorgeous’ Tali, 28, while she’s affectionately taken to calling him ‘Mowgli’ because of his shaggy black hair.

For her birthday last month, they enjoyed a romantic getaway to Miami.

The daughter of Israeli record producer Uri Fruchtmann, Tali was struck by tragedy in 2015, when photographer Jones drowned at the age of 32.

The couple’s kayak had capsized on the Hudson River in New York state, where his family lived, and he was swept away by the powerful current.

Tali was rescued by a nearby boat; his body was discovered three days later.

‘My heart is shattered,’ she wrote at the time. ‘My best friend, my soulmate, my partner in crime and creativity, the love and light of my life is no longer with me.’ 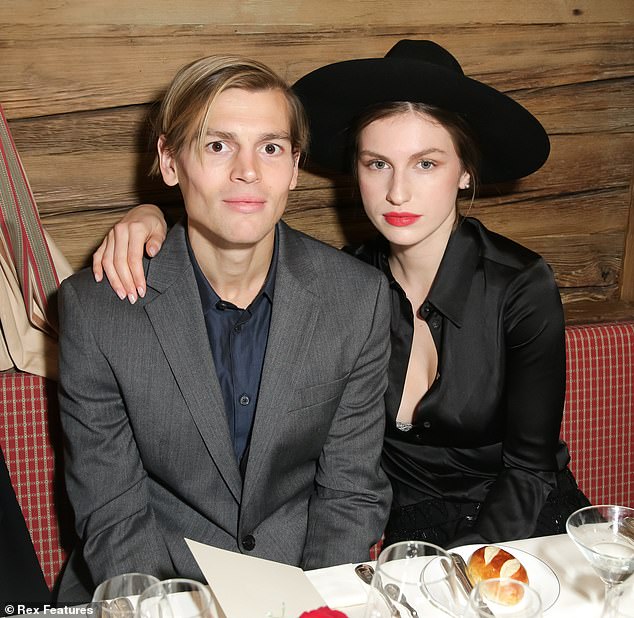 Settling in New York, Tali found solace in creativity. ‘Art helped me heal so much. I don’t know how I would have coped without that,’ she explained.

‘I like forms of healing that come from within. You don’t have to go to a therapist [or] lean on someone’s shoulder. You have a kind of sacred space from yourself.’

Her daughter was a bridesmaid at Harry and Meghan Markle’s wedding, and now Lady Zoe Warren finds herself playing another key role in the Prince’s circle.

The 37-year-old wife of Princess Diana’s godson Jake Warren has been helping chums keep calm during lockdown by giving them yoga lessons online.

Zoe doesn’t say if the Prince and Meghan attend classes, but they do start each morning at their £11 million Californian mansion perfecting their downward dogs.

‘I began yoga purely for the physical practice, which I loved,’ says Zoe, the Earl of Galloway’s daughter, who has three children, including Zalie, five, who was a royal bridesmaid in 2018. 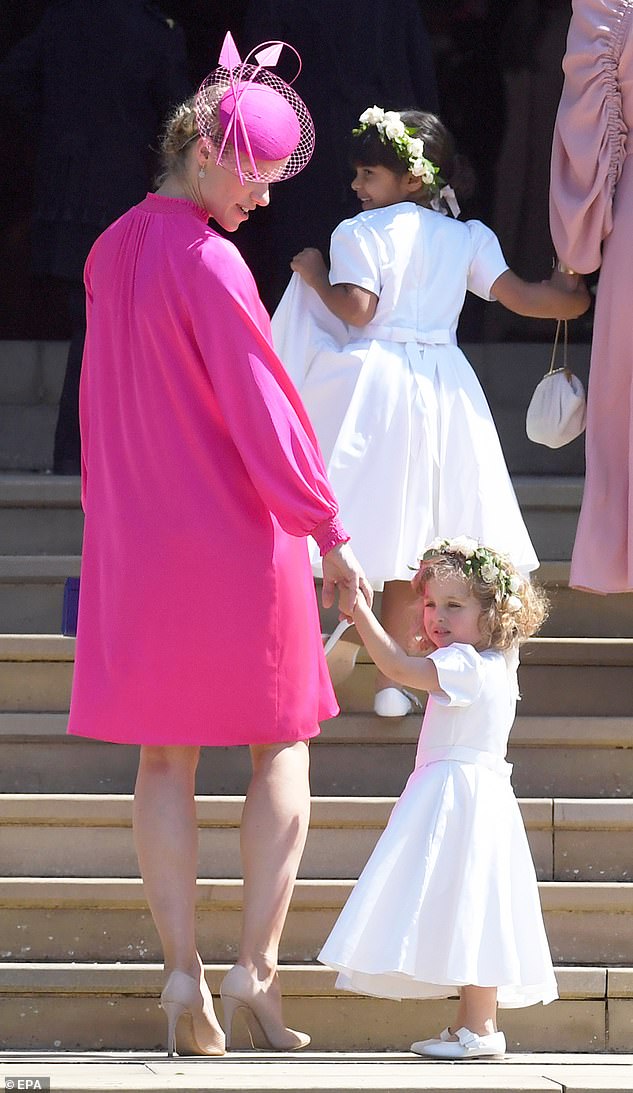 ‘I began yoga purely for the physical practice, which I loved,’ says Zoe, the Earl of Galloway’s daughter, who has three children, including Zalie, five, who was a royal bridesmaid in 2018

‘Over time I began to see the treasure trove that conscious movement, breath and stillness could offer. I hope my online offerings help to navigate the ups and downs of life.’

Anything that helps Harry calm down must be a good thing.

Not only has the Duchess of Cornwall spent the past week comforting Prince Charles after Harry and Meghan’s hurtful comments to Oprah Winfrey, she’s had to cope with some devastating news of her own.

I hear her best friend, Carolyn Benson, died on the same day as the Oprah interview aired. 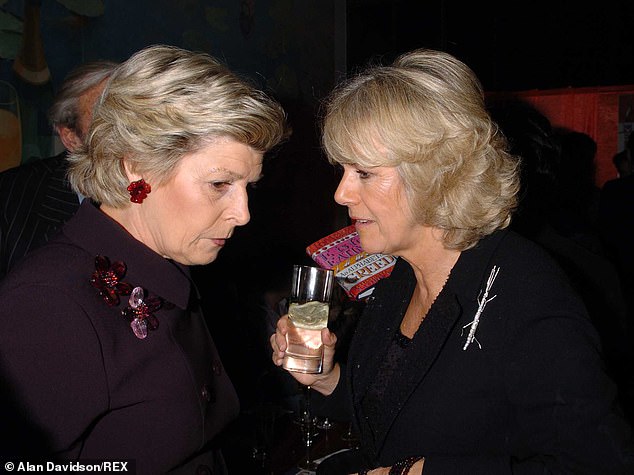 Affectionately called ‘Chubby’, she was 73 and had known the Duchess since they were schoolmates at the now defunct ladies’ academy in Southover Manor, East Sussex.

Camilla tells me: ‘Chubby was a life enhancer and dear friend who I, like many others, will miss enormously.’

Her late husband was Old Etonian racing figure Charles Benson, and Saturday dinners at their London home, a stone’s throw from Harrods, were described as probably the greatest sporting ‘salon’ ever assembled. There one might meet sporting legends such as cricketer Allan Border, Ilie Nastase or Jackie Stewart, alongside Albert Finney, Diana Rigg, or Bryan Ferry.

Carolyn’s mother, Jean Gerard Leigh, was the woman whose photograph was used to help trick the Germans into falling for one of the greatest deceptions of World War II, Operation Mincemeat, which inspired the classic film The Man Who Never Was.

Hailed as a Chelsea ‘icon’, property heiress Philippa Cadogan is known for giving pals tips on how to succeed in romance, including the edict that a first date should never last more than two hours.

Well, it seems that her advice has paid off, for I hear that Viscount Chelsea’s 28-year-old daughter is now engaged to a dashing Swede, Christian von Celsing, 28. 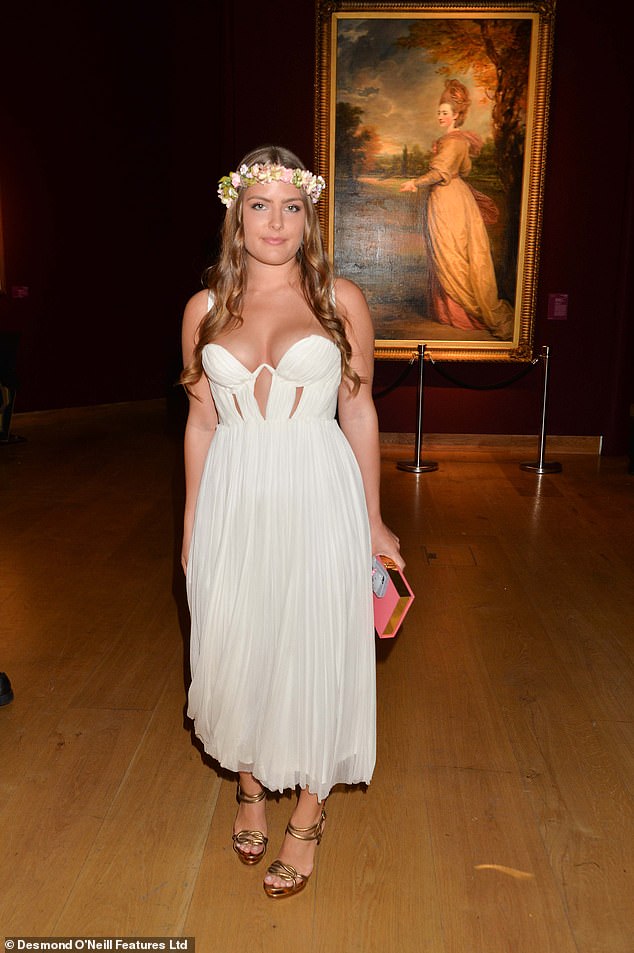 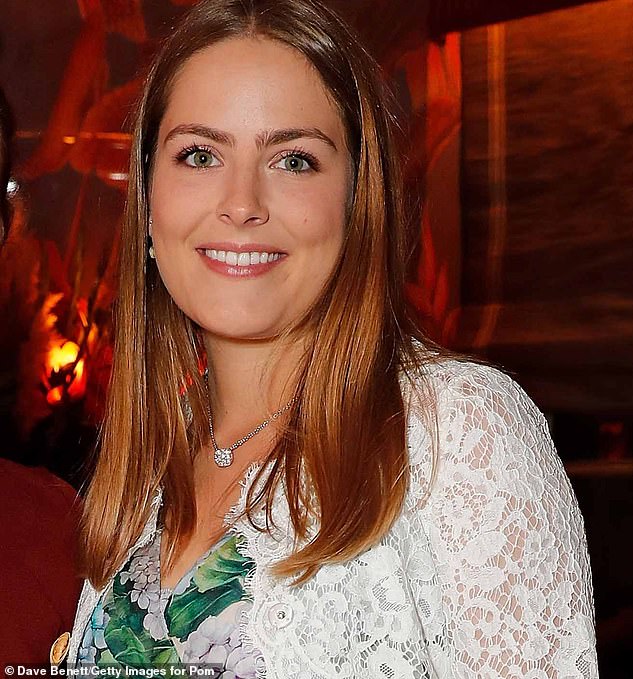 Philippa is an interior designer whose grandfather, Earl Cadogan, owns much of Chelsea and has a £6.8 billion fortune

Lord Chelsea tells me: ‘The Cadogan family are delighted and look forward to welcoming Christian into the family.’

Philippa is an interior designer whose grandfather, Earl Cadogan, owns much of Chelsea and has a £6.8 billion fortune.

Her former flatmate, Tatler editor Richard Dennen, has described her as an ‘icon of the Royal Borough’ of Kensington and Chelsea, adding: ‘She’s like the Queen and knows everything.’

How to avoid a tedious lockdown was a two-pipe problem, and Sherlock star Benedict Cumberbatch found an ingenious solution. 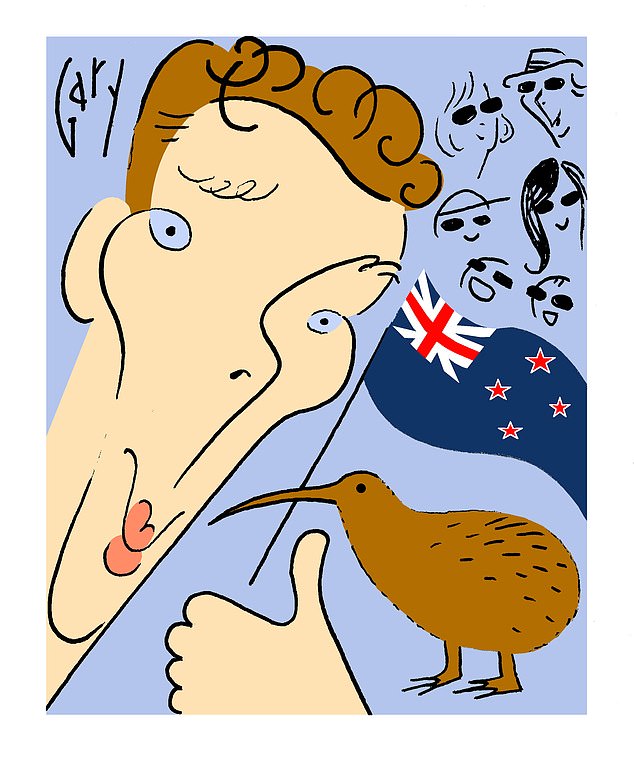 Benedict Cumberbatch 44, has been filming in New Zealand and brought over not just his theatre director wife, Sophie Hunter, and their three sons, but his elderly parents, too

The actor, 44, has been filming in New Zealand and brought over not just his theatre director wife, Sophie Hunter, and their three sons, but his elderly parents, too.

‘We were so blessed to be there [when the pandemic struck],’ he says. ‘It was too late by then to risk going back home. I had both my parents with me, who are in their 80s and my dad is severely asthmatic… and my three boys and my wife, a very merry band of us.’

Now back in London, Cumberbatch adds: ‘We couldn’t have landed in a more fortunate situation; we were so lucky and I just held them close to me.’

Tony Blair has a rival when it comes to making a fortune — his wife, Cherie.

I can disclose that business is booming at her legal firm, Omnia Strategy, with newly published accounts revealing a £1.9 million increase in total members’ interests over the past year.

The firm, which was set up in 2011, specialises in ‘bespoke dispute resolution’. Pop star James Blunt’s aristocratic wife, Sofia, is a director.

‘I just think there’s something about the way she dresses which says, ‘I just threw this together — I don’t care what I look like but I still look amazing’,’ explains Baroness Warsi.

Speaking on the My Wardrobe Malfunction podcast, she adds: ‘If I had the body for it, and the confidence, I’d dress like Michael Portillo.

I would love to be able to wear a really bright, shocking pink dress, or a bright yellow dress with a big bow in my hair.’

Are you ever too old to wear a bikini? Broadcaster Emma Forbes declares she won’t ever wear a two-piece again, at the age of 55.

‘I’ve got to that point where I’m not doing bikinis any more,’ she says. ‘I’m all about the one-piece because I’ve got a beautiful 24-year-old daughter and I’m like, ‘You need to rock that bikini’.

There has to be a moment when you can’t wear a bikini.’ 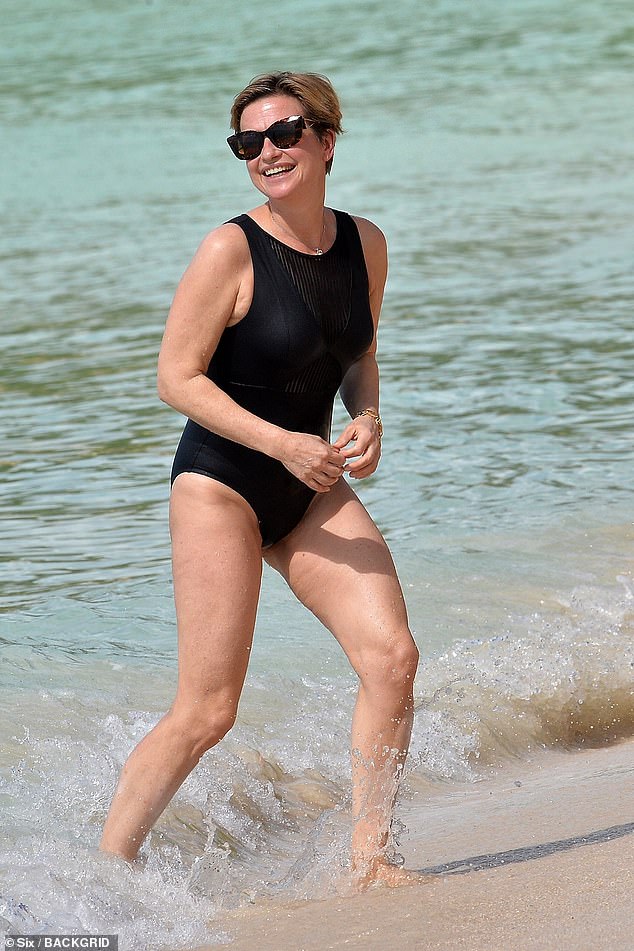 Broadcaster Emma Forbes declares she won’t ever wear a two-piece again, at the age of 55

Emma, daughter of The Stepford Wives director Bryan Forbes and actress Nanette Newman, adds: ‘It’s all about confidence. I’ve seen people in all shapes and sizes, and sometimes you look at somebody in a bikini and you think, ‘Oh my God, they’re just rocking that’, because their confidence exudes with it. I’m now somebody who — it’s just too much, if I’m totally honest, I just don’t have the energy any more to suck in my abs when I’m wearing one.’

The pandemic has spelled doom for some relationships, but I hear Tory Sir Geoffrey Clifton-Brown took the precaution of quietly getting married before lockdown.

The Cotswolds MP, who turns 68 this month, exchanged vows with Kym Erlich, a fun-loving actress-turned-estate agent 21 years his junior.

The new Lady Clifton-Brown is now chatelaine of a 17th-century manor house near Cirencester, so she can cock a snook at ex-boyfriends including former MP and spy writer Rupert Allason, banking scion Alex Hoare and journalist William Cash.

Sir Geoffrey was thrown out of his party’s conference in Manchester in 2019 over a verbal clash with security staff.