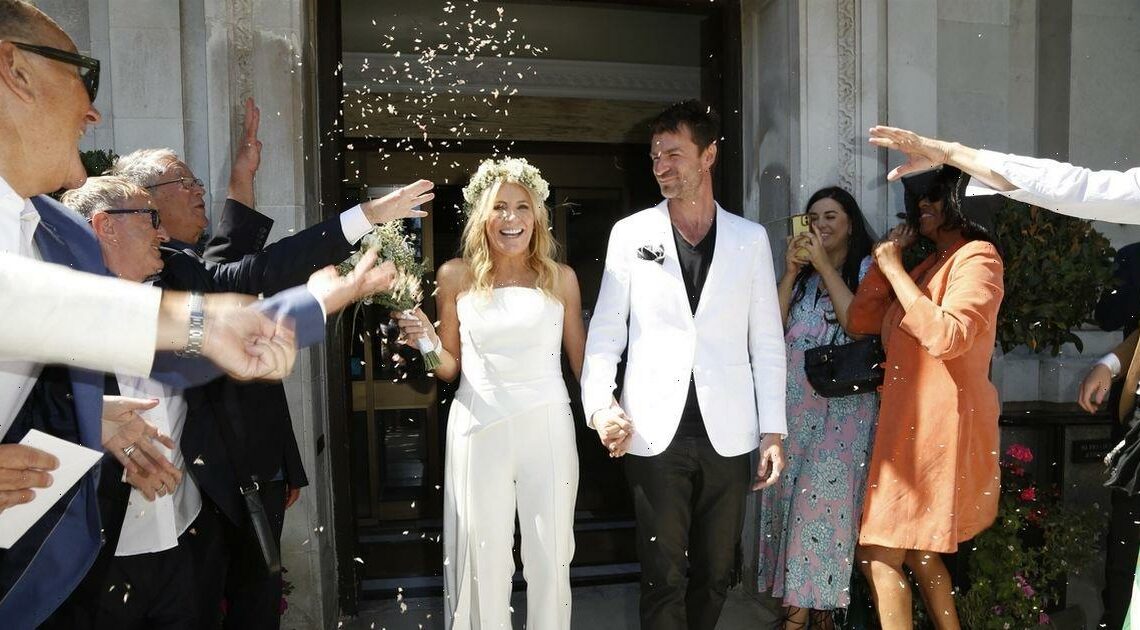 Michelle Collins has married her fiancé Mike Davidson after 10 years of dating.

The former EastEnders actress, 60, who portrayed Cindy Beale in the hit BBC One soap from 1988 until 1998, and 38 year old Mike tied the knot in a low-key ceremony in London on Wednesday 10 August.

The pair exchanged vows at Islington Town Hall surrounded by their nearest and dearest, including Michelle's former EastEnders co-star and on-screen husband Adam Woodyatt, 54, who is best known for playing Ian Beale.

Dad-of-two Adam, who is currently on a break from his role in the hit soap, cut a casual figure in a striped shirt and navy blue trousers, which he paired with black trainers and a crossbody bag.

He could be seen watching as the bride and groom made their way out of the venue together and were showered with confetti by their guests.

Mum-of-one Michelle kept things simple in a classy white jumpsuit which she paired with a delicate flower crown, and she wore her blonde hair in loose curls.

Meanwhile, her new husband Mike opted for black trousers and a white suit jacket along with a plain black t-shirt for the ceremony.

The couple have been dating for over 10 years after being set up by Michelle's niece in 2012, and they announced their engagement back in April, with Mike popping the question at Temescal Canyon.

The following month Michelle appeared on Loose Women and opened up about her romance with Mike, who is 22 years her junior, and revealed that “wasn’t on her agenda” to get married originally.

Asked by the panel what it was that made the pair take the plunge, she replied: “We survived the pandemic together – it actually brought us closer together.”

Michelle also opened up about her struggles the last few years alongside Covid – her mum and her best friend died in the same year. She said: “It’s actually been a really challenging time, and I just think we should do it, why wait you know? And you have to live life from day to day now.”

Giving an insight into her and Mike's wedding plans, she revealed that her pals from across the globe were jetting to the UK for the event, with many flying over from places such as Australia and Italy.

A few days prior to their nuptials, The Sun reported that the former soap star had told her friends: “We know it’s late notice, but we’ve been together for ten years and what’s the point in waiting.

"We thought life is too short and we want to see all of our friends and celebrate.”