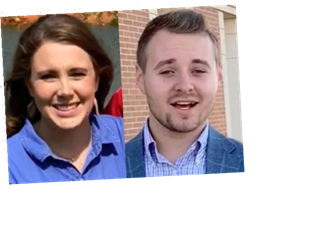 So far, the Duggar response to reports of a Homeland Security raid on their property has been to play word games and deny all knowledge.

Fans obviously have a lot fo questions, but the Duggar family is actively silencing commenters — even fans — who are seeking answers.

Just a few days ago, there were rumors that the Federal Bureau of Investigation had conducted a raid on one of the Duggar family homes.

Initially, it was only a rumor, one that appeared to be debunked when the FBI reportedly denied doing anything of the sort.

This week, Homeland Security confirmed their presence in the Duggars’ hometown, and agents were reported appearing to investigate Josh, his business, or both.

But even before Homeland Security came forward, the Duggar family was already taking measures to preemptively silence unwanted questions.

As the sharp-eyed folks at In Touch Weekly noticed and first screenshotted, Anna Duggar limited comments on her Instagram.

This means that she tailored permitted comments, either to those who follow her or to those whom she follows back (in this case, the former).

Though Anna has many followers, this is a way of tuning out anyone who would come to her page to ask about her sexual predator husband.

And she is not the only member of her family who simply does not want to hear from anyone who isn’t a devoted sycophant.

On the surface, it seems deeply odd and unwise for Jed Duggar to follow Anna’s example in limiting replies.

While we’re sure that he’s been getting trolled for weeks, he’s running for public office.

If one particular person says awful things to you, you might block them — though that may be illegal once you’re elected.

But for a politician to limit replies from potential voters makes them look thin-skinned, weak, and uninterested in voter opinions.

At the same time, perhaps Jed dialed down the number of people who could comment on his posts for a very practical reason.

If a constituent signs in to social media to check out a candidate, what if they saw comments pointing to a huge scandal?

Maybe Jed thought that the investigation could remain a secret. Clearly, that was not the case.

After they realized that this story could not be buried like Josh’s sex crimes against his sisters were, Michelle and Jim Bob put out a statement.

“We were shocked to see a news report state today that our home was raided by federal law enforcement agencies,” the statement began.

“To the best of our knowledge,” they claimed, “it’s also not true that any member of our family is the target of any investigation of any kind.”

Though this statement was released before certain details of the apparent investigation, many find it hard to believe that they know nothing.

“Living a life in the public’s eye has taught us that it is best not to reply to every rumor and piece of ‘fake news’ that is circulated online,” they wrote.

Oh, we just knew that they were going to play the fake news card.

“It would be a full-time job if we attempted to do so,” the Duggars complained.

“However, because of tonight’s media coverage, we thought it is important to address this rumor with you,” they explained.

The statement concluded: “Thank you for the love and support that we can always count on in you our fans and friends.”

In the mean time, fans remain curious as to what sorts of crimes Josh has allegedly committed — this time.

A lot of financial crimes can be committed by someone running a business, but that would not explain these particular feds being involved.

We could speculate wildly, but truth be told, we’d rather know the actual crimes and see Josh face justice for once in his miserable life.