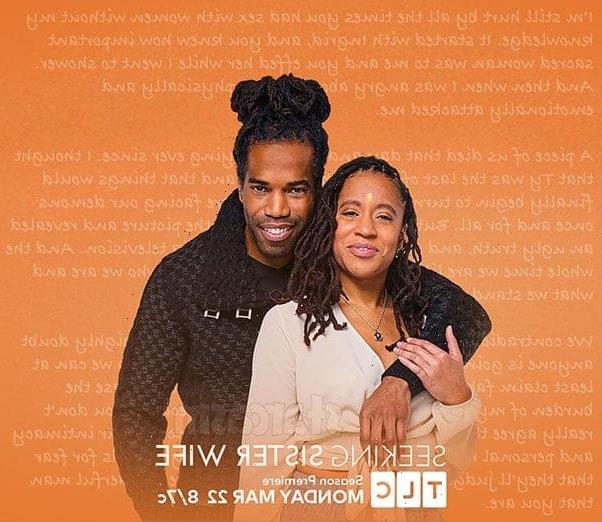 Amid a Seeking Sister Wife scandal.

According to TMZ, lead star Dimitri Snowden has filed to divorce his third wife, Christeline Peterson, submitting the necessary legal paperwork in Los Angeles on Tuesday.

Thankfully, the estranged couple do not have any kids together.

But they do have a questionable recent history.

Upon seeking a restraining order against her spouse, Peterson claimed Snowden had been physically abusive during their relationship over the past 12 months or so.

She added that she fears for the safety of her two daughters from a previous relationship.

In her filing, Christeline alleged that, back in January, she was woken up one day with a violent attack.

She said that she was awoken by Snowden “slamming my head into the headboard of the bed and he was yelling at me.”

This, sadly, was not her only example of abuse, either.

Petersen also told authorities that Dimitri was abusive during intercourse.

On record, she claimed last month, “he choked me during sex, even though I told him not to,” adding:

“The more I struggled the more he enjoyed it.”

If true, of course.

Christeline says she felt as if she had no choice but to go along with everything, explaining:

“I stopped saying no after a few times, because any struggle by me would prolong the sex and choking.”

The reality star added that she often felt on the verge of passing out after these incidents, and that she suffered bruises, scratches and redness around her neck from the alleged attack by Dimitri Snowden.

A judge granted her restraining order request at the time, but police said they lacked the evidence to pursue charges.

Seeking Sister Wife centers around Dimitri and Ashley and their journey to add another spouse to their household.

Ariadne Joseph was one of the women brought in previously for, essentially, a try-out.

As you can see below, she has also claimed to be a victim of abuse, seemingly at the hands of both Dimitri and Ashley — along with the general unusual nature of their relationship.

“These people abused me and traumatized me and my children,” Ariande said in a recent interview.

Saying she was “triggered” by Peterson’s account (as detailed above), Ari alleges that she was “violated” by Snowden in bed on at least one occasion.

“I could not get free because he had the back of my neck,” she said as part of this interview.

Really frightening all around.

As far as we know, the network still employs Dimitri Snowden and has every intention of airing future Seeking Sister Wife episodes.

At some point, perhaps it can be held accountable for continually giving a platform to allegedly abusive and very clearly misogynistic human beings.

The ‘This Is Us’ Season 5, Episode 15 Promo Hints Kevin May Get Cold Feet
World News