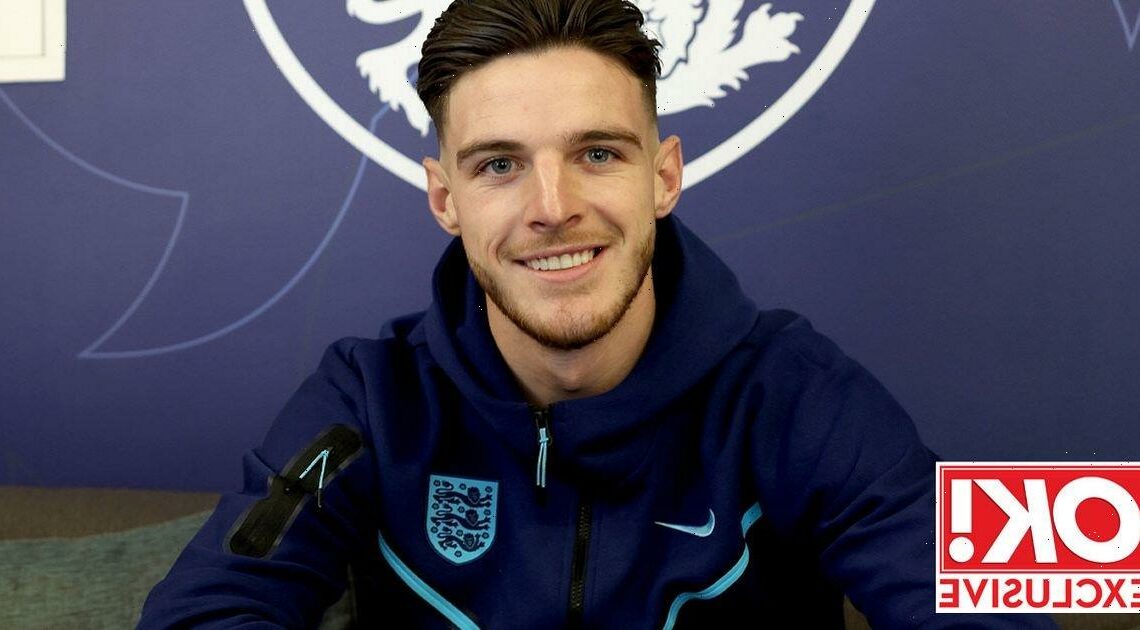 England’s Lionesses inspired people up and down the country with their historic Euros win this summer.

And no one was more encouraged by their triumph than the men’s team, who will be hoping to bring home another trophy at the World Cup, which has just kicked off in Qatar.

“We were definitely inspired,” says midfielder Declan Rice. “It was a real historic moment and they fully deserved it.”

And the West Ham player is confident he and his team can win the 2022 World Cup and bring an end to the famous 56 years of hurt.

“Oh, 100% we can win,” says Declan, 23, who was left “gutted” after England were beaten by Italy in the final of the 2020 Euros. “We have a great squad of experienced and younger players.

We’ll give it our best go and that’s all we can ask for.”

Away from the football pitch, life has been extra busy for Declan after he and his long-term partner, Lauren Fryer, welcomed their son, Jude, into the world in August. And while questions about Jude and fatherhood are off limits, Declan does tell us how grateful he is for our congratulations. “Thank you, I really appreciate it,” he smiles over Zoom.

Here, Declan opens up about hanging out with the Lionesses and watching Love Island, the pressure of being in the public eye and his thoughts about that all-important World Cup…

Hi, Declan! Were the England men’s team excited to see the Lionesses win the Euros this summer?

Definitely. We spent a lot of time with them in camp in June, so we saw them every day. They’re just really top girls and to see them win it at the end was amazing. I think from the quarter finals they just looked too strong and from there I thought they’d win it. It was a real historic moment and they fully deserved it. They deserve everything they get.

Do you know any of the women well?

Yeah, we got close to quite a few of them. Beth Mead is a legend – she’s really talkative and funny. And Ella Toone and the captain Leah Williamson are great. We ended up just watching Love Island and chilling and talking about football and the Euros.

Are you a big Love Island fan?

No. I’ll watch it, but I don’t take an interest in it. Some people get really into reality TV, but I could never see myself phoning in or voting!

Fair enough! So how are you feeling about the World Cup?

I’ve been looking forward to it. It’s going to be my first World Cup, hopefully. It’s an honour to be selected. Watching it as a kid, you dream of going to a World Cup – it’s the biggest tournament you can play in.

Yeah, of course we can – 100%. We’ve got a great mix and a great manager who understands the players. We’ll give it our best go and that’s all we can ask for.

What did you learn from your experience at the Euros?

Just how together you need to be during a tournament and how everyone needs to be on the same page. As a squad of players going to a World Cup, you might only play for a few minutes or not at all, but you need to be there for the team. To win a tournament you need to have a good team spirit and that’s what we need for the World Cup. The Euros was over a year ago now, so we’ve moved on from that and now we’re looking forward to the World Cup and feeling positive about it.

Before the Euros final, you said you’d drink your first ever pint if England won. Will you have one if England win the World Cup?

Well, I actually haven’t had a pint, but I did try a beer after the Euros. I tried it, but I didn’t like it. The taste and smell of it are not for me. I’ve seen my dad after a few pints… I don’t want to get like him!

Who are your biggest supporters off the pitch?

How do you like to switch off when you’re not playing?

I like to go out and be free. I like to go into London and I like to play golf, basically things that take my mind off football. It’s nice to get away from the pitch and be normal sometimes. I’m quite chilled. Even though I’m a footballer, I’m still a normal person and I like to do normal things and be myself. I just like to be with my friends and have fun really.

Do you get recognised a lot, or can you go under the radar?

Not any more. I get stopped all the time now. It’s tough, because sometimes you feel like you’re constantly being watched, but that’s part and parcel of our job and you just have to get on with it. And of course you get to meet nice people and hear some nice stories.

Can you tell us about teaming up with EE for the Connected Club Cup?

I love gaming and when the opportunity came up to be a part of it, I said yes straight away. I think it’s really good to put my name on it. I like to interact and have a laugh with other people and it’s a nice way to connect with the fans, have a conversation with them and play FIFA. It’s good to spend some hours and give our time back to the people who support us.

Airbnb adds new categories – including 'top of the world' homes