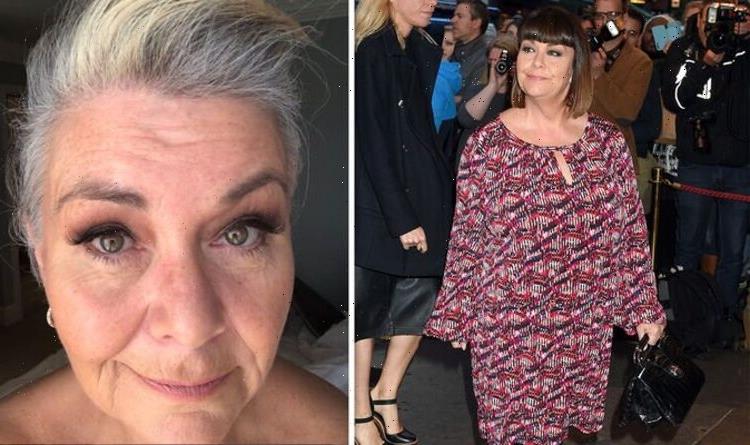 Comedian Dawn French has opened up about the brain tumour scare she experienced whilst battling vertigo in 2014. During her stand-up tour, Dawn’s condition was so bad it left her feeling like her head was “collapsing inwards”.

The French and Saunders star, 64, was diagnosed with vertigo back in 2014 whilst she was busy performing her 30 Million Minutes tour.

Dawn even had to take a walking stick with her on stage as she became afraid of falling over.

Speaking on Michelle Visage’s Rule Breakers podcast, Dawn admitted that the condition left her terrified as she couldn’t understand “what is up and what is down”.

She explained: “It is like my skull is a room and the whole of the top is collapsing inwards, and everything starts spinning.

“It’s like being very drunk and not understanding what is up and what is down.

“And for a while they thought I might have a brain tumour,” Dawn revealed.

The comedian went on to detail how the neurologist had told her the condition was triggered by the side-lighting on stage, explaining that she had nothing to “latch” her eyes onto due to the darkness where the audience were sat.

Dawn also admitted that performing on a raked stage sloping downwards towards the audience made her feel that she wasn’t “upright”, which only made things worse.

She added: “I took a stick on stage with me and I would make my two legs very wide on stage and I would put the stick in front of me like a tripod so that I had something to stand up to.

“It was like being on a buffeting boat or something. It was awful, absolutely awful.”

Dawn went on to admit that she would tell her crew they would have to “drag her off stage” if she fell over.

The star was given Beta blockers at the time to calm her fears of falling off stage.

‘Can’t wait!’ The Repair Shop’s Will Kirk teases move away from show [INSIGHT]

She also revealed that her vertigo disappeared three weeks after finishing the tour, suggesting that the pressures of performing in that environment had exacerbated her condition.

However, Dawn is due to return to stand-up in September and fears that the vertigo might return.

Ahead of her new tour Dawn French is a Huge T**t, she said: “I have a slight fear that that [vertigo] might come back.

The Vicar of Dibley star had described her new show as a collection of “buttock-clenching embarrassing stories”.

Whilst promoting the tour, she explained: “This show is so named because unfortunately, it’s horribly accurate.

“There have been far too many times I have made stupid mistakes or misunderstood something vital or jumped the gun in a spectacular display of t**ttery.

“Roll up! Book early to see the telly vicar lady be a total tw*t on stage, live in front of your very eyes. And ears.”

Paramount Announces 'Yellowstone' Is the Top TV Franchise of 2021