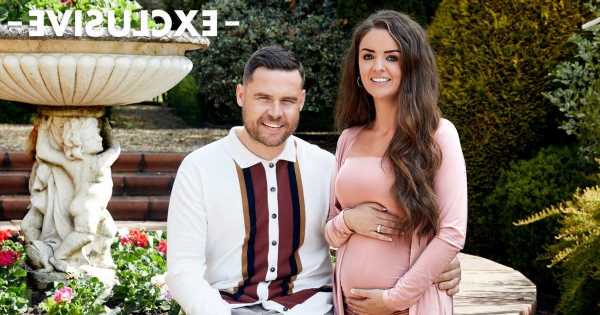 Danny Miller has exclusively revealed to OK! that he is set to marry his childhood sweetheart, Steph Jones, after asking her to marry him during a romantic trip to St Lucia.

As if being engaged wasn't exciting enough, the happy couple have also revealed they are expecting their first child.

The 30-year-old Emmerdale actor, who plays Aaron Dingle in the hit soap, and Steph have celebrated their joyous news with a stunning OK! shoot.

Danny has also dished all the details on his beautiful proposal – admitting that nerves almost ruined the moment.

“I thought I was going to be sick because I was so nervous,” he laughed, during the exclusive OK! photoshoot with his 29-year-old midwife fiancée.

The actor went on to detail how he planned the proposal during the holiday, as it felt like the magical moment "was supposed to happen" in the dreamy location.

Danny explained: “Steph is 30 in October and I originally planned to do it then but it all just happened on the holiday that Steph booked for my 30th in St Lucia.

“We originally went into the jewellers there as I was buying myself a watch for my birthday, and then Steph was attracted to the rings.”

Steph added: “Danny said, 'Put them away now!' so I didn’t think it was going to happen. Danny told me it would be a while before he proposed at the beginning of the holiday to throw me off the scent.”

“Once I saw the look on her face when she spotted this specific ring and how beautiful it was, everything just slotted into place and I thought, “It’s obviously supposed to happen here,” continued Danny.

The evening after the trip to the jewellery store, the couple – who met during school but have been dating for two years – had a dinner reservation on the beach and Danny decided this was the ideal proposal location.

“We had a candlelit dinner booked on the beach for the second to last night, so that seemed like the perfect time,” he beamed.

But Danny’s nerves were so apparent that Steph thought he was unwell. She explained: “He was so nervous during the meal. I think he went to the toilet seven times. I said, 'Do you think you might have a urine infection?'.

"He was acting strange. Then I turned around and Danny was down on one knee. I was shaking. It didn’t feel real at first.”

As if that wasn't romantic enough, the background music changed to Adele’s hit When We Were Young just as he got down on one knee.

“As I got down on one knee, the music cut out, which I didn’t know if they’d done on purpose, but it was quite loud up until that point, and then Adele’s When We Were Young came on,” Danny explained. “As we met in primary school, it felt very fitting.”

“He was my first love,” gushed Steph. “We’ve said we’ll have to have it as our first dance song.”

Read Danny and Steph's full interview – and see all of the stunning pictures and engagement video! – here.

American Song Contest: Everything you need to know about the Eurovision spin-off