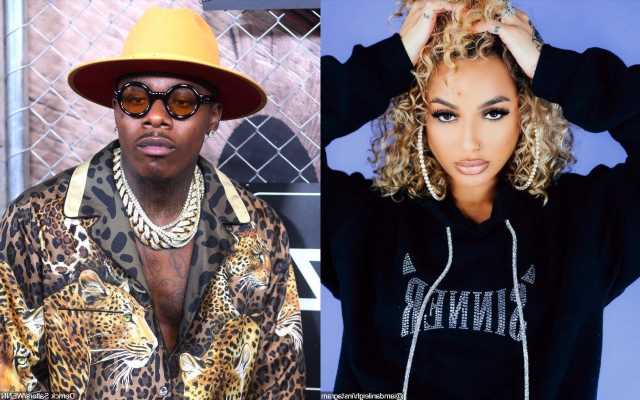 DaniLeigh Announces Pregnancy With DaBaby Speculated to Be the Father

In her pregnancy announcement, the 26-year-old ‘Yellow’ singer attaches stunning maternity photos which see her posing near the waterfall in the Dominican Republic.

AceShowbiz –DaniLeigh is about to me a mom! On Friday, July 16, the singer took to her Instagram account to share with her followers that she’s currently expecting her first child. In her pregnancy announcement, Dani attached stunning maternity photos which saw her posing near the waterfall.

The pictures, which were taken in the Dominican Republic, featured Dani donning nothing. She only had a white fabric covering the front part of her body while she was dripping wet. One picture, meanwhile, saw the “Yellow” singer posing seductively on the rock.

“As you grow so does my love, discipline, and focus,” so Dani wrote alongside the pictures. Upon the announcement, some celebrity friends sent congratulatory messages in the comment section. “congrats,” Queen Naija said. “congrats boo,” Ella Mai added, with Dream Doll writing, “Congratulation Dani.”

The announcement also made Dani trend on Twitter, though some fans were not surprised by the fact that she’s pregnant. “Dani Leigh can finally stop wearing them damn jackets. I know sis was burning up in them,” a fan said. “Dani Leigh announcing a pregnancy as if the public didn’t know already…,” someone noted. Echoing the sentiment, another user tweeted, “DaniLeigh we all knew u was pregnant since February.”

While Dani didn’t reveal the father of her unborn child, people believe that it’s her ex-boyfriend DaBaby. “NOT DANILEIGH BEING PREGNANT W DABABY’S CHILD CITY GIRLS DOWN BY A MILLION,” a fan wrote. “Dani Leigh is pregnant with Dababy child. Omg,” someone else reacted.

Rumors that Dani was pregnant first emerged in March, shortly after she broke up with rapper DaBaby. In a video that circulated online at the time, Dani was seen sporting what seemed to be baby bump.

The “Rockstar” rapper, meanwhile, has yet to comment on the speculations that he is the father of Dani’s baby. Should it be true, it will be the spitter’s third child. The rapper, whose real name is Jonathan Lyndale Kirk, fathers two children with the first being born in 2017 and the second being born in 2020.

Biz Markie, who rapped the classic song Just A Friend, dies at 57