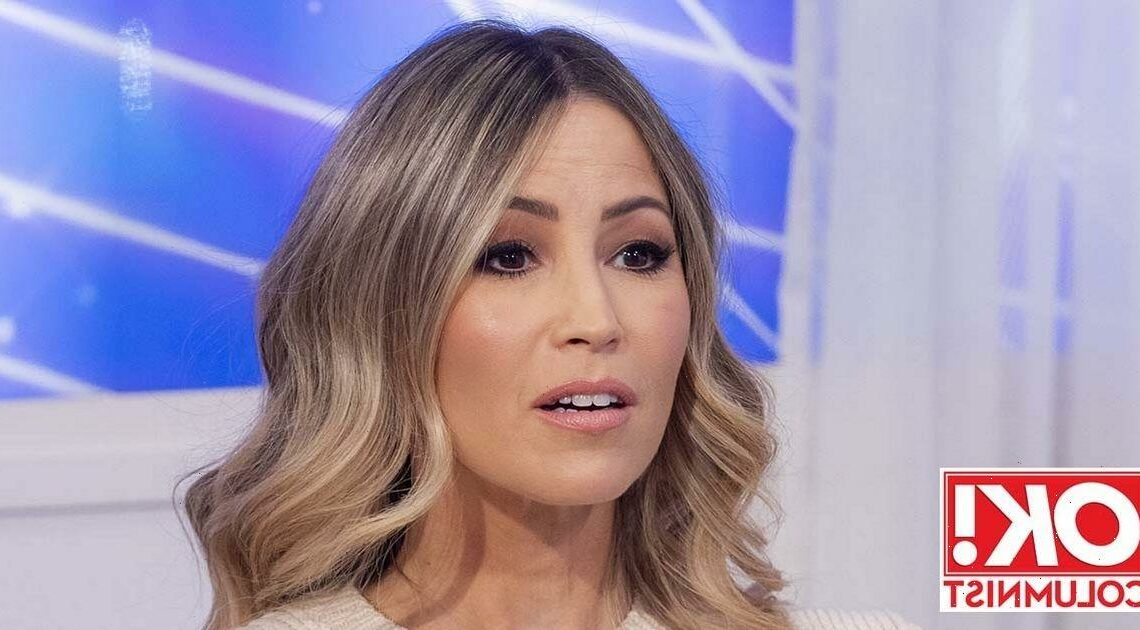 In yet another jam-packed and exciting Dancing On Ice, standards were undeniably high, with Brendan Cole scoring the first nine of the series, and Kimberly Wyatt bagging a series high-score of 34.

It was Movies Week, and while Bez amused audiences with his playful skating habits and crash helmet, and Sally Dynevor stunned in a brown wig, it was Ria Hebden who was the second celeb to be eliminated with skating partner Łukasz Różycki.

Dancing On Ice's Associate Creative Director Dan Whiston shared his "shock" in his OK! column that Rachel Stevens found herself in the bottom two with Ria in Sunday evening's show.

Dan also updated us on some icy accidents during rehearsals, which celebrities are getting competitive, and whether Kye will return next week after his knee injury.

We were shocked to see Rachel Stevens in the bottom two. She made her skating debut last night and there was a lot of pressure on her. She worked so hard this week, but she did sometimes get overwhelmed with us on the ice. She got it together though and pulled it together and I feel like she did a great routine. Now that she's got one under her belt I feel like the only way for Rachel now is up. She's got the confidence and she didn't have that last week or the week before when everyone else did. I think there are exciting things to come for Rachel.

Brendan definitely deserved a nine, and if anything we're now going to have to heighten the actual scores themselves! Brendan and Vanessa had a really nasty fall. Vanessa got her blade caught in her costume and they both fell over and it takes so much courage to put that behind you and go out and there and they ended up skating beautifully. The show is very, very high standard this year, much more so than it has been in the past, and the problem is, with the bar so high, everyone has to work extra hard to bring the results to make it even better. So there will be more rehearsals, practice and training because everyone's really pushing the boundaries. Hours have to be put in. Everyone is so dedicated and it gets to about half way through the show and you can see certain people literally sleeping in their dressing room to get the hours in. You see it turn and it's almost like the desire to get to the top three just takes over your life.

When I watch Sally skate she just melts my heart. She's so beautiful! After meeting her daughter I realised she looks so much like her with the wig on, I couldn't believe it! She looked so young, so amazing.

With Bez, we had to go safety first and give him a helmet again, but we just went with a slightly bigger than usual Indiana Jones hat to keep it inside! Everyone's talking about Bez, and I just love that. He's really entertaining and I think that's what everyone at home wants.

Backstage is crazy. There are so many people working backstage and they're running out on the ice, lampposts are pushed on, aerial hoops drop down and boulders roll on, people in zebra and lion costumes are waiting to come out! If people could see what I can see in the ad breaks you wouldn't believe it. Everyone runs around and people are shouting instructions at each other, and then suddenly it's 'hello, welcome back' and it's all so calm and smooth again. That's what makes the show magic. By the time I've finished, I am exhausted and my stress levels are through the roof.

WILL KYE BE BACK?

We're all hoping Kye will be back next week. Some of the things he's been doing on the ice are incredible – he had his BMX on the ice! Then often it can just be the smallest thing that does the biggest injury. His blade got caught and he fell on his knee in a very difficult position and caused injury to his knee. We have everything crossed that he'll be able to skate again next week.

The costume team and hair and make up do such amazing jobs. Liberty and Joe had to come out of their animal costumes and get a completely new look done for their skate-off look. All the hair and makeup had to be done again and in such short time too, it's so impressive. They skate off and go into a little booth which is the quick change area, and then there's a team of people that just strip people down and do their hair while someone else is doing their costume. It's such a quick turnaround and if the production team weren't as good as they are, there's no way the show would be at the calibre it's at.

For all your Dancing On Ice news, sign up to OK!'s daily newsletter here