Home » Celebrities » Curious About Gisele Bündchen’s Net Worth? Prepare Yourself 🤯

Curious About Gisele Bündchen’s Net Worth? Prepare Yourself 🤯

Gisele Bündchen is rich, rich, okay? Not only does she remain one of *the* most successful and influential models to this day, but she set the bar high for how to use one’s likeness to make serious $$$. And clearly her hard work has paid off, because after pretty extensive research, it appears that her bank account rightly reflects all that hustle. Let’s dive in, shall we?

‘Kay, so get this: Gisele walked in her first show as a Victoria’s Secret Angel in 2000 and worked with the brand for almost a whole decade (!!) until her final show as an Angel in 2007. If you’re wondering just how much $$ she made from that era, Forbes reports that Gisele signed a five-year contract with VS for $25 million at the beginning of her career with them. Even though it’s a huge paycheck, that cash *still* doesn’t account for her final two years with the lingerie company, but we can probs guess that it was just as mind-blowing of a figure as her original deal, if not more.

Here’s a pic of the supermodel contemplating what she’s gonna do with that bucketload of cash, lol: 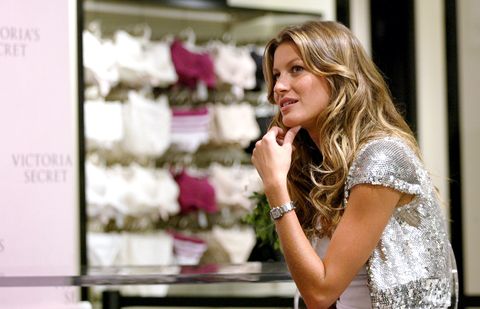 Wanna feel even more broke? Gisele was named by Forbes as the highest paid model in the world for the 14th year in a row in 2016, beating out other names you may or may not have heard of like Kendall Jenner and Gigi Hadid. *Le sigh* It’s hard seeing other people live your dream!

Gisele just might be the queen of spon-con, because back in the day before there were influencers working with brands, there were models who cashed in on multi-million-dollar contracts with brands. A few names Gisele has worked with in the past? Oh, ya know, just Pantene, Carolina Herrera, and SkyTV in her native Brazil. Of course she’s in demand given the model has been doing this for YEARS. Don’t believe me? The proof is in the pudding:

In 2014 (the same year that ^^ pic was taken) Gisele was actually the spokeswoman for Chanel No. 5. Going into 2015, she *also* appeared in more TV commercials in Brazil than any other celebrity, and by the end had been in over 500 ad campaigns, 800 fashion shows, on 2,000 magazine covers, and in 3,500 magazine editorials, per Celebrity Net Worth.

Another v profitable venture for Gisele includes her line of sandals with Grendene, which is basically a competitor of the Havaianas brand if that gives you a sense of the reach we’re talking here. According to Grendene’s annual report (per Forbes), the model’s Ipanema line accounts for 63 percent of the company’s annual exports, with 25 million pairs of sandals sold in 2010 alone. 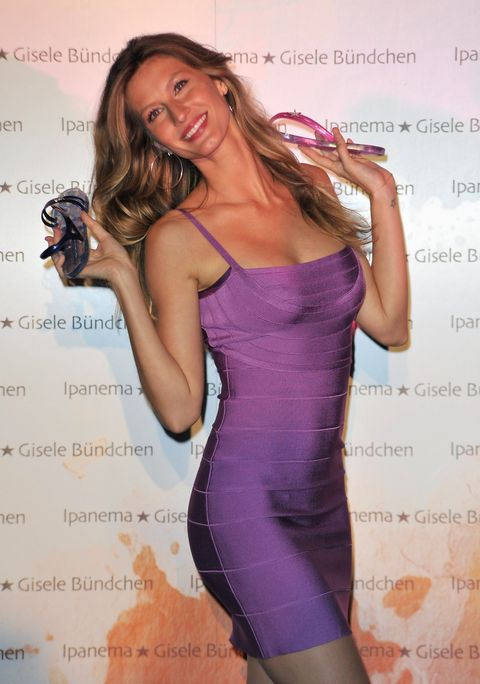 ^^This? Oh, just the look of a woman who could sell the sh*t out out of a pair of flip flops.

In 2018, the supermodel went on to publish her first memoir, Lessons: My Path to a Meaningful Life, which became an instant New York Times Bestseller (and definitely another drop in the bucket of her vast net worth). When speaking about how she felt going back in time and revisiting some of her more painful memories in the book, she was candid:

Like all people with large amounts of ~wealth~, Gisele and her husband Tom Brady have pretty sick properties in their real estate portfolio, all of which contribute to their total $$. In December 2020, Page Six reported the couple’s newest property purchase: a $17 million home on Indian Creek Island in Miami nicknamed “Billionaires Bunker” 😬. It was reported then that Gisele and Tom planned to knock down the 5,172-square-foot, five-bedroom mansion on the two-acre lot to build, well, a new one. However, it’s since been said that work has stalled on the property amid the couple’s speculated marital fallout.

Together, Tom and Gisele own at least four mega-properties, worth a total of $26 million, according to the New York Post. The outlet reports they have places in:

Recently, New York City divorce attorney Jacqueline Newman, dished to People that it’s likely the couple has already worked out how they would theoretically divide their assets should they ever divorce. “People of this magnitude of wealth don’t generally get married without a document that’s going to dictate what’s going to happen if it doesn’t run its course,” the lawyer said. Still, it’s important to note that this agreement may not *actually* account for purchases made together, such as their homes: “There probably were assets that were acquired during the marriage, so there may be squabbles about that to say the least.”

Combined, the supermodel and footballer are reportedly worth a total $650 million, which is mind-blowing to say the least. FWIW, in his first 20 years in the NFL between 2000 and 2020, Tom earned $330 million between his salary and endorsements while Gisele earned over $500 million in that same time period per Celebrity Net Worth. *Le sigh* Could she be any more iconic?!

So, what is Gisele Bündchen’s net worth today?!

Oh, that would be a cool $400 million buckaroonies, according to Celebrity Net Worth. BRB, googling how to instantly make my knees grow or something so I, too, can get discovered at my local mall 🤧🤧🤧.