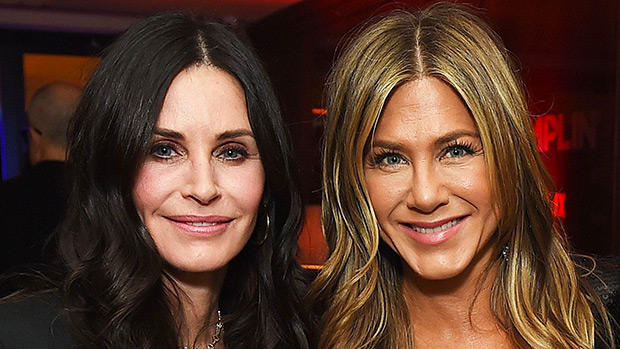 No fighting here! Courteney Cox, 54 and Jennifer Aniston, 49, sure looked like friends on Thursday night — pun definitely intended. The former sitcom stars reunited on Dec. 6 for the premier of Jen’s new Netflix movie Dumplin’ and posed for a sweet pic together, proving they’ll always be there for each other. Courteney looked super chic in an all-black outfit from her long coat all the way down to her heels. Her Friend‘s co-star sported the same color, but in a gorgeous sequined mini dress. Both of them wore their loose waves center-parted and were all smiles in their sweet shots together, which is sort of crazy considering the rumors about their feud swirling earlier this week.

The alleged fight started because Courteney was still in contact with Jennifer’s ex Justin Theroux, 47, a source told Life & Style magazine. When they met for dinner in September, “Jen brought up a lot of issues she felt hurt by, including how shut out she felt from Courteney’s wedding and how she always felt like a third wheel around her and Johnny [McDaid] because of their PDA,” the insider said. “Courteney accused her of being ‘bitter’ and ‘jealous.’ Jen said the only way she’d think about rebuilding things would be if Court apologized.” But with these two cozying up at the Dumplin premiere with matching sweet smiles, we doubt these two were ever feuding. They look like better friends than ever!

We’re loving these pics of them and only wish there were more. Maybe at Courteney’s upcoming wedding?

The only thing that would have made this pic better? An appearance from either Matthew Perry, 49, Lisa Kudrow, 55, David Schwimmer, 52, or Matt LeBlanc, 51 — or all of the above!