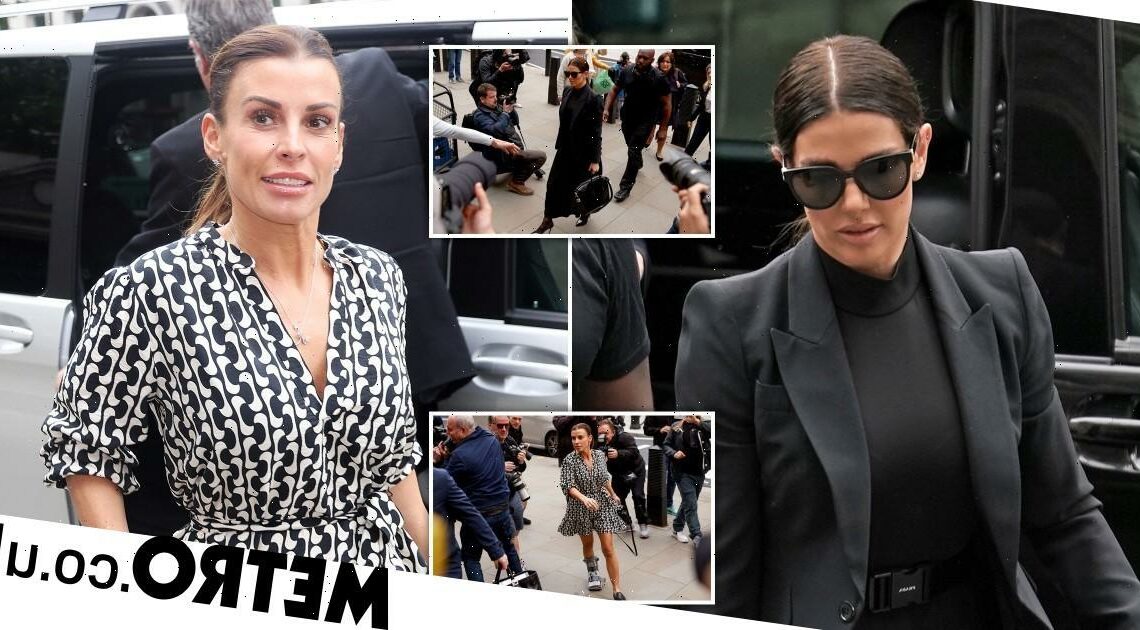 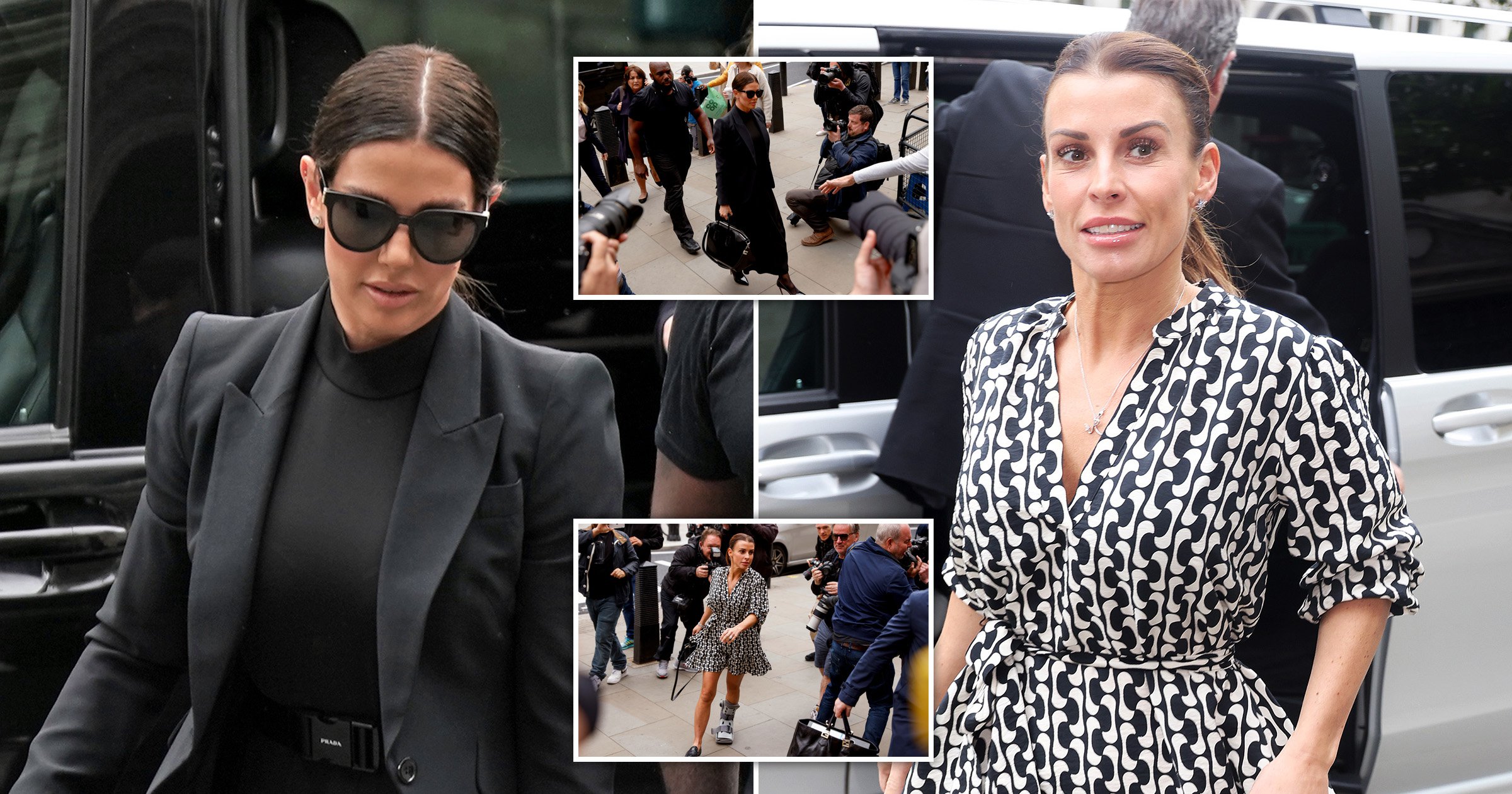 What Rebekah Vardy and Coleen Rooney have turned up to court wearing is incredibly telling, according to body language expert Judi James, with the wide grin of Rooney suggesting ‘she’s winning so far’.

On Tuesday Rooney was again joined by her husband, former England footballer Wayne Rooney, as she arrived at the High Court in London for day two of what has been dubbed the ‘Wagatha Christie’ trial.

Yesterday the anticipated legal showdown – after Vardy sued Rooney for libel following Rooney’s accusation her fellow WAG had leaked ‘false stories’ to the media, which Vardy denies – began at the Royal Courts Of Justice in London, with both women arriving to the courthouse today within minutes of one another.

Rooney wore a white and black patterned outfit while her left foot was still in a brace.

She flashed a broad smile as she strode past waiting photographers and press outside.

Vardy arrived not long before Rooney, dressed all in black, wearing sunglasses, a jacket, long skirt and high heels, with a serious and stoic expression.

According to body language expert James, there’s a lot to be said about the clothing choices made by both women today.

James tells Metro.co.uk while ‘nothing screams ‘wardrobe challenge’ like a high profile court case ‘neither WAG seems to have risen to the occasion in terms of delivering the fashion along with the drama’.

She compared Rooney’s ‘equally dour and rather anonymous suit of day one’ to today’s outfit, believing her more positive public spirit on the way in may suggest her feelings towards how the case is going so far.

She says: ‘She seems to have opted for a more signature short dress today. She is also smiling on the way into court in what could either be bravado or a genuine sense that she’s winning so far.’

According to the body language expert, the foot brace Rooney is wearing – after reportedly suffering a fracture at home – ‘adds a strange touch of vulnerability to her look’, while noting ‘the wide, energetic striding walk suggests bravery and a tough approach’.

When it comes to Vardy, James described her ‘corporate nun chic’ look was sending an ‘anti-WAG’ message.

James says: ‘Her colours are dour and her tailoring severe, including angular shoulder pads and demure top to ankle covering up.

‘She seems to be sending an anti-WAG message out, suggesting she is a deeper and more assertive woman than we might assume.

‘Her eyes are hidden behind huge shades and her walk reeks determination and decisiveness.’

Wayne Rooney has attended the trial alongside his wife this week, however Vardy’s husband, Jamie Vardy, is yet to show up ahead of an upcoming football game where his team Leicester will play against Norwich.

Be that as it may, if he were in attendance, James believes ‘he wouldn’t recognise his wife in this guise’.

In October 2019 Rooney accused fellow WAG Vardy of leaking ‘false stories’ about her private life to the media, after she said she carried out a months-long ‘sting operation’.

The wife of former England star Wayne Rooney was dubbed ‘Wagatha Christie’ when she publicly claimed her fellow footballer’s wife shared three fake stories she’d planted on her personal Instagram account, that only Vardy’s account was able to see, with The Sun newspaper.

These fake stories included Rooney travelling to Mexico for a ‘gender selection’ procedure, her planning to return to TV, as well as the basement flooding at her home.

Rooney wrote on social media at the time: ‘I have saved and screenshotted all the original stories which clearly show just one person has viewed them.

At the time, Rooney’s post was widely shared and heavily parodied on social media, including by the Twitter account of Jeremy Corbyn, then-leader of the Labour Party.

Vardy, who is married to Leicester City striker Vardy, denies the accusations and is suing Rooney for libel.

Under English defamation law, the burden of proof now will be on Rooney to prove that her post was ‘substantially true’.

Yesterday Rooney’s barrister said that she was appearing in the courtroom ‘not because she wants to, she’s here because she has to be’.

He said: ‘She’s been brought here because of something she wrote.

‘She didn’t want to have to write it any more than she wants to be here.’

Mr Sherborne said social media could be used ‘to share things that you would rather the world didn’t know’, adding: ‘That was the point of her (Mrs Rooney’s) private Instagram account.’

Yesterday also saw Vardy faced with questions over previous comments made on Peter Andre’s penis, as well as claims she left Harry Maguire’s fiancee ’embarrassed’ after allegedly ‘tipping off paparazzi’.

It was also found yesterday footballer Mr Rooney will give evidence to the court during the trial, which is expected to last seven days.

Emmys 2022 Preview: Are There Really Frontrunners With This Much Content?