CHRISTOPHER STEVENS: These celebs won't be chipping their nails

We Are Not Alone

Just be thankful it’s not much worse. Though Ruby Wax, Emily Atack and Mel ‘Scary Spice’ Brown might seem like holiday companions from hell, imagine if they were joined by Gordon Ramsay.

The celebrity chef is an executive producer on the all-women travel-ogue Trailblazers: A Rocky Mountain Road Trip (BBC2), and there’s still time for him to barge into their journey, later in the series — perhaps as a chef at some pretentious restaurant in Aspen, Colorado.

As it is, this three-parter flaunts all the weary cliches of his boys-own expeditions with Gino D’Acampo and Fred Sirieix.

Take three celebs feigning a friendship, stick them in an oversize vehicle they can’t drive, send them riding and rock-climbing, engineer a couple of tense encounters with locals, make them eat and drink stomach-turning delicacies, and link it all up with heavily scripted vulgarities and sing-songs. 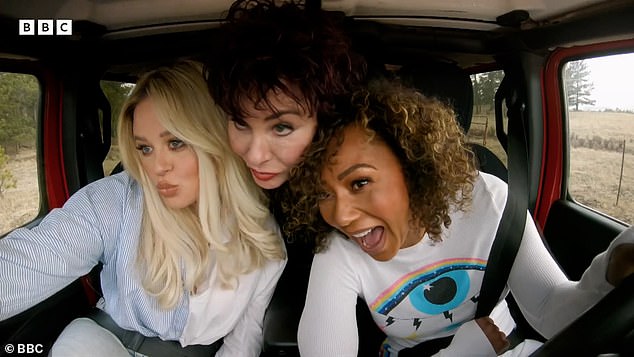 The fake camaraderie here was especially grating, as it was painfully obvious that Mel, Ruby and Emily had nothing in common and no interest in each other.

Mel claimed that the other two reminded her of Ginger and Baby, her favourites in the Spice Girls, but I’m quite sure she said it only to let us know that she can’t stand Mel C or Victoria Beckham.

The trio pretended to be following in the footsteps of Isabella Bird, a Victorian Yorkshire woman who came out West for the pure air and was wooed by a drunken one-eyed hermit called Mountain Jim.

Snuggly shocker of the night:

Bargain-hunting Denise Van Outen was thrilled on Secrets Of The Middle Aisle (C4) by a heated electric dressing gown. It plugged into the mains. Why not just wear an extra pullie? There’s less chance of a short circuit if you spill your cuppa.

Emily read the saucy bits aloud from a romantic novel, Embrace Of The Wild, with passionate clinches between Jim and Isabella. Its author, Linda Ballou, promised them that a trek through the mountains was ‘like the kiss of a lover — you never forget it’.

The girls treated it more like a peck on the cheek from an in-law . . . unwanted but unavoidable. Ruby had a go at climbing a crag and gave up after a few feet. Mel got further and, for all her dramatics, might have been tackling Mt McKinley but, as she clung to the cliff, it was evident none of her long pink nail extensions was chipped.

Though Emily made sure everyone knew she was on a celebrities-only dating app and Ruby didn’t let us forget she has interviewed both Madonna and Donald Trump, neither of them is actually famous — unlike Mel. Even the reclusive Mountain Tim — Jim’s modern day counterpart — had heard of Mel. ‘Do you wanna see the house?’ he asked her when they visited. ‘Do you really, really, really wanna see the house?’

The gags were just as corny on We Are Not Alone (Dave), a one-off sitcom about an alien take-over. That came as a disappointment, since the script was written by Ben Willbond and Laurence Rickard, from the Horrible Histories and Ghosts team. 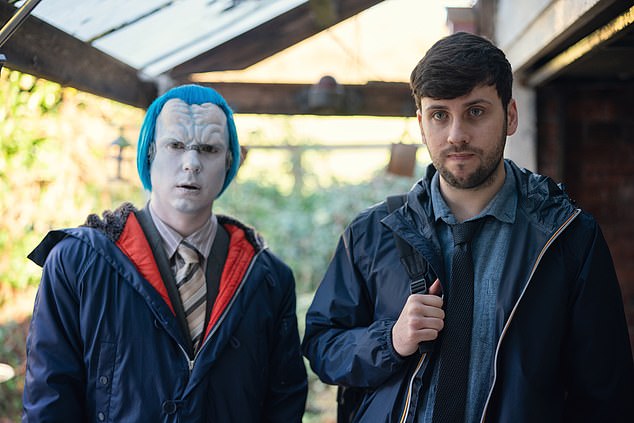 Any comedy about spaceships and extraterrestrials needs to be bold and innovative, because the brilliant Red Dwarf has been doing these jokes so well for so long. But even the title, We Are Not Alone, lacked imagination.

It starred Declan Baxter as a council planning officer in Clitheroe, Lancashire, trying to dissuade interplanetary invaders from vaporising the population.

Vicki Pepperdine and Mike Wozniak, in blue wigs and Doctor Who prosthetics, tried their darndest with the premise. But jokes that were funny the first time (such as ‘hands up’ being mistaken for an Earthling greeting) were beaten flat with repetition.

Lame allegories about Brexit and immigration took over, until the story became a juvenile parable about world peace. It ended with all the world’s nuclear missiles being fired into the sun. Right on, man.