Home » Celebrities » Christine Brown: Is She Done with Polygamy Forever? 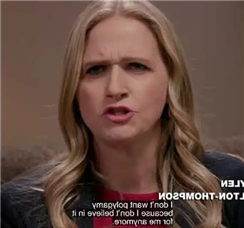 Christine Brown: Is She Done with Polygamy Forever?

That much we now know for certain.

But is Christine Brown done with polygamy in general?

This is a very different question.

As Season 16 of Sister Wives has played out over the past several weeks, it’s been evident just how unhappy Christine became toward the end of 2020 and into the year 2021.

And it’s also been evident why.

Amid Kody’s very strict COVID-19 protocols, Christine voiced a few objects… got shot down and cursed off… and then had her sex privileges revoked by Kody.

We’re not kidding: because he felt as if Christine betrayed him, Kody cut off all intimacy from Christine.

She boxed up his stuff. She placed it in the garage. And she emphasized on air that this arrangement was unacceptable.

“He goes, ‘I’m not interested in having an intimate marriage anymore. I don’t like your behavior. We’ll see if you can be a good sister wife,’ and all this,” explained Christine on the Sister Wives episode in question.

“I’m like, ‘That’s not enough for me. I can’t not have an intimate marriage.'”

This installment was filmed many months ago, but Christine followed up on her vow in early November by announcing she had, indeed, left her plural marriage.

Toward the end of this past Sunday night’s tell-all special, meanwhile, viewers watched snippets from next week’s second part of this same special.

In the footage, Christine answered the query posed above.

“I don’t want polygamy because I don’t believe in it for me anymore,” she told reunion host Sukanya Krishnan, confirming once and for all that she’s finished with Kody… and the type of relationship Kody believes in.

Christine, as many Sister Wives fans know well, comes from a polygamous family herself.

Both her aunt and mother both left their own plural marriages many decades ago; while this aunt, Kristyn Decker, now serves as an anti-polygamy activist.

In November 2019, Decker even urged her niece to get the heck out of her situation, labeling polygamy as an abusive cult.

“The Browns are miserable-happy,” Decker said back, elaborating as follows:

“They’re miserable on the inside. I don’t think any of them know what genuine happiness and freedom is. I thought I was happy. I thought life was great and I was serving God.”

She lost that sense of community.

“Kody and I had been having such a rough time for so long,” Christine admitted on air.

“It’s really hard to be in a room with everybody and watch him be incredible in other relationships and know that your own is terrible.

“What am I supposed to do in a room where I feel like I don’t matter?

We’re just glad Christine at last made the decision to leave.

She seems pretty darn happy about it, too.

Now the only question that remains is this one:

Will Meri or Janelle soon follow Christine’s lead and do the same?