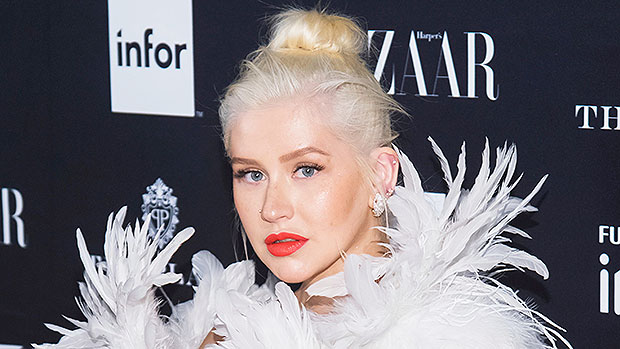 Whoa, we were not expecting this! Christina Aguilera turned 38 on Dec. 18, & one photo from her celebratory night got a little wild. See the shocking pic here!

Xtina’s 38th birthday got a little X-rated. Christina Aguilera celebrated her big day on Dec. 18, and a few photos from her b-day bash were risque, to say the least. The “Dirrty” hit-maker had a wild night out, and one pic will send your jaw dropping to the floor! In the photo, Christina’s fiancé, Matthew Rutler, is seen posing in a cowboy hat, as Xtina bends down and seemingly simulates oral sex on him. Sure, there is a layer of clothing between Christina’s man, and her mouth, but still – we were not expecting this spicy imagery!

While it’s unclear where the epic bash was held, one things for sure – Christina dressed to the nines for the occasion! The songstress donned a white fur coat, and a a vivid rep lip for the night out. In addition to her fiancé, guests Charmaine Baquiran, Luke Gilford, Gilbert Saldivar and Jeri Slaughter joined the festivities. It looks like Christina did it real big for her bday, but hey – you only turn 38 once!

Christina has a lot to celebrate, and just two weeks after her birthday party, she will take the stage at Dick Clark’s 2019 New Year’s Rockin’ Eve with Ryan Seacrest. The singer is set to headline the show! Xtina will be joined by the likes of Bastille, Dan and Shay, Dua Lipa, Kane Brown, and New Kids On The Block as well. What a way to ring in the new year!

Perhaps, Christina doesn’t mind landing herself a spot on the naughty list this year. As the holidays roll around, the singer has revealed some new merch, and it’s equally as risqué as her birthday shenanigans! Her latest t-shirt design features the words “suck my” across the front, followed by a picture of a candy cane. Very cheeky, Christina!