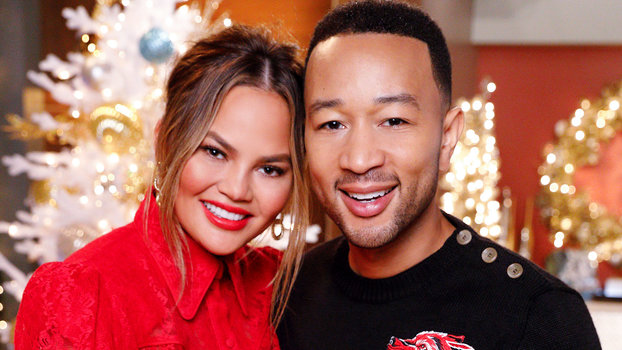 When it comes to the holidays, Chrissy Teigen is practically Mrs. Claus.

Seriously, you’d be hard-pressed to find someone who loves the giving season more than the reigning queen of social media. And this year, she and husband John Legend have stepped up their celebration game in some major ways. Just last week, the duo hosted their own festive special, A Legendary Christmas with John and Chrissy, which aired the same night that Legend took to the stage to perform on NBC’s Christmas in Rockefeller Center. There’s no doubt about it: they’re the It couple of the holidays.

Teigen continued to spread some cheer of her own in New York City, where we sat down with the star to chat about her tried-and-true gift-giving strategies — starting with those lucky enough to call her a friend. “Everybody in my life has such different personality types and interests, so my go-to has always been gift cards and cash,” she told InStyle at the Chase Ultimate Rewards #OneLessThingHoliday Pop-Up Shop, which celebrated the ways that Chase cardholders can minimize holiday shopping stress by using rewards points and scoring major discounts on gift cards. “It definitely depends on the person, but I truly enjoy being able to get people stuff that they want in the end. Nobody’s ever been mad at a gift card.”

Given the hectic Hollywood schedules of those in her inner circle, Teigen often finds creative ways to treat her pals. “For a lot of my friends and I, we work so much all year round that there’s no true summer and no true weekends,” she said. “So when it comes to the holidays, they tend to take off and go on vacation or something. I love to find out what hotel they booked and maybe pay for a dinner they’re having there or send a bottle of wine or something personal.”

That personal touch also extends to Teigen’s gifts for her husband — although with Legend’s birthday landing on Dec. 28, “the poor guy gets rolled into that whole birthday-Christmas thing,” Teigen said. Making things even more challenging, Legend is “really tough to shop for,” she explained. “He doesn’t have any true interests. It’s not like he’s a sports guy; he’s one of those guys who he likes every team; they all deserve to win! He’s tough.”

By now, Teigen has figured out what does rank with Legend. And much like the star himself, it’s practical yet stylish. “Every year I get him what we call a computer bag, but that sounds so nerdy,” she said. “It’s like a man-bag, computer-bag thing, so it’s usually some kind of leather tote that he can fit his laptop in with all the cords, the watch box, and his passport. All that travel stuff. That’s the only constant in our life, that we’re always going to be traveling. So I love getting him that bag. Aside from that, a robe. We’re very home-y people. It’s either cooking stuff, cozy stuff, or the man-bag.”

Designer-wise, Teigen has found a clear winner in the man-bag category: Tom Ford’s Buckley briefcase. “It’s the one with the chunky zipper, and every year they do it in a different color or a different fabric,” she said. “The suede ones are so so beautiful and they last forever and get better with age. The dustier and more scratched they get, the cooler they get. I always appreciate that in a gift. And their backpacks are amazing, too. That’s like usually the only thing he gets for his birthday, and then Christmas is a lot of little things. He just loves a crew neck tee. He’s simple dude.”

The couple’s young daughter, Luna, is also easy to please. “She’s two and a half, so she’s gonna love the bow that something came with,” said Teigen, laughing. “She’s gonna love the wrapping paper and the box that it came in, too.” Packaging aside, Teigen and Legend are careful to avoid spoiling Luna and her brother, six-month-old Miles. “You don’t want to give them too much, because honestly, the kids get so much year round,” said Teigen. “They get sent random things from different brands all the time, so you want them to really appreciate the things they get. We’re not very materialistic people; We love doing art projects with her and giving personalized things to each other — like little hand prints from the kids. That way, we know we [each] spent time with that kid, doing that for each other. That, for us, is way cooler.”

That’s not to say little Luna will be missing out on presents this year — although she’s not quite making a wish list for Santa just yet, either. “Luckily, she’s not into commercials or anything yet, so she won’t see a commercial and be like, ‘I want that,’” said Teigen. “She doesn’t really grasp that it’s for sale in stores.” Luna’s current obsession? “She’s still so into Sesame Street,” said Teigen. “I just filmed an episode and we took her to Sesame Street and they gifted her with this huge gift bag. She’s potty-trained now so she has her big-girl underwear, and it’s just so adorable. She’s into anything Elmo, anything Abby Caddaby, anything fairy princess. I bought myself a giant pair of wings so I could fly around the house with her. She’s just like such a girly girl, which is so funny to me, because I thought she would be such a tomboy. But she’s a girly girl. It’s fun to shop for them at that age. Right now the holidays are all about the kids, so it’s really cute.”

This year is particularly special for the family, given that it’s Miles’ first holiday season. The most exciting thing for Teigen? “Oh my gosh, I think dressing him up!” she exclaimed. “Before I had a little boy, I was like, ‘Oh nothing could be cuter than little girl clothes.’ Girl clothes, they have the tutus and the little leggings and the knee socks and tiny sandals. But boy clothes are so cute. He just looks so great in anything, whether it’s a little cap or…I don’t know, he wore this fur vest the other day, and I was like, ‘If I wore this, I would look insane.’ But he’s just so adorable in everything.”

Other than festive kids’ fashion, Teigen is looking forward to capturing Miles’ precious moments. “I’m excited to take little pictures with him by the tree,” she said. “He’s still so young that he just likes to look up at the lights. If we’re going for a drive and he’s in his car seat, he’s still looking around the neighborhood at how beautiful everything is. He just gets these big, wide eyes. But for now, he’s just so young. This is the first time Luna is really able to embrace the holiday season, so I’m excited to be able to take her out and get things for Daddy!”

Ever an animal-lover, Teigen can’t forget her fur babies: French bulldogs Pippa and Penny, and bulldog Paul. “They have stockings, and usually bones go in them,” said Teigen. “Right now, they’re also very into water bottles. Just garbage. They crunch on water bottles all day, that’s their ultimate. But they’re the easiest to shop for. Just one stop at Petco and it’s done.”

The best part about gifting the family’s pups, according to Teigen? “They don’t expect anything, and they get something!”