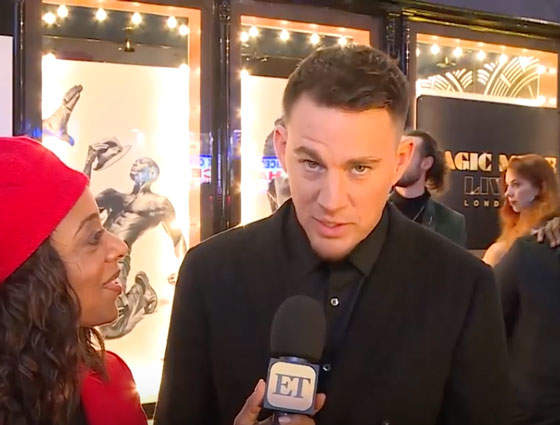 Amanda Bynes recently gave a comeback interview to Paper magazine. In the interview, Amanda claimed that she gave celebrity potato Channing Tatum his big break when she got him cast opposite her in She’s The Man. Entertainment Tonight spoke to Channing at the Magic Mike Live premiere in London and asked him about Amanda’s claim. Instead of responding “who?“, Channing made with the graciousness.

Amanda, who is sober and appears to be doing good after some messy, messy, messy driveway-torching times, got into how she fought for Channing to play the love interest in her remake of the far superior Just One Of The Guys, even though the producers didn’t want him. Amanda pushed for him and told producers he’s a star.

Channing had nothing but nice things to say in response. Either that, or he’s afraid that she might come after him if she gets back on the Adderall.

“I guess she sort of told me [that she fought for me]. I love her. I’m so happy she’s killing it again and just back on the right.

She’s so talented and so special. She’s been doing it… I mean, I think it’s so impossible when you start at such a young age to keep perspective. It’s tough,” he said, referring to Bynes’ tough few years, during which she admitted to drug use and suffering from depression.

Channing went on to say how good she was in She’s the Man. (She was no Joyce Hyser!)

“She was just so alive. You never knew what was going to come out her mouth, she was just on fire… I haven’t seen her in so long. I love you, Amanda, and I hope you’re doing well.”

Amanda’s going to hear this and come calling when she wants to put that comeback into first gear, Tatum. Maybe you can get her a part in your upcoming gender-swapped reboot of Splash. Then again, starring in that foolishness might send her screaming back to drugs. Nevermind.