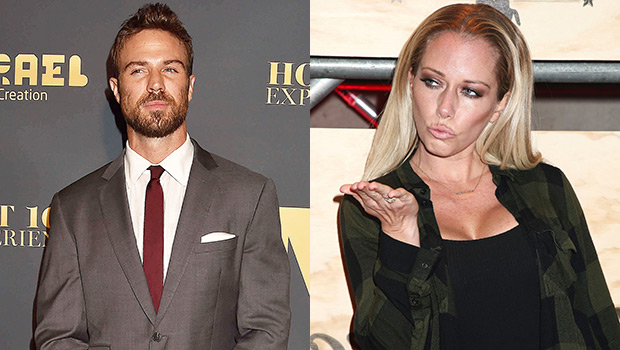 Fans are convinced something is going on between Kendra Wilkinson and Chad Johnson after photos surfaced of them holding hands on Jan. 23 — and he totally tried to avoid answering questions about it later that day!

Are Chad Johnson and Kendra Wilkinson dating or what?! The Bachelorette and Bachelor in Paradise alum appeared on The Tomorrow Show with Kevin Undergaro just hours after pics of the two holding hands were posted online, and when asked about the rumored romance, all he had to say was “no comment.” Of course, the show host pushed and pushed, but Chad wouldn’t give a straight answer as to what was going on. “Yeah, she’s cool…I mean, we’re just….” he stumbled. “We were walking down the street and I was like, ‘What up Kendra,’ and we held hands. Boom.”

Kevin pressed Chad about why he didn’t want to talk about it, to which the reality star responded, “No comment. I don’t — I don’t know. I just…not right now. Not yet.” Meanwhile, Kendra’s rep confirmed to Access Hollywood that the PDA-filled outing was just “for a taping” and that any romance between the two is “not real.” The rep didn’t expand on what the taping was for but made it clear that the dating rumors should not be taken seriously. Still, the two looked pretty darn happy, with big smiles on their faces, when they were photographed.

Kendra has been open about her struggle to get back on the dating scene since she split from her husband, Hank Baskett, in 2018. She’s admitted on Twitter that she’s had prospects, but said she is simply not ready to date just yet, and is instead focusing on herself and her two kids.

Meanwhile, Chad is currently starring on the second season of MTV’s Ex on the Beach, where he’s sparked a romance with The Challenge star, Nicole Ramos. It’s unclear if their relationship continued after the show.