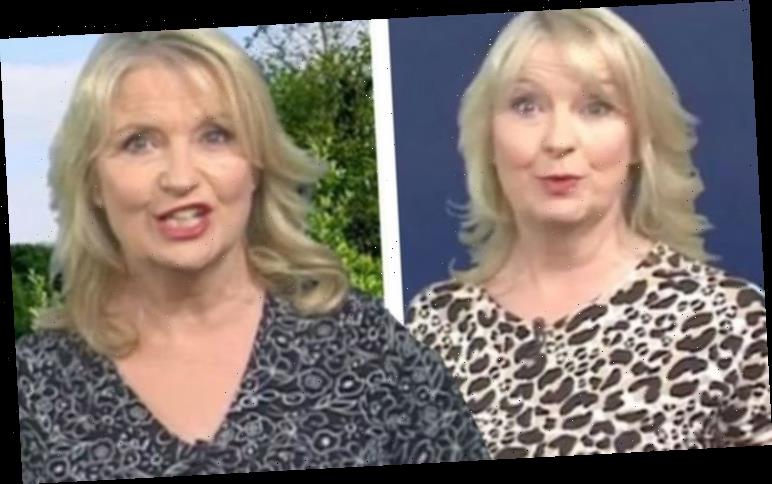 Carol Kirkwood, 58, took a lot of people by surprise on Tuesday, after she announced how long we have until Christmas is knocking on our doors. But amid all the excitement, she was also left shocked to learn that some shops had already started displaying their festive stock four months early.

I LOVE Christmas but keep it in December!

Her original tweet received mixed feedback from fans, some of whom were all for getting their Christmas tree out and hanging their stockings on the fireplace to bring a bit of cheer to their lives after a tough year due to coronavirus.

Others however, were not so welcoming of the reminder.

The meteorologist shared the startling fact that she had learnt to her 193,000 Twitter followers.

She wrote: “Someone has just told me, 4 months today will be Christmas Day! What?!” 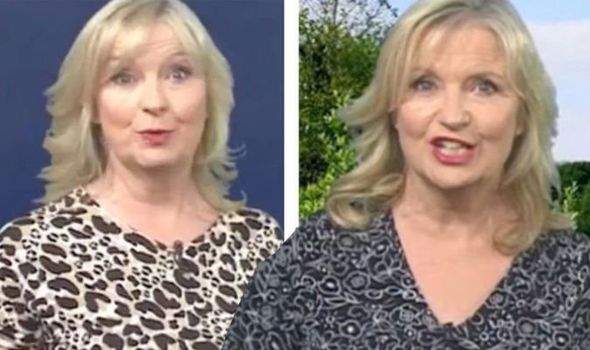 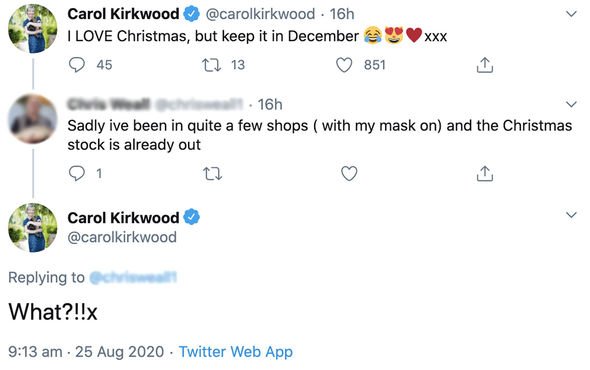 As fans rushed to the comments section to share their thoughts on the early countdown, Carol felt she had to clarify that she also prefers her Christmas to begin in December.

“I LOVE Christmas but keep it in December!” she exclaimed in a separate tweet in a bid to put a stop to all the Christmas talk.

But it wasn’t long before she was left totally gobsmacked by a fan.

Replying to her post, they noted: “Sadly I’ve been in quite a few shops (with my mask on) and the Christmas stock is already out.” 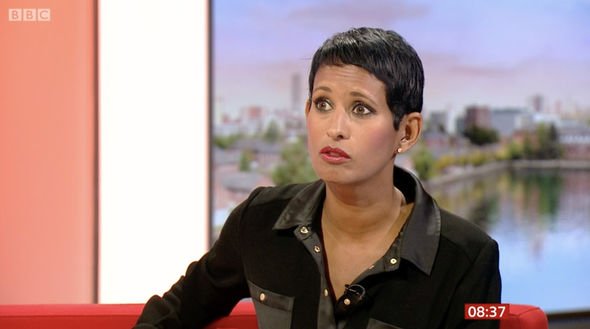 The TV star couldn’t quite comprehend what she’d just read and could only muster the energy amid her confusion to respond with a shocked: “What?!”

Even her fellow BBC colleagues weren’t impressed with her bringing up Christmas this early in the year.

Naga Munchetty seemed eager to avoid the news, as she wrote back: “You. Be. Quiet.”

Dan Walker also shared her post and exclaimed: “Stop it immediately,” alongside a crying with laughter emoji and a Christmas tree.

It seems they also share her sentiment that any mention of Christmas should be quashed until December.

Elsewhere, Carol and her former BBC Breakfast co-star Bill Turnbull, engaged in a little back and forth taunting as he poked fun at her “easy” job.

The forecaster was less than impressed after he made out that presenting the weeks weather wasn’t that hard.

“It’s pretty easy this weather malarkey, it’s all on a screen you’re pointing at!” he giggled smugly as the pair chatted on his podcast.

He proceeded to run off a few weather quotes, referring the technical lingo as Carol groaned in the background.

“I remember you and I doing the weather together at one point,” she snapped, before hitting back at his insinuation that weather forecasting is easy work.

“You were rubbish!” Carol slammed.

Bill laughed, admitting she was right as she insisted there’s “a lot more to it” than what viewers see on-screen.

BBC Breakfast continues this morning at 6am on BBC One.

Big Brother After Dark still getting requested by fans of the show, but it may be gone for good