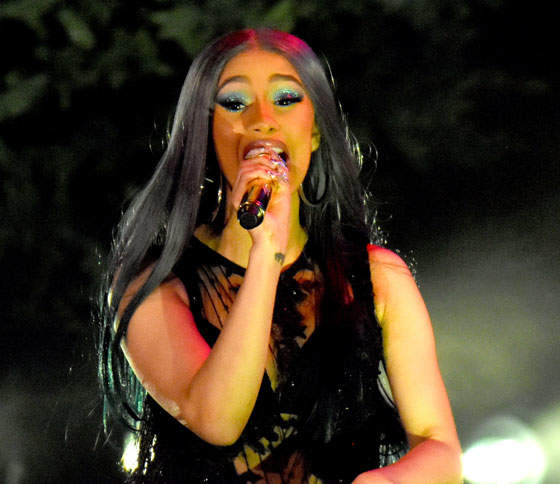 Cardi B‘s publicist Patientce is proving to be the hardest bitch in the PR game since Lizzie Grubman. We’ve been waiting for a PR champ to step into the ring and do something more noteworthy than arrange PR marriages and suspiciously-timed charity donations, and Patientce is BRINGING IT.

Earlier this month, Patientce arranged for Offset to crash Cardi’s set with half a stage worth of flowers spelling out “Take Me Back Cardi“. Now Patientce has stepped up her publicist duties big time. She threatened to whoop a woman for back-talking Cardi when their entourage arrived in Sydney Airport yesterday. Publicist and bodyguard in one – Patientce is who you want in your corner!

Because I am the type of person who watches Instagram live videos on Saturday night, I was one of the lucky 65K or so who caught Cardi explaining what happened to cause the near brawl. Cardi had just touched down in Sydney after a ten hour flight from Hawaii and was not feeling cute or awake. She wore her jacket over her head as she walked through the airport.

According to Cardi, a paparazzo had just uttered a racist remark to her, which set her on edge. Moments later, Cardi turned down an elderly Australian woman who asked for a photo, prompting the woman to say, “No wonder your husband left you“. Whoa, Shiela, that escalated quickly! Side bar: Can we make Whoa, Shiela the Australian equivalent to Damn, Gina?

What the stunned airport worker actually said to the shocked elderly woman was, “That was uncalled for,” which is hilarious, considering that granny did look like a child who had cacked her daks (Australian for shit her pants) the moment Patientce locked eyes with her.

And are Cardi and Patientce sorry? That would be a big NO. Cardi posted a series of videos after her live feed justifying her bad ass-ness and lack of fucks given:

And here is the video of the “altercation” followed by Patientce’s explanation:

Patientce has gifted all of us with the only job advice we will ever need and what I’ll be telling my future grandchildren as I tuck them in at night:  “I‘m not letting no job title keep me from being who I am! If your job title keeping you from being who you are, ain’t nothing real about you. Period”.

How to get rich: Ignore rejection and stick to your goals