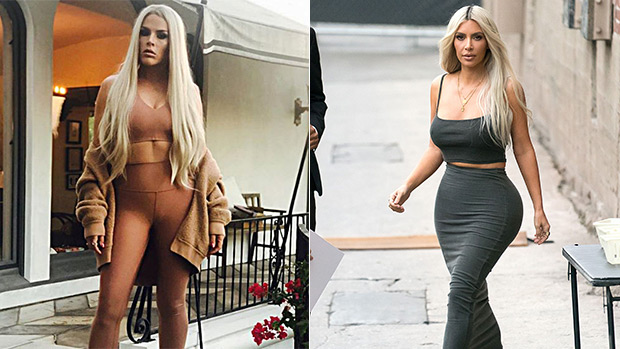 Look again — that’s not Kim Kardashian! Ahead of Kim’s appearance on her late-night talk show, Busy Philipps transformed herself into the sixth KarJenner sister and…it was eerily accurate!

“In Honor of [Kim Kardashian, 38] being a guest on Busy Tonight THIS SUNDAY, right after the finale of [Keeping Up with the Kardashians], I got a full Kardash makeover,” Busy Philipps, 39, captioned a Dec. 6 Instagram post. With long flowing blonde locks, a dark bronze crop top (with matching leggings) and clear pumps, Busy came off as a forgotten KarJenner sibling. The skin-tight outfit (that seemed pretty sheer) could have come out of Kim’s closet. Thankfully, fans don’t have to worry about seeing double when Kim appears on Busy Tonight, as she said the makeover “lasted like 4 hours.”

It seems being a Kardashian is harder than it looks. Though, what do we call this Kardashian-ized Busy? Karen? Kacey? Kelly? Actually, it’s “Krissy,” as she previewed her preview – sorta – on last week’s episode of Busy Tonight. Busy turned herself into a “Kardashe-Aint,” undergoing a Kardashian drag makeover to show what a member of the “reality TV royal family” has to do in order to look the way they do. “I understand all the selfies,” she said. “I’m truly fascinated by my face right now.”

“Doing this on the regular seems insane,” Busy said as she went on her errands while Kardashian-ized. “Oh, it’s harder to do stuff when you’re dressed this hot.” It appears that a latex dress is not the most practical outfit out there, especially when you’re hitting up Whole Foods. Her 5-year-old daughter Cricket said that the dress was made out of “balloons,” which is adorable — and correct.

So, what did Kim think of this makeover/tribute? When Busy showed her a photo, Kim said the Freaks and Geeks star looked like the late Anna Nicole Smith. So, uh – good job, Busy?

Kim will have plenty to talk about when she joins Busy following the season finale of KUWTK. An early preview of the show indicated it will focus on the fallout from Kanye West’s appearance on TMZ Live in which he said slavery was a “choice.” Kim, per People, said that Ye’s appearance left her “hysterically crying” over her husband’s mental state. The episode will also feature Kim’s efforts to successfully free Alice Johnson from prison.

Keeping Up with the Kardashians airs this Sunday at 9 PM ET on E!. Busy Tonight airs at 10 PM on E!.