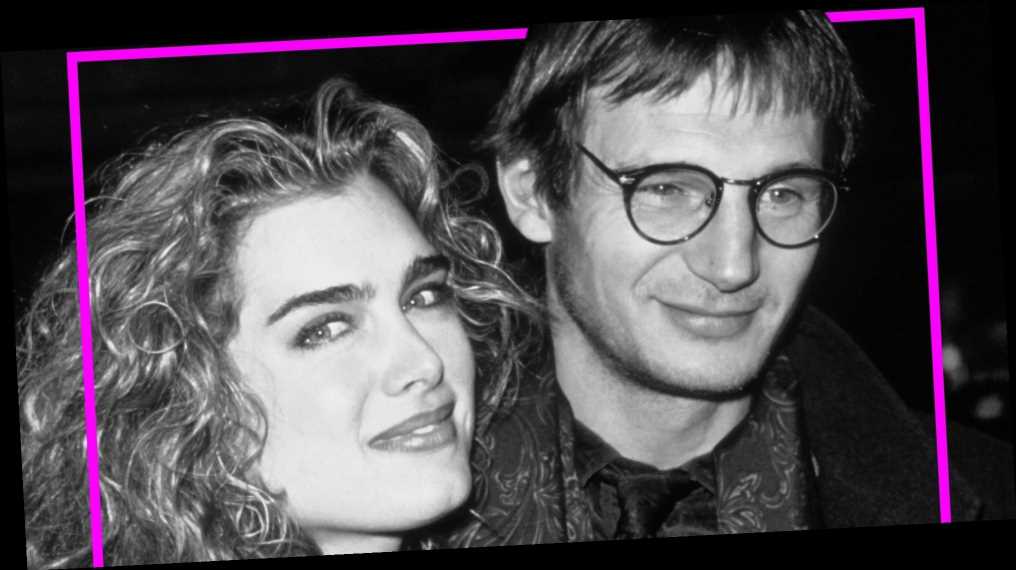 Brooke Shields Said Liam Neeson Proposed and Then Ghosted Her How They Met: It’s unclear exactly how they met, but Hollywood is small and Neeson had quite the reputation for dating the industry’s best and brightest (see: Helen Mirren, Julia Roberts, Barbra Streisand, Sinead O’Connor).

They began dating in late 1991 or early 1992. Shields wrote of this period in her memoir, There Was a Little Girl: The Real Story of My Mother and Me, describing Neeson as “a tall Irish actor and a drunk who was thirteen years my senior.”

Why We Loved Them: Though Neeson and Shields’s relationship doesn’t sound particularly healthy, we have no choice but to stan a famous actor who “woos” his dates with bad wine.

“He wooed me with his brogue, his poetry, and his shitty choice of cheap pinot grigio wine,” Shields wrote in her 2014 memoir.

Oh, and between Neeson’s glasses and Shields’s hair … the spirit of early ‘90s was alive and incredibly well within these two. When They Peaked: The couple reached their true pinnacle decades after their split, when Shields appeared on Watch What Happens Live with Andy Cohen. During the “Plead the Fifth” segment, Cohen asked Shields if she could confirm the rumors that Neeson is “famously well-endowed.” The actress replied, “true,” to which Cohen asked, “it’s massive?” Shields, who commented that her husband “is going to kill me right now,” told Cohen, “it’s ample."

The Breakup: Shields wrote that she was “so impressed with going out with a real movie star,” but that seems to be one of few positives from their time together. The Blue Lagoon star said Neeson “hungered after any female attention,” and after he proposed to her (without a ring), he ghosted.

Following a Christmas in which they were “buzzed all day long,” Neeson left for L.A. after his basement had allegedly flooded.

“I told him to phone me when he arrived,” Shields wrote, to which Neeson said, “‘Oh, it’ll be late darlin.’”

After he left, Shields claimed she “never heard from him again.”

"He was there one minute and gone the next. You know, I was shocked, I couldn't believe it. Yeah. He was taken,” Shields reportedly told The Times of the predicament, referencing Neeson’s famous action franchise. Despite her previous statement, the actress did in fact see her ex again.

In an interview with People shortly after the book’s release, Shields admitted that Neeson proposed a second time.  “He came back after the first time he left me and asked me to marry him again,” she said.

“This was before he started to do a play [Anna Christie]. And I said, ‘No, no, no, because knowing you, you’ll probably fall in love with your next leading lady and marry her, so I’m leaving myself out of this.’ And I was dead right.”

Anna Christie's Broadway revival opened in early 1993 and Neeson wed his co-star, the late Natasha Richardson, the following year. They remained together until her death in 2009.

Still, Shields insists there’s no bad blood between her and the Schindler’s List star.

When Shields played Sally Bowles in Cabaret back in 2001 (a role Richardson had played three years prior), she said the British actress came to visit her backstage. Shields ran into Neeson years later and asked him to thank his wife for her support.

“Just tell her I was really honored she came backstage,” she told him. “She’s the original and she’s amazing.”

Neeson reportedly owned up to his treatment of Shields as well. According to AOL, Neeson corroborated Shields’s account to WWHL’s Cohen in 2015 — well, sort of.

"I'm not going to deny it. I actually don't really remember. It was many years ago, but … Dating, and then I flew off to L.A., and I didn't call her back. It sounds … Yeah, I guess it was," Neeson said.

Though he admitted they haven’t kept in touch, Neeson called Shields “a great lady and a fantastic girl."

Where They Are Now:

Neeson and Richardson share two sons, Micheál Richardson, 25, and Daniel Neeson, 24. The actor’s relationship status is unclear, though he has been linked to businesswoman Freya St. Johnston repeatedly over the past decade.

The Irish star has several projects in the works — his latest action flick, Honest Thief, is out Oct. 16.

Shields famously wed tennis star Andre Agassi in 1997, but the marriage was over just two years later. The actress married her current husband, producer and screenwriter Chris Henchy, in 2001. The couple shares daughters Rowan, 17, and Grier, 16.

The mother of two is currently filming Netflix rom-com A Castle for Christmas alongside Cary Elwes.

#TBT: Check in every Thursday as we throw it back to some of our favorite celebrity couples of all time.