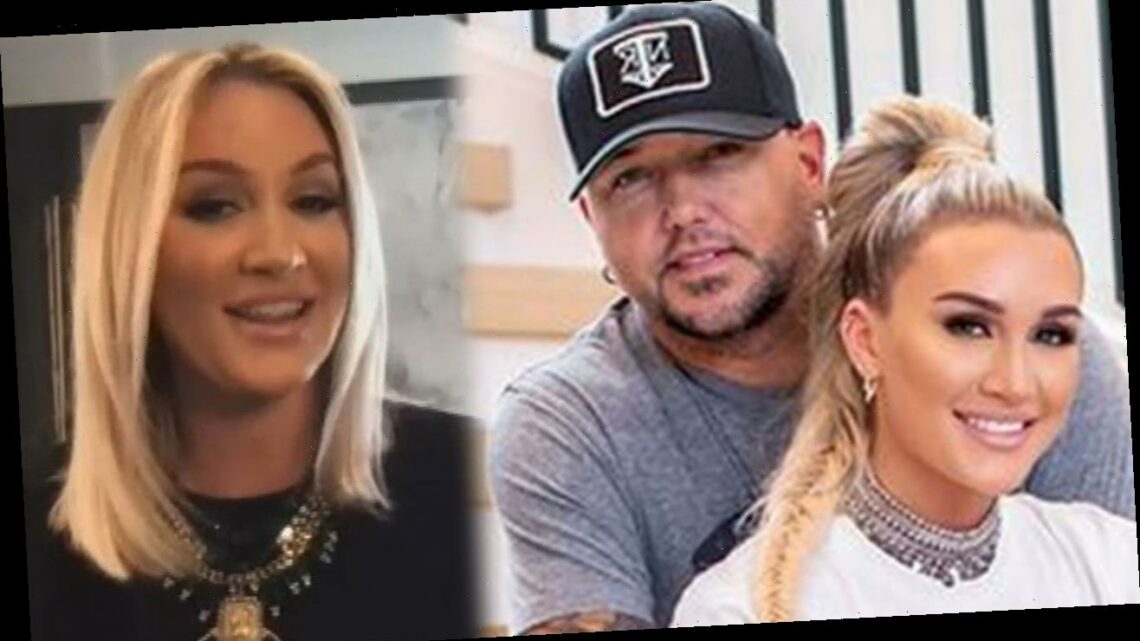 Brittany Aldean and her husband, Jason Aldean, are an inspiring couple. The cute pair has gone through a lot in their six years of marriage, and Brittany is opening up about their plans for the future of their family, and a few secrets she’s learned to keep their marriage strong and healthy.

Speaking with ET’s Cassie DiLaura this week, Brittany said that one important skill for keeping their bond strong is all about “picking your battles.”

“So agreeing to disagree,” she continued. “You can argue sometimes but [it’s about] being aware of ‘OK, you know, we’re just different people and that’s OK.'”

Another important key to keeping the spark alive in their marriage is “making time for ourselves.”

“It’s very tough with two babies. So at night, that’s our time,” Brittany shared. “We try to put the phones down after a certain time, we have a little wine. I’ve gotten Jason into liking wine, which is shocking. His friends are probably gonna give him a hard time… but we drink some red wine together sometimes and watch our shows and yeah, that’s our time to hang out.”

As it turns out, it seems like that might just be enough for the couple. When asked if they have any plans on expanding the family, Brittany said fairly definitively, “No.”

“Jason shot me down real quick after our second,” she said with a laugh. “I think it’s because he keeps having girls and he’s like, ‘You can’t keep doing this.’ If it was a boy, maybe. But, no.”

Brittany said that right now, after this challenging past year, she’s going to focus most of her time and energy on making her health and wellness a priority in the coming months.

“I started my South Beach Diet again, and I love this diet particularly because it’s easy,” she shared. “I’m a mom. I don’t have a lot of time to be prepping cooking. It’s nice to have these frozen meals that are just easy to pop in the microwave, grab a snack to go or if I’m just feeling a little hungry, I can just get a little bar and still go to the playroom and play with the kids. It’s just easy. It’s attainable.”

For Brittany, achieving her fitness goals has a lot to do with both her physical health and her mental health, after previously struggling with postpartum issues including weight gain and feeling down.

“I feel like when you’re younger, you know, I used to dance for the NBA and at that point in my life, I was tiny, tiny, tiny, but rightfully so. I was working out almost seven days a week,” she recalled. “And you know, things change when you have children.”

“I gained 40 pounds with each child. After Memphis, I lost it pretty quickly, but then I had Navy immediately [after] and I could not lose about 20 pounds,” she added. “And I’ve just noticed that my body has completely changed. I mean, I birthed two children, so it should. But it was hard for me to mentally grasp. So now I think I’ve just changed my mindset a little bit.”

As someone living in the public eye, Brittany admitted that the pressure will always make someone feel like something is wrong with them, but she’s working to make herself happy outside of what others want from her.

“It just does not matter what you do. You’re either going to be too skinny or too big or your hair is not cute shorter. It’s not good long. I mean, it doesn’t matter,” she shared. “So I think just finding the confidence in yourself to realize that not everyone is going to be happy, but it’s not their life. You live your life and if it makes you happy then that’s what matters.”

Selfie-snapping Capitol Hill rioters could be charged with sedition