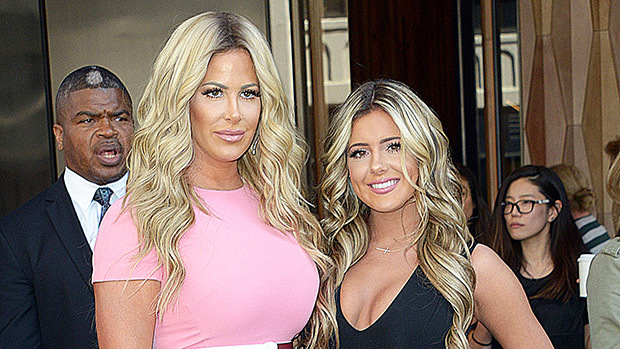 Brielle Biermann is so proud of how sexy her mom Kim Zolciak is after having six kids. She showed off a pic of her mother in a crop top flaunting her tiny waist and called her ‘hot.’

Brielle Biermann has always looked up to mom Kim Zolciak for how gorgeous she is, and the 22-year-old mini-me is singing the 40-year-old’s praises once again. She posted an Instagram photo on March 22 where Kim looked ridiculously youthful and incredibly slender. The Don’t Be Tardy star was wearing a heavy white sweater but it featureed a crop top to show off Kim’s tiny little waist and the skin of her toned abs. How is it that this women has has six kids, with one of the pregnancies being with twins? CLICK HERE TO SEE THE PIC.

Kim just looks flawless from head to toe. She’s wearing super tight skinny jeans and sporting an enviable thigh gap. The reality star must have been filming because her makeup is completely camera ready, with large false eyelashes and lots of gloss on her plumped up lips. For her hair, Kim chose a long wig with brown roots and blonde curls that cascade all the way down to her waistline. It’s a far cry from her fresh faced makeup and wig free selfie she shared with fans on March 14.

“1. HOW HOT IS MY MOM!!?!??? 2. DONT BE TARDY 30 min on BRAVO!! Kim’s 40TH bday episode if you were there tune in!!♥️my fav episode,” Brielle captioned the IG pic and fans were there for it! “KIM!!!! Are you serious!!!🔥🔥🔥🔥🔥🔥🔥” one fan wrote about how sexy she looked. “Mom goals !!! 🙌🏼 She gets more beautiful everyday!,” another wrote. Many people pointed out how much Brielle and Kim look alike with tons of comments that were posted about how much they look like twins. With as youthful as Kim appears in this pic, they really do look more like sisters than mother and daughter.

Kim’s March 22 birthday episode of Don’t be Tardy showed the festive event with a gambling-themed party. All of her friends and family turned out, including  her long-lost brother, Michael Zolciak. He brought some drama as his wife dissed Brielle for showing up at the party in a sexy see-through bra-baring dress. As Michael and his wife watched Kim pose for a photo with her daughters, his wife said, “Brielle’s half naked.” And he agreed, saying, “Uh, I think… I think they all are,” after he took a look at Kim, Brielle and sister, Ariana who was 16 at the time. Yeah they all dressed a little racy, but this was Kim’s big party and of course her girls were going to come wearing some eye catching looks.

Why isn't Mo Salah playing for Egypt against Niger and Nigeria?
World News