Home » Celebrities » Blake Moynes: How the Heck is He Back on The Bachelorette?!? 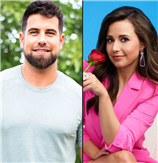 Blake Moynes: How the Heck is He Back on The Bachelorette?!?

The Bachelorette is about to get blown up.

Courtesy of a very familiar name.

On this Monday’s brand new episode of the ABC dating show, Katie Thurston will be greeted by an old face.

In a sneak peek at the June 28 installment, co-host Tayshia Adams wiill tease that “someone from my past reached out to me,” with the camera then cutting to a man that appears to be Blake Moynes.

We now know, of course, that it will, indeed, be Blake Moynes.

Yes, the same Blake Moynes who was a suitor on Clare Crawley’s season of The Bachelorette and who admitted to having fallen hard for that star — before she went ahead and got engaged to Dale Moss.

Moynes stuck around to try and get engaged to Adams after she took over for Crawley last year, claiming on air that he also developed feelings for Tayshia.

“If it was Tayshia from the beginning, I think my story would have been a little bit different,” Moynes told Us Weekly in December.

“It was tough because I felt, like, even emotionally, I could feel it, like, she could see something there.

“And it was so frustrating to get in the limo and be like, ‘There’s something here but you’re just not letting it happen.’ And that was the most unfortunate.”

Now, of course, Tayshia will be co-hosting a season that features Blake competing for the heart of another woman.

How did this come about?

As mentioned above, Adams claims that Moynes reached out to her in order to appear on Katie’s season — which is, of course, totally absurd.

This was all coordinated by Blake, The Bachelorette producers and probably Thurston, too.

No matter what Katie claimed in the recent past.

“I definitely knew who he was, which he’s also Tayshia’s ex-boyfriend! So that’s weird,” Thurston told Us Weekly several weeks ago.

“We had chatted before, but usually what happens is, like, the guys will reach out to the women once they’re eliminated and be like, ‘Good luck, you did great.’

On his first episode this Monday, Moynes won’t be shy about his agenda, either.

“I’m a little bit late to this, but Katie is the one, so I just had to show up,” Moynes says in a confessional. “I know that sh-t is gonna get crazy.”

As you might expect, Moynes’ arrival will have the other men feeling frustrated and annoyed, with one contestant telling him, “you need to get the f- out of my way.”

You can see for yourself here:

The drama also appears to push Thurston over the emotional edge.

“I came here to fall in love. Do I continue here, or do I just leave now?” Katie will say off camera … as she is shown sitting on the ground in tears.

Based on what we’ve heard, though?

Based on this new set of The Bachelorette spoilers?

And you may be shocked to learn the identity of the man that helps it do so.