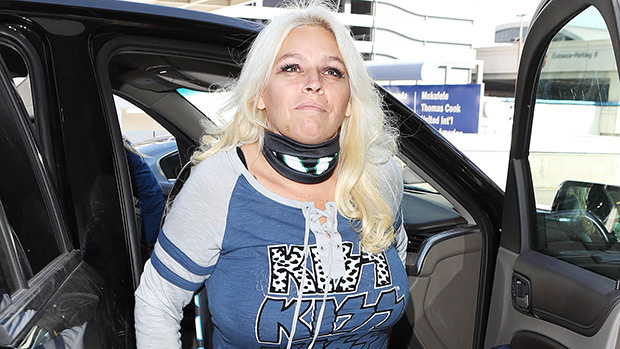 Beth Chapman is kicking throat cancer in the butt. The bounty hunter hiked a towering peak in Hawaii just 10 days after being hospitalized for not being able to breathe.

Beth Chapman is a warrior! Despite fighting a brutal battle with throat cancer, which landed her in the hospital recently, the Dog’s Most Wanted star isn’t taking it easy. She’s climbing literal mountains and kicking ass. Beth tweeted out a lovely photo of herself and her sweet dog posing on a high peak with the gorgeous ocean behind her. It’s captioned, “Hike’d makapuu with #dukekahanahighmakamakaoflola this morning boy did that feel good to make it to the top without any problems it’s such a personal accomplishment to continue to do the things I love #notdoingthat #fuckcancer #wgna @dogsmostwanted”. You can see her pic below!

Her triumphant tweet came the day after she was spotted out and about for the first time since her hospitalization for cancer complications. Beth looked radiant in her selfie, posted to Instagram in honor of Palm Sunday (April 14). Her hair was styled in voluminous curls, and she rocked a glamorous, black outfit that featured tons of cleavage. Beth, who was diagnosed with stage 4 cancer in November 2018, underwent an emergency procedure on April 6 to remove a blockage from her throat. A rep for the Chapman family confirmed to HollywoodLife that Beth was having trouble breathing, and that doctors were able to successfully treat a buildup of fluid in her lungs causing the issue. We’re so glad she’s on the mend!

Beth is such a badass. Her husband, Duane “Dog the Bounty Hunter” Chapman, told HollywoodLife EXCLUSIVELY at the end of March that his wife intended to be in Hawaii “chasing bad guys” for the rest of her days. Dog was emotional during the interview, and admitted that they’ve discussed her dying. “I’m not going to let her die,” he said.

Beth was actually first diagnosed with throat cancer in 2017, and underwent surgery to remove a tumor from her throat. Unfortunately, the family learned that the cancer came back in 2018. As Dog revealed in our interview, Beth has sworn off “conventional treatments” during her second bout with the disease. “They don’t work,” he told us. “There’s nothing, they’ve got nothing. They’ve got a bill to send to you.”

This Is, Hands Down, the Hardest-Working Concealer I Have Ever Tried