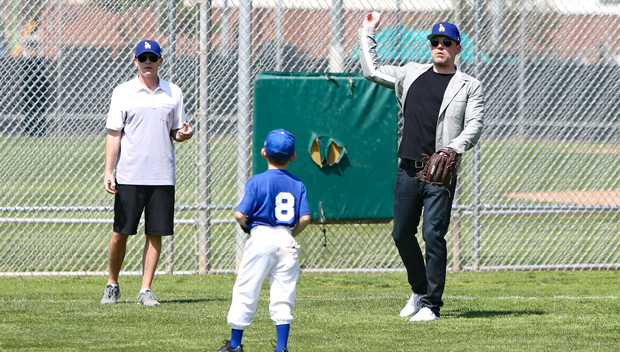 As his son Samuel‘s little league baseball coach, Ben Affleck, 46, is clearing knocking it out of the park. The father-son duo were spotted out at a park in Los Angeles on Mar. 24 practicing their throwing arm technique together. In addition to playing catch, Ben was seen pitching balls for Samuel to hone his at-bat swing. While Ben donned a Dodgers hat (Samuel’s team is the Dodgers and not the Red Sox, so no cause for alarm, fellow Bostonians) and some shades, Samuel was suited up in the team’s uniform. Overall, they looked like they had a great time.

Ben previously talked about coaching Samuel’s little league team in an interview with Ellen DeGeneres, 61, and while he seemed so excited to helm the team, Ben was a little iffy on the team’s name. “I’m a coach on the Little League team. It’s going great,” Affleck told Ellen on Mar. 14. “He’s awesome. It’s a lot of fun, the kids are great kids. I do have to wear a [Los Angeles] Dodgers hat because that is the team. But you know, it’s one of those things you love it so much.”

Ben’s practice with Samuel comes one day after the proud dad took all of his children on a fun outing in Los Angeles. Ben and Samuel were accompanied by Violet, 13, and Seraphina, 10, for a trip to the movies. And while Ben and the kids were at the cinema, his ex-wife Jennifer Garner, 46, was spotted get a little pampering in. Wearing a sweatshirt that said “Love is Love is Love is Love,” Garner was spotted heading to the nail salon.

Ben previously opened up about being a dad after his split from Garner on the Today show on Mar. 4. “I hope I’m a pretty good dad. I certainly try very hard,” he admitted. “I’m lucky they’ve got a great mom, and she helps out a great deal with making sure that we co-parent in as good a way as possible.”