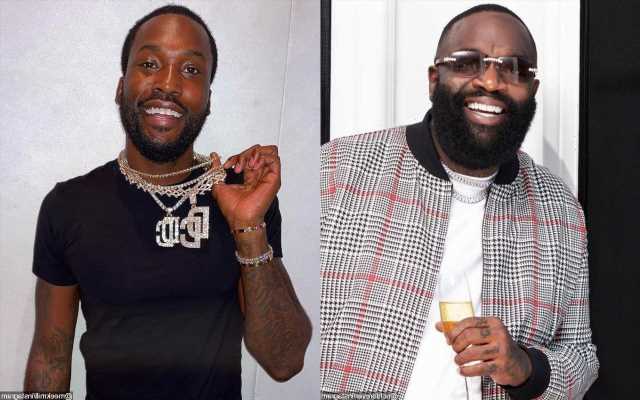 Fans suspect that there’s a rift between the Maybach Music Group founder and his own protege after DJ Akademiks suggests that an artist banned his boss from his birthday bash.

AceShowbiz – Is there bad blood between Rick Ross and Meek Mill? Speculation is rife that the hip-hop mogul and his own protege are beefing after DJ Akademiks told a story about an unnamed artist who banned his boss from his birthday party.

Akademiks then suggested that the rift was over the younger artist’s desire to exit his current label. “One of your favorite artists who’s claiming that they’re ‘lit,’ they’re a ‘boss,’ they do ‘whatever’ – they’re signed to another n***a,” so he claimed. “And allegedly, they’re beefing with the other n***a cuz they’re tryna get off the label.”

He continued without naming names, “I hear they want off the label. This been a ongoing conversation. The n***a who they’re signed to showed up to their party, [and] they were not happy. When that person showed up, there was issues.”

Hearing this, fans quickly took to Twitter to throw their guesses on the allegedly beefing artists. “wasn’t Ross just at Meek’s bday party this past weekend?” one person pointed out the fact. Another tried to decipher the clues, “damn Meek and Ross beefing?”

A third one echoed, “Meek Mill beefing with Rick Ross !?? man MMG brothers not in good terms.” Another shared her/his theory, “Meek been hanging with and doing business with Jigga Man more than he has with Ross. Meek hasn’t seemed like a MMG artist since 2014 tbh.”

“Akademiks was saying Meek didn’t let Ross into his section at Liv for his birthday,” someone else speculated what might cause the beef, “Of course it’s rumors for now but Ak was like Meek been trying to get out his MMG contract for months but Ross won’t let em.”