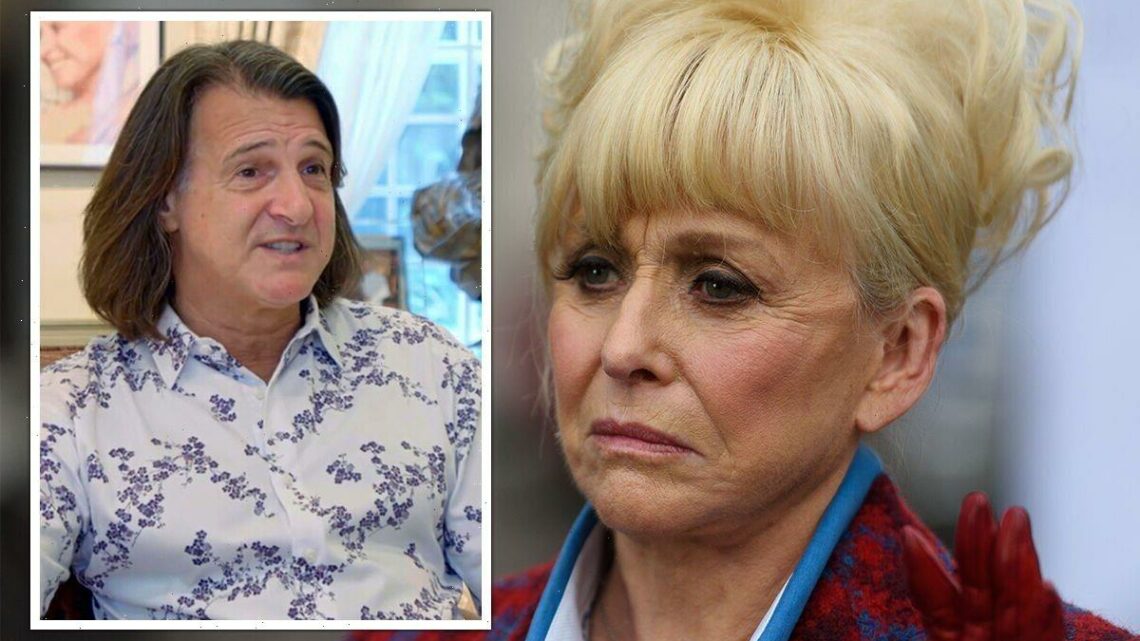 Barbara Windsor's husband Scott on how they fell in love

Actor Scott Mitchell married Barbara Windsor in 2000, when he was 37 and she was 63. The couple knew their age gap would “cause a stir” and actually kept their relationship secret at the start because of it.

The iconic actress was married three times in her life, first to Ronnie Knight in 1964, then to Stephen Hollings in 1986 after her first divorce.

Then, in 2000, Barbara married for the last time to young actor Scott.

The couple had met through Scott’s parents, who had invited him to meet Barbara, hoping the veteran actress could impart some wisdom on their son who was just starting out on his own acting career.

On BBC’s The One Show last night, Scott spoke about his late wife in anticipation of his upcoming book, which she predicted he would write.

Scott explained: “She just said to me: ‘One day when I’m gone they will ask you to do a book.

“’You’ll do a good one, I know that, but you must be honest otherwise there’s no point in doing it’.”

Although the world knew Barbara as a superstar, Scott explained that she “was simply Barb, the love of my life”.

The couple first met when Scott, fresh out of drama school, nipped down to Hove to see his parents.

They begged him to stay for dinner as “our friend Barbara Windsor’s coming” but Scott wasn’t all that interested.

Not knowing he was about to meet the love of his life, he had replied: “I’m sure she’s really nice, but do you really think I want to have dinner with you and Barbara Windsor?”

They convinced the budding actor to stay to get career advice from “a true professional”.

Scott continued: “Over the next few months we saw each other a lot and we fell in love. We were aware from the start that the 26-year age gap would cause a stir.”

At the start, Scott said Barbara would tell people he was simply “a mate” or giving her a helping hand at the moment.

However, the couple were not able to stay out of the limelight for long due to Dame Barbara’s fame.

The actress was a household name due to her portrayal of Peggy Mitchell on EastEnders.

Once her EastEnders fame took off, Scott admitted that they no longer tried to hide as it was a futile endeavour.

He said: “She was instantly recognisable. I used to say it was like walking down the street with Tinkerbell.”

The duo got married in 2000, living out their happily ever after for 14 years until tragedy struck when Barbara was diagnosed with Alzheimer’s.

Scott shared: “When we eventually shared the news we received massive support from the public. In 2019 I ran the London Marathon to raise money for Alzheimer’s charities, supported by some of the EastEnders cast.”

He jokingly recalled telling Barbara about his marathon plans, only for her to respond: “Your legs are too little to run.”

After crossing the finishing line, Scott’s first thought was to call Barbara, exclaiming “I’ve just run the marathon!”. However, her quick-witted response was just to ask “what time will you be home?”

Scott lovingly stayed by Barbara’s side as her Alzheimer’s worsened and in December 2020, the acclaimed actress eventually succumbed to the disease.

Before her death, the actress gave some parting advice to her loving spouse, saying: “Listen darling, I’ll go first cause that’s the way it will be. I want you to be broken hearted, I want devastation.

“But then I want you to pick yourself up and live the best possible life you can.”

Scott’s new book, By Your Side: My Life Loving Barbara Windsor, releases on October 13 and is available for pre-order here.

How many children does Elon Musk have? – The Sun | The Sun