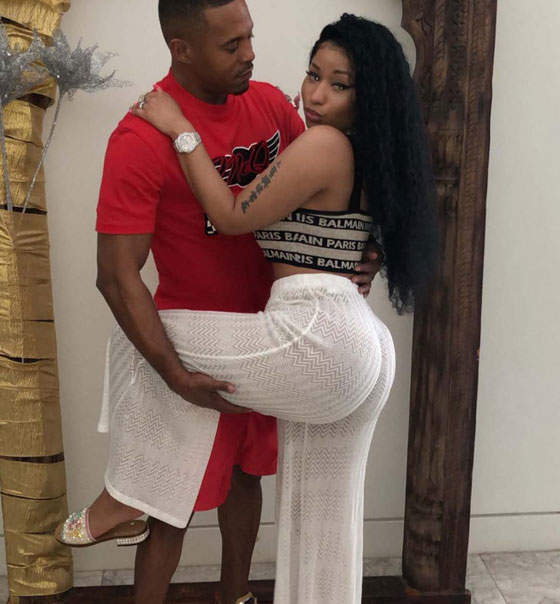 Awww, What A Lovely Picture Of Nicki Minaj And Her Convicted Sex Offender Boyfriend (UPDATE) Scrolling through Nicki Minaj’s contacts on her phone must be a lot like scrolling through the sex offender registry list (and good news for her is that if her contacts ever get deleted for some reason, she can look to the sex offender registry list to find her friend). Because Nicki worked with and supported a pedophile, she supported her brother who was found guilty of child rape, and now she’s getting on a convicted sex offender who also went to prison for killing a man. Who knew that Nick Minaj is the Mama June of hip-hop?

Nicki has been seen with a dude named Kenneth Petty for at least a month, and over the weekend, she went Instagram official with their barf-inducing love by posting a picture of her looking like she’s pooting out a silicone-laced fart as he’s obviously too blinded by dollar signs to notice that she’s clearly over the age of 18. Nicki also dragged Adele into it with that quote:

Did you ever make it out of that town where nothing ever happens?… it’s no secret… that the both of us… are running out of time…???♥️

Nicki and her PedoBoo are on vacation for her 36th birthday, and she also posted this:

Ever since Nicki has been seen with Kenny Petty, internet detectives pulled out the receipts proving he’s a major catch. But after Nicki went Instagram official with him, the media pulled out the receipts too. TMZ and The Blast say that 40-year-old Kenny Petty served 4 years in prison for pulling a knife on and trying to rape a 16-year-old girl in 1994. Because of the conviction, he’s a registered sex offender in the state of New York.  Just a few years after getting out of the chokey, Petty the Pedo was arrested and charged with murder in Queens, where both he and Nicki are from. I guess Nicki’s coochie must be a regular felony rehabilitation center.

Queens County prosecutors said that at 12:30 in the morning on April 27, 2002, Kenny Petty shot a man named Lamont Robinson to death. He was charged with second degree murder, but in 2006, he took a plea deal and the charge was knocked down to manslaughter. He was sentenced to 10 years in prison, but he only served 7 and was released in May 2013. He was put on supervise released for 5 years. He’s also a father of 5 kids. And as to how Nicki met this Prince Charming… The rumor on Twitter is that she went to Queens to pass out free turkeys for Thanksgiving, and got the loin-quivers over the biggest turkey of them all: Kenny Petty.

Nicki better hold on tight to that catch, because I’m sure every chick in the Tri-State area is swooning herself inside/out for a broke sex offender and killer with five kids.

And I guess one way to avoid friend of The Bloods Cardi B from throwing another shoe at you is to get yourself a piece who is a two-time felon and has gone to prison for shooting someone dead. But I don’t know, I’d just get myself another bodyguard instead. That’s just me.

#NickiMinaj addresses the accusations against her new bae ?