Home » Celebrities » Artist Jessica Ewud Is Building An Empire, One LEGO Brick At A Time 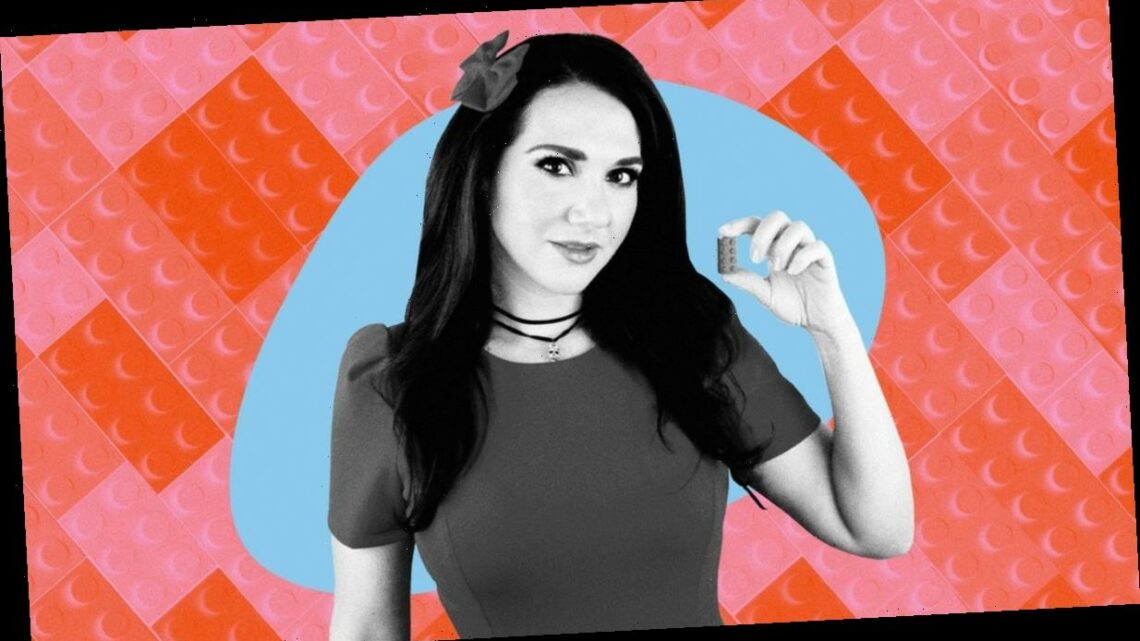 Artist Jessica Ewud Is Building An Empire, One LEGO Brick At A Time

Jessica Ragzy Ewud’s career as a full-time LEGO artist didn’t have the best foundation to start with. As a kid, she was told the popular building block toy wasn’t meant for girls. Now, as an artist featured in galleries alongside Salvador Dalí, Jeff Koons, and Ron English, Ewud has adopted LEGOs as her primary medium — and is showing how she can use the toys to build an empire within a male-dominated art industry.

While her work may seem playful at first, there’s often more than meets the eye. In one of her most well-noted 2019 pieces, LEGO Lincoln, Ewud took advantage of the building blocks’ three-dimensional nature to embed excerpts of the Gettysburg Address in the red-and-white texture behind the president’s portrait. In her 2020 Warhol-themed series, Ewud paid homage to the artist’s groundbreaking pop-art style, and incorporated his name into her pieces using intricate three-dimensional patterns in the background.

“I draw a lot of my ideas from history and the sciences,” Ewud tells Elite Daily. “I like to make art that’s not just inspiring and beautiful to look at, but also informative in some way.”

Her medium may be a toy, but Ewud isn’t playing around with her art. She prepares for her workday by waking up early and following a strict routine, including exercise and research. “Some of the most successful entrepreneurs in the world all have one thing in common: They’ve got their morning routine down,” she explains. “I try to follow their example.” Although it’s been harder to maintain a routine throughout the tumult of 2020, Ewud says staying motivated has been a lesson in adaptability. “The pandemic we’re in is terrible, and it’s blindsided a lot of people, including me. However, it’s taught me how to handle the curveballs in creative ways.”

Before the pandemic, Ewud would draw inspiration for her work by taking daily trips to the public library. There, she’d check out books on subjects like art, history, architecture, and science to inspire her work. Now, she finds inspiration in sharing her knowledge of art with other young creatives. “Because of the pandemic, I started teaching online art classes for kids,” she says. “I found that I love sharing my creativity like this. I never would have thought I’d find so much joy in it, but it’s helped me realize how great it feels to inspire others through art.” She knows how critical it is for children to have educators who encourage, rather than limit them — after all, it was a schoolteacher who told her LEGO blocks weren’t meant for girls when she was a young student.

Although Ewud has found her footing as an artist, her journey hasn’t always been an easy one. As a finance major at Western Connecticut State University, she juggled waiting tables, working internships, and creating art part-time to pay her tuition. “I never believed I’d be able to do art full-time,” she says, noting how difficult it is to make a living in the notoriously competitive art world. But she’d always make time to enter art shows, no matter how hectic her schedule became. “I always thought, ‘Oh, I’ll do art when I retire,’ or, ‘It’s just a hobby for me.’ I never opened my mind to becoming a professional artist until much later in life.”

When she graduated college in 2010, just two years after the start of the 2008 recession, Ewud had trouble finding a job in the finance field. “I couldn’t find consistent work, and I remember thinking, ‘What am I gonna do now?’” Searching for guidance, Ewud found a supporter in Robert G. Wilson, an abstract painter and artist who encouraged her to pursue her dreams. “He saw potential in me to become a successful muralist. So, I decided to take his advice and use my creative skills to help support myself.” With nothing to lose, she dove into painting murals, using windows and the sides of buildings to create larger-than-life scenes in public spaces.

Still, Ewud didn’t think of her art as a full-time gig. She cycled through various office jobs and even assumed a role as the executive director of a nonprofit charity organization for eight years. But she never lost sight of what she truly wanted. “My passion had always been for the arts, but I felt like I had spent my whole life shying away,” she explains. She was afraid that if she fully immersed herself in her dream and still emerged with nothing to show for it, she’d feel like a failure. “I was scared. But at the same time, I just had to find the courage within myself to go for it full-time.”

And Ewud did experience failure during these in-between stages. She realized that in a lot of ways, the art world was just as fierce as the finance business. Her work was quickly dismissed and picked apart by dealers and critics, and some galleries wouldn’t even look at her pieces to consider for showings. “The industry is brutal,” she says. She had to show a lot of grit when taking rejection. “If I’d listened to the first 10 people who didn’t value my work, I wouldn’t be where I am today,” she adds.

In 2019, Ewud finally experienced a breakthrough. The turning point in her dream career came to her, quite literally, in a dream. In the middle of the night, Ewud woke up with an idea for a piece: a portrait of Abraham Lincoln made completely out of LEGOs. “I had to write it down at that exact moment because I thought it was brilliant, and because I knew I’d forget if I didn’t,” Ewud laughs. “I still have the note in my phone, actually.” Although she hadn’t grown up playing with the popular building blocks, she immediately decided to go all in. The very next morning, she bought the supplies she needed to start building her very first LEGO piece, LEGO Lincoln. When it was finished, Ewud wasn’t the only one who thought it was brilliant. “That was the piece that actually caught the eye of a lot of prestigious galleries,” she says. “That idea really took my art and my career to the next level.” Since then, Ewud has created several different versions of the original work, which was displayed at Rockefeller Center in New York City in 2019 and is still up for sale on her website today.

As Ewud began to receive an outpouring of recognition for her work, more and more opportunities came her way. In 2019, she got an unexpected call from a talent scout who wanted her to audition for Fox’s LEGO Masters show, which premiered on Feb. 5, 2020. “I didn’t know about the show at all before they called,” Ewud says. “Here I was, making LEGO art all on my own, and I get this call saying, ‘Hey, we’ve seen your art and we love it.’ It was like the universe was rewarding me for going all in on my dream.” Ewud was chosen to compete on the show over thousands of other artists.

Over 10 episodes, Ewud and her teammate, Samuel Hatmaker, built several masterpieces, including their intricate final build The Peacock and the Monkey, which is still on display at LEGOland as of December 2020. Ultimately, Ewud and Hatmaker were eliminated in the season finale. Although Ewud didn’t win the grand prize, she’s thankful for the opportunity provided by the show. “For me, it wasn’t even about winning. It was about showcasing my craft,” she says. “It’s every artist’s dream to display their skills on a nationwide platform, and I’m very grateful for that. It was really a dream come true.” Looking down the road, Ewud hopes to expand her artistic empire to help inspire and support other creative hopefuls.

Her path to being a working artist has given Ewud a very different outlook on failure. “Rejection in this industry is unavoidable, and failure is going to come no matter what,” she says. “The important thing to remember is to advocate for yourself. It’s not arrogant to know that you’re good at what you do. If you believe in your work and in your craft, stand by it.”

In Elite Daily’s I Have The Job You Want series, we tell the stories of people working in the most ridiculous, unbelievable, and totally envy-inducing fields you never thought possible. Read more here.

Simone Biles was giddy when her boyfriend, Jonathan Owens, was promoted and played for the Houston Texans