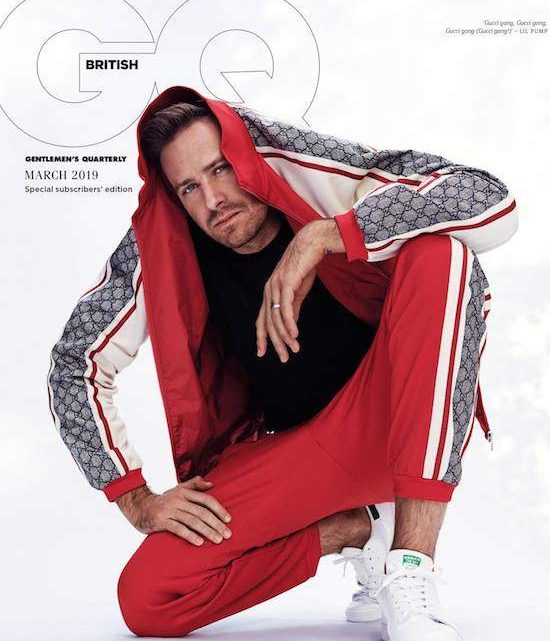 Armie Hammer Doesn’t Take His Family’s Moolah, But He Will Drag A Stan Lee Poser Just because Armie Hammer may SEEM like the guy from a really wealthy family (he is), it doesn’t mean he’s talking their money. What a moron, right? Armie is 32, but he sure sounds 92 sometimes. In a recent interview with British GQ, Armie says he’s not a normal millennial, he’s a cool millennial who gets the dry heaves when he sees avocado toast on a menu. He didn’t say that, but he may as well have since it’s about the only thing he didn’t bitch about. He walked back an apology and maintains people were tacky with their Stan Lee tributes on social media AND wants to remind you he doesn’t take a red cent from his wealthy family.

British GQ asked Armie in an upcoming profile about how he seemed to drag celebrities like Robert Downey Jr. and Chris Pratt for posting photos with Stan Lee after he died last year. Armie previously apologized and said he had been an “asshat” over the whole thing, and, no, that wasn’t referring to a position he used in Call Me By Your Name. It seems like Armie ain’t sorry anymore:

“Let me be clear. I do not feel badly for the people that I offended who met Stan Lee once and were capitalizing and masking self-promotion as false grief.”

Well, then. I guess Armie didn’t care for Iron Man OR Guardians Of The Galaxy! Actually, he says it’s all tied to how millennials are self-absorbed and it really grates him when he sees that generation poses THOT selfies from funerals or other important events. Mind you, Armie IS a millennial, but don’t tell him that:

“I am a millennial. You’re right. I totally should. And I can’t say I am not a millennial, but I’m not a millennial. I don’t get it. It doesn’t resonate with me. I don’t know why millennials will go to a wedding and take a picture of themselves on the dance floor and then post it on social media and be like, ‘Congratulations to Sarah and Jeff, so happy for you guys!’ Just what the hell is that? That just doesn’t make any sense to me.”

You know what else doesn’t make sense? This rich a-hole not taking a dime from his rich parents. I’m all for pride and shit, but believe me – if I had family money, you can bet your ass I wouldn’t abstain and “proudly” drink the free coffee from my office every day since I can’t afford it elsewhere. I’d take the trust fund and have Frappuccino Monday, Frappuccino Tuesday, Frappuccino…OK, you get it. Anyway, Armie makes it sound like it was an important life impasse in making that choice…kinda like deciding whether to order Domino’s or Little Caesar’s:

“It was a conversation I had with myself: you can be this person or you cannot. I would rather not. It wasn’t about cutting ties or bonds with my parents or anything like that. It was about strengthening myself.”

Speaking of strengthening yourself through shit that ain’t family cash or wedding selfies, here is what Armie thinks is strengthening content on social media:

Harper woke up at 5:00am this morning and said she wanted to draw the Eiffel Tower…. #nailedit

FINALLY! A Hammer I can find common ground with!