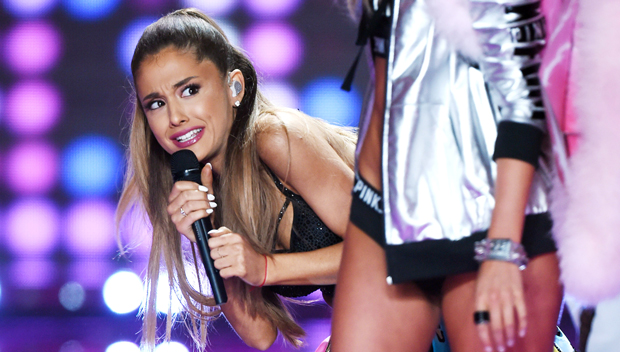 This is a whole mood right here! Ariana Grande threw it way back on Instagram with a behind-the-scenes pic of herself at the 2014 Victoria’s Secret Fashion show — you know — the one where she was hit in the face by an Angel’s wing and made the most cringeworthy of faces. In the photo she shared to commemorate the fourth anniversary of that show, Ariana also gives the camera a Jim Halpert-esque look while Ed Sheeran poses with Alessandra Ambrosio. Check out the hilarious photo below!

We reported earlier how not only did Ariana reference Pete Davidson‘s penis twice in the music video for “Thank U, Next,” apparently Pete loved her message that she’d “always” love him. “Pete was really moved by Ariana’s ‘Thank U Next’ video,” a source close to Pete told HollywoodLife EXCLUSIVELY. “He found it really touching that she included such a sweet and loving shout out to him. Pete wasn’t sure what to expect, but Ariana is a total sweetheart so he wasn’t bracing himself for anything bad or nasty, but still, he wasn’t expecting anything quite so loving.”

However, since her split with Pete, it seems that Ariana has emotionally moved on. Not only has she covered up or altered tattoos that reference Pete, but her huge engagement ring is gone. Replacing the bling with a friendship ring in a recent Boomerang video with her friends, she captioned another picture of her with the new ring, writing, “…. n I’m so good with that.”

four years ago today! this is how my whole life feels.

four years ago today! this is how my whole life feels.

We’ll keep you posted with all of the latest news about Ariana. In the meantime, check out all of her most recent photos in our gallery above.

Ray J Details Struggle With Pre-Diabetes, Reveals How He Beat The Condition