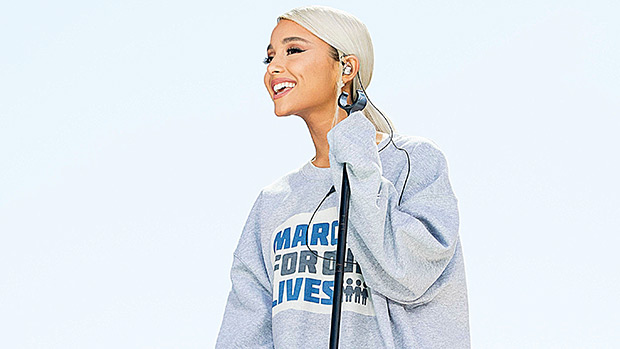 Ariana Grande just dropped the ‘thank u, next’ video, but it’s a new clip that has people talking. Some called her out for allegedly sounding different than her normal voice, and they’re not happy.

Ariana Grande, 25, was just named Billboard‘s Woman of the Year 2018, and the video from the magazine celebrating that is raising some eyebrows. Some fans who watched the vid, which shows Ariana reacting to a series of childhood photos, pointed out that she sounds a little… different. Specifically, they’re talking about an odd moment, which happens at the 2:25 mark in the video above.

She’s talking about a cute photo of herself and her nonna, in which a toddler Ari is eating a cookie and giving some North West-level sassy face. Describing it, she says in a heavy accent, “bitch, dis my cookie, dis my juice, okay? Carry on. Thank you, next. That’s what this baby picture says. That’s crazy. If my kid ever looks at me like that, I’m gonna say oooh sh*t.” She does not sound like herself.

Fans chimed in on Twitter and in the YouTube comments immediately. “err her voice?” @stilettoheel wrote. “it’s cringey asf,” @babie_tinkk tweeted. “Omg she’s so 💀,” @el_yawm said. And @PrettyPettiiii tweeted, “i really love her, i wish she’d stop doing this 😭” They’re not about it. Some are saying that she’s putting on an inflection to sound black, while others feel that she actually picked up a New York accent from her former fiancé, Pete Davidson,who’s from Staten Island. See a clip below, and the full video above, and decide!

Speaking of Ariana Grande videos… she just dropped her highly-anticipated music video for “thank u, next” which had fans everywhere in a frenzy. She went through some of the best rom-coms of all time — Legally Blonde, Mean Girls, Bring It On, 13 Going On 30 — and nailed them all.

Ed Sheeran got criticized for underdressing for Beyonce duet at festival