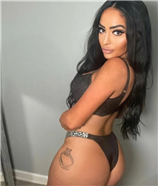 If you’ve been following the latest news surrounding Angelina Pivarnick, then you know that the last few months have been pretty rough for Staten Island’s most infamous resident.

Even before her roommates accused Angelina of cheating on Chris Larangeira, it seemed like Pivarnick’s marriage was very much on the rocks.

Reports that Angelina and Chris are divorced have been circulating non-stop on social media lately.

Currently, it seems that both parties are keeping the truth of their situation a secret, possibly out of a contractual obligation to the producers of Jersey Shore.

(Let’s face it — the Angelina cheating scandal is really the only drama to be found this season, so it makes sense that MTV would be eager to keep it going.)

There were reports in late June that Angelina had filed for divorce from Chris, but no documentation surfaced and nothing was confirmed.

Now, however, fans are convinced that Angelina has subtly broken the news that she’s 100 percent single.

In true Angelina fashion, she did so not with a formal announcement but with a new face.

Pivarnick’s love of plastic surgery is no secret, and her latest look has prompted speculation that she decided to celebrate her divorce with some of the most extensive “work” of her career.

As you can see in the photo below, gone is Angelina’s Roman nose, which was arguably her most recognizable feature.

Yes, from the neck down, everything on Angelina is getting bigger.

The features on her face, however, are much smaller than they were when she first became famous.

At least she waited until she was famous enough to afford the nation’s top-tier plastic surgeons.

But Angelina had to know that even with the world’s most expensive talent re-tooling her face, fans were gonna notice her latest change.

As recently as last year, Pivarnick maintained that her breast enhancement was the only invasive cosmetic procedure she had undergone.

“I never ever got a nose job. Same nose since I was born. So nice try on that. I just contour it now with makeup!” Angelina wrote on Instagram.

“MY ONLY SURGERY HAS BEEN MY BOOBS! Ask my plastic surgeon. He knows. I’ve gotten injections and that’s it!”

We’re guessing that Angelina won’t be making that claim anymore.

As for whether or not the new look is a sign that Angelina is newly single — well, that remains unclear.

All we know at this point is that Chris was surprisingly uninterested in the video that allegedly showed Pivarnick screaming at her side-piece.

“I knew Chris wouldn’t care. He didn’t want to see them,” Angelina said on the most recent episode of Shore.

“There’s no secrets, you know what I mean. This is our marriage.”

We guess the only secret at this point is whether or not these two are still married!